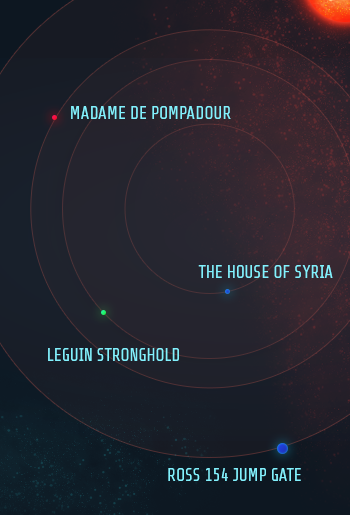 The stations of Ross 154 consist of Leguin Stronghold, House of Syria, Madame de Pompadour, and the system’s jumpgate station. If initial communications are to be understood, (and it has proved a challenge) there exists a fascinating dichotomy in a number of ideologies here. Social currency, semantics, even meaning in some cases, have all evolved slightly differently on each station, during their collective time apart from each other and the rest of humanity.

This has led to a number of difficulties in subsequent communications and even trust of one and other. This is especially pertinent as the system contains two Consortium stations (The house of Syria and Ross 154 Jumpgate), one of the Gaule Protectorate (Madame de Pompadour), and one that is maintaining an independent status (Leguin Stronghold).

While initial information is unconfirmed, there does seem to be a fair amount of contention towards Leguin Stronghold’s Independent status, with both other factions vying to bring it into the fold. The communicational idiosyncrasies of each station, however, provide a barrier and fascinating challenge.

LeGuin was once a Consortium civilian station, a small man-made Stanford Torus style facility in the Ross 154 system. It was meant to be a self-sufficient colony, recycling nearly 100% of its waste and sending automated bots to mine for water or metals from nearby asteroids when needed. While Ross 154’s light is weak, the station is close enough to the star to meet its power needs.

The station was originally billed as a small town ‘where everyone knows your name’. It was the first of what were meant to be many small stations circling Ross 154, focused on comfortable civilian life.

Not long after it was established and populated, the Catastrophe struck. As everywhere, the results were devastating. Many were lost, and the few who were not, barely survived.

After a tense few cycles spent clearing corpses and waiting for communications, the people decided to continue living their small lives as best as they could.

By the time the Consortium finally reached out to the station they had already spent time dismantling and redesigning cultural and hierarchical systems, and formally declared themselves Independent. The Consortium, presumably, could easily have taken the station back by force, given how few people lived there, but it would have been a terrible PR move. The media picked up on this lost station of peace-loving, strangely-communicating people who wouldn’t relent their claim to LeGuin. The House of Syria, their tech loving neighbors, helped push this narrative as far as Tau Station, at which point the Consortium decided to win over the people of LeGuin Stronghold with friendship instead.

Many features of this station derive from the Torus’ ring shape. Travelers can arrive in the central hub, located in the middle disk which doesn’t rotate. From there they can take a high-speed shuttle through the spokes into the rotating ring itself. Due to its proximity to the dim Ross 154 and sets of mirrors that reflect sunlight in the right direction, the station is often bathed in natural (albeit red) light.

As a small man-made station, LeGuin’s gravity is somewhat weak, and there are areas (such as its connecting spokes and central hub) which have no gravity. The rotation of the ring itself may also cause initial discomfort to travelers, especially as they change from spokes to ring, but it’s easy enough to get used to.

Another interesting idiosyncrasy we have noted is that language and communication have evolved in a rather unique way here. A particular shift in speech patterns, brought about by a need to wear masks during the Catastrophe, incorporates what appears to be a dialect designed for more emotional openness and semantic transparency of intent. Phrases are often prefixed with an emotion or descriptive word that readies the listener for a sentence they are about to hear. The sentence itself tends to be completely in the form of metaphor!

While the Catastrophe cost many lives, it also served as a reawakening for Madame de Pompadour, a station found inside a gigantic asteroid crater. The deadly floods that took so many lives also transformed the Pompadour into a beautiful station of canals and waterways, and since those tragic days, local artists and architects have turned the once dull station into an aquatic wonderland. Madame de Pompadour has been a local holiday destination for many cycles, and with Ross 154’s Jump Gate now ready for Citizen traffic, tourists are now arriving from far and wide. As the only Gaule station within the system, Madame de Pompadour aims to showcase the best of their citizenry, whether they focus on arts, science, philosophy or military might. Their focus on excellence helps their Citizens reach for great heights. Being sent to Pompadour is the greatest honor, while being asked to leave represents an immense loss.

As the militaristic entry-point into the system, the Ross 154 Jump Gate takes its role as protector of the system seriously. Every station leader has focused on protecting both the civilians in the Jump Gate itself, as well as the other Consortium stations. In the past, Consortium soldiers would come here for military drills, to admire how organized and regimented everything was, and how much the people appreciated the Consortium peacekeepers – a shining example of what things could be like. The local citizens almost relished their lack of station identity – they were a military Jump Gate, and they would fulfill that role, nothing more.

Judging from the feeds we have been able to connect to, many buildings look the same, in regocrete gray, with large holo-signs claiming their purpose being the only way to tell them apart. The only exception is the residential area, but even then, structures are very uniform, set apart only by their inhabitant’s decorations.

There is, obviously, a strong military presence here and they are strict in observing the law, but individual soldiers are friendly to residents and visitors (thus far only from the other stations of the system). Their identity as caretakers is highlighted during their training, and one can often see soldiers helping residents and visitors when they have problems. Of course, not all people look comfortable with the soldiers…

The station is otherwise clean and well-kept, with people lining up in orderly queues, folks are generally quite formal.

Following the Consortium ethos, there’s a prevailing feeling that as long as you respect the rules, uphold the peace and generally do things right, you’re free to do what you want. Many people in this station are here out of a sense of duty to the Consortium, trying to keep the jump gate running, protecting the system, and hoping Le Guin Stronghold will rejoin the Consortium peacefully.

In terms of entertainment, the station has adopted a love of e-sports from their ongoing (but some say begrudging) relationship with their neighbor, The House of Syria.

The chance to let off steam and promote team-building, while appealing to their righteousness and competitive spirit, has made e-sports a perfect fit for the Jump Gate. There appears to be a big tournament each cycle (set up by House of Syria technicians) which is a huge attraction, bringing people in from other stations and, we soon foresee, other systems, including many participants from Syria.

The military believes that seeing soldiers participate in the tournament can show civilians that everyone likes to unwind sometimes… But anyone watching the tournament can see that they still treat the game like a military exercise. We found that this, however, does not diminish its entertainment value!

The House of Syria

The House of Syria is one of four stations of the Ross 154 system and the second (and, currently, last here) bearing allegiance to the Consortium.

While both the Jump Gate itself and The House of Syria are, as mentioned, Consortium, the local denizens view the former as the ‘strict, older brother’ as the feeling in this station is a little more open and less structured. There is even a loose friendship with certain factions of Freebooters for ideas and tech.

It is, in fact, their strong connection to technology that allows The House of Syria such freedom and flexibility. We understand that much of the station utilizes and benefits from fairly sophisticated Omni Reality software and that a large bulk of the station’s beauty is best seen through one’s CORETECHS!

A bulk of the station’s culture is taken up by OmReAthletics, (OmRe standing for Omni Reality) a hobby that it shares with its elder sibling, the Jump Gate. A central amphitheater dedicated to various types of OmReAthletic events is one of the most visually stunning pieces of architecture on the station. Indeed, large numbers of citizens can often be seen sporting OmRe Headsets and haptic suits. There appears to be a general ideology that, while the CORETECHS is indeed sophisticated enough a technology to allow one to compete, the true “O-thletes” invest in dedicated hardware.

With the Jumpgate’s alignment almost complete, we hope to be on one of the first shuttles over as we look forward to exploring the unique facets of The House of Syria as soon as possible!