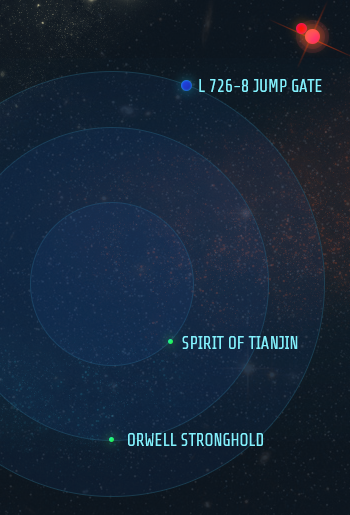 This binary star system was originally colonized as part of a Consortium science mission to study its impressive flare stars. In addition to the Jump Gate, two other stations were established, each orbiting one of the system’s stars. The spectacularly-volatile UV Ceti in particular fascinated some of humanity’s brightest minds back in the Before, at least while bright minds could still be found in lethargic post-scarcity civilization.

But, in the wake of the Catastrophe, priorities changed. The Consortium retained control of the Jump Gate, while mothballing the former research facilities of Orwell Stronghold and Spirit of Tianjin. Over time, as the post-Cat consolidation advanced, the latter stations were given over, in somewhat shady handovers, to independent interests; the Benevolent Dynamics corporation and a wealthy entertainment mogul, Etheel Hayes, respectively.

The Jump Gate, though a vital transit hub and still Consortium-affiliated, developed a rather unique culture. It’s now home to the cultish Roswell Division, who advocate for alien-centric Catastrophe explanations and live according to a warped notion of old Earth culture. Today, L 726-8 has a reputation as a bizarre system, its three flare-proof stations containing some of humanity’s strangest post-Catastrophe cultures. 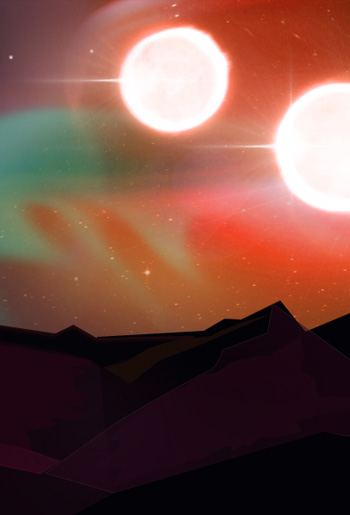 L 726-8 Jump Gate is a well-connected Jump Gate which sees the foot traffic of travelers of all stripes. While many pass through, few harbor a desire to linger here, mostly due to a local cult of alien believers called “The Roswell Division”. Although officially affiliated with the Consortium, this place retains a unique atmosphere thanks to the Division’s influence. Visitors are greeted at the Port by the smiling, clean-cut face of a Roswell Division member pitching life in the cult as repentance to the “alien overlords.” At best it’s annoying, albeit disturbing. At worst, it actually works.

Best described as a peaceful but odd cult, the Division believes the Catastrophe was caused by aliens with a grudge against humanity. Based on half-understood readings about the 1947 Roswell New Mexico “UFO” incident, the cult takes it as a fact that aliens really did crash land on old Earth, and that their human ancestors murdered them. As such, the Division see the Catastrophe as a long-planned act of revenge by an affronted alien race. Their hope however, is that they can somehow harmonize relations with the aliens before another attack.

The Roswell Division believes the quickest way to capture the attention of these elusive aliens is to recreate the circumstances which provoked contact the first time. As such, they have modeled their society strictly on late 1940’s America. They emphasize kindness and community as key values which they hope the aliens will take note of. They harshly shun anyone who does not uphold their standards and norms. The Roswell Division believes that by living the way they do, they are proving to the aliens that humanity is at its base, moral and kind. They believe this will dissuade the aliens from unleashing a second Catastrophe, and may perhaps even move them to help humanity recover from the first one.

The cult was started by a pre-Cat scientist named Robert Lamb, posted at the Jump Gate to study the solar flares of UV Ceti. During a routine scan units before the Catastrophe hit, Lamb picked up what he believed were non-human communication signals within the Mesh. Post-Cat, Lamb became convinced the signal he discovered was the aliens communicating with one another before the attack. Detractors mocked Lamb’s spurious theories but he gained enough adherents that the Roswell Division remains active to this day. 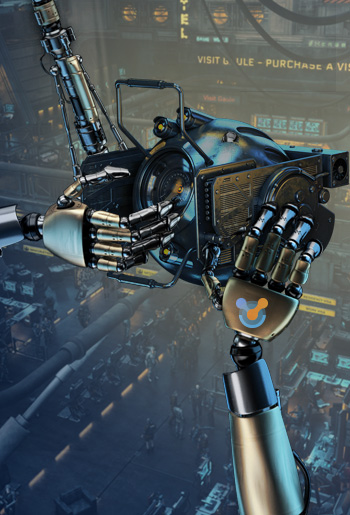 Orwell Stronghold is a 'waystation' of the independent corporate technocracy Benevolent Dynamics. As a haven for the scientific community, it caters to a range of disciplines and houses some of the galaxy’s most brilliant minds.

Its sole focus is the development of many of the technologies rediscovered by Benevolent Dynamics after the Catastrophe and distributed indiscriminately throughout all that remains of humanity. A number of upgrades, for example, to your CORETECHS, were developed on Orwell Stronghold, contributing to its long-standing association with observation and surveillance tech. Huge strides have also been made here in the behavioral understanding of androids and robots.

To a layman the station can seem rather daunting. Flocks of drones buzz overhead while behemothic glittering holo-screens create a dazzling display on many of the station’s walls. Robots and androids are in much larger abundance and even hold positions of responsibility on the station. Every corner here brims with all manner of the latest, and often rather unusual, technologies.

Popular quirks of the station include the Ida Lovelace Lounge where every available surface can be converted into a holo-workspace for that sudden brainstorm or equation that is catalyzed by an alcoholic beverage. In the Employment Center, many workstations utilize Omni-Reality and allow users to log into a pocket virtual space where they can conduct their business in digital privacy. Almost every aspect of this station is dedicated to bringing the gift of science to everyone, and using knowledge to answer the mysteries which follow humanity’s life among the stars. 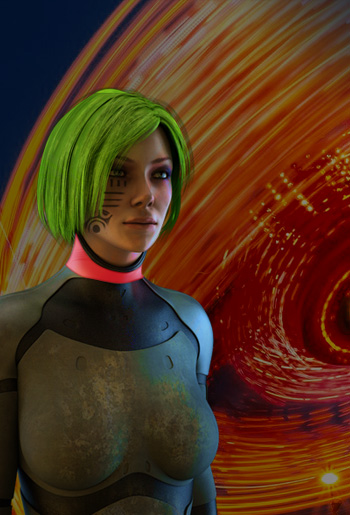 Tianjin’s reinforced external hull, designed to endure the violent flaring of nearby UV Ceti, is an ominous sight for first-time visitors. But today, what’s inside this former science station is even stranger: Tianjin’s often extreme, never-ending and highly lucrative ‘Carnival’, brainchild of the station’s wealthy private owner Etheel Hayes. Participants in this dark festival submit to the whims and wishes of affluent ‘Patrons’, protected by no legal restraint other than a mandatory clone backup. Many find this a weird and disturbing place.

A place once dedicated to the study of solar flaring is now a dark and debaucherous theme park, run as a private enterprise by an unconventional entrepreneur. Before the Catastrophe, Etheel Hayes was an entertainment-mogul, skilled in the exploitation of controversy for marketing purposes. His vast wealth was generated by offering wealthy customers personalized VR experiences, specially created to fulfill their most taboo needs and desires.

But in the tech-phobic aftermath of Catastrophe, Hayes’s empire floundered; until he hit upon a new idea. Having gained insight into the dark core of his clients’ minds previously, he now conceived of a new product: ‘The Carnival’, a non-virtual theme park which offered the same limitless freedoms of his earlier VR projects, but with a twist. Instead of virtual characters, wealthy clients would interact with living, flesh-and-blood participants, doing as they please, so long as all involved are protected with a clone backup.

In 41 AC, Hayes found the site for his venture. He traded his extensive fleet of private ships with the Consortium for an unwanted observatory station in L 726-8 system. A few dozen cycles later, the ‘Carnival’ was up and running with word of its illicit allures spreading like a virus soon after. Although an old man now, Hayes continues to oversee the project personally as Tianjin’s Station Governor.