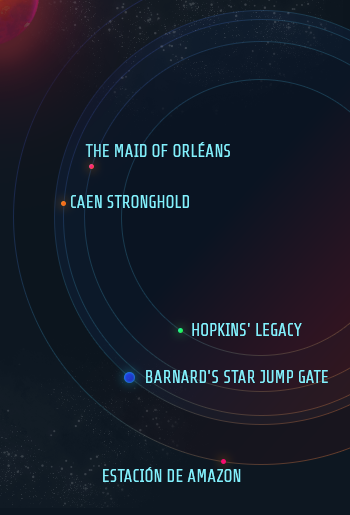 Farther away from Sol, tensions between the various factions that humanity has splintered into post Catastrophe are starting to fray at the tenuous fabric of peace. The Consortium and the Gaule Protectorate orbit each other wearily, in a very literal sense as their respective stations are the two farthest from the dwarf planet, Van de Camp. Between them, the first Freebooter and Independent stations encountered beyond Sol keep a watchful eye, representing the first vestiges of pioneer-like and perhaps slightly more rebellious, independent spirits among the farther flung survivor’s communities. 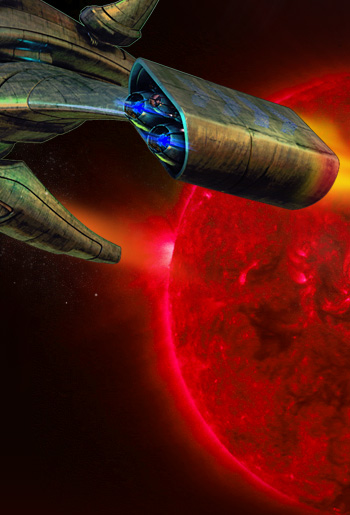 Amid the endless blackness, a giant halo of grinding metal wrestles with the wormhole’s mouth. The jump gate of Barnard’s Star slowly spins, preparing for the passage of the next queueing vessel. Nearby, the Consortium’s Gate Defense Ship keeps a watchful eye, its black form outlined against the red surface of Barnard’s Star behind. Understanding this station’s Cat timeline is vital for present-day Consortium-Gaule relations. The mysterious Bakker Inquest recently sought answers, closing the system’s passage to Sol in the process. With the classified report now complete, single-jump Sol access is finally restored.

Those who survived here rebuilt a station forever cast in Catastrophe’s shadow. Rumor and hearsay spread like a reactor fire as scavengers spoke of a Consortium-Gaule battle. Some accused the Gaule of a bold bid for control of the gate. Others turned their blame to the Freebooters of Caen Station. Fickle narratives sowed doubt and distrust. Post-Cat, little was done to improve system harmony until the Consortium finally launched the Bakker Inquest a few cycles ago.

With the murky timeline of vital import to present-day Consortium-Gaule relations, the political will was quickly found. Bakker started with the single, awkward fact: a Gaule ship, the Mistral, was destroyed shortly after reaching Barnard’s Star jump gate. The passage to Sol, by which it had come, was closed for the inquest’s duration. Cycles of relative isolation followed here, with the indirect route to Sol, via Struve 2398, needing five costly interstellar jumps. After the inquest’s recent conclusion, the jump gate’s Casimir Ring once again offers direct access to Sol. Some on the station remain fearful of the inquest’s classified findings, while others simply celebrate the departure of Bakker and his serious-minded inquisitors. 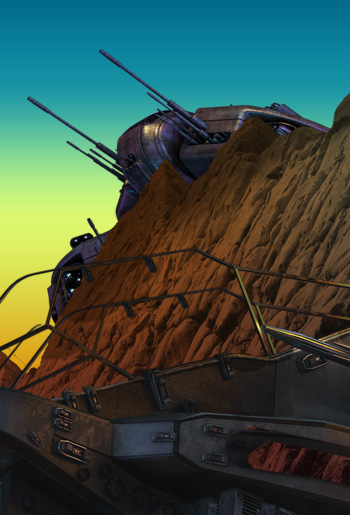 Without any survivors to tell their story, most recently established natives point toward the kilometer-wide radioactive crater in the ruins as an indicator of what befell the station during the Catastrophe. The empty station was colonized by many who were caught between stations on ships and shuttles during the black days of the Catastrophe. With neither Consortium nor Gaule presence heavily featured amongst the traders and private individuals, the station became one of the first Freebooter colonies past Sol. A fact that is adhered to often firmly, seldom politely, and always with the smug encouragement of several dozen large and effective looking armaments salvaged from various cruisers that originally came to rest here. In short, Caen Stronghold is a proud monument to lawlessness and anarchy.

When the first traders and pilots discovered the dark and silent station of Caen Stronghold, it was a truly inhospitable place where a monumental tragedy had clearly recently struck. Life support and power were intermittent and often barely present. Without any other choice, those who had found their way here quickly set about to try to bring the station back to some semblance of functionality.

More than a number of those early engineers and explorers of the dark halls of Caen Stronghold found themselves at the brief mercy of outer space due to the frequent atmospheric decompressions that occurred with regular occurrence. Today, the station is a jury-rigged mess of reclaimed and repurposed salvage and tech from all around the system. Denizens delight in both the messy charm of the home they reclaimed from the dead of space as well as the lack of both legislation and governance, a way of life they protect with deadly force. Atmospheric decompressions occur far less frequently as well! 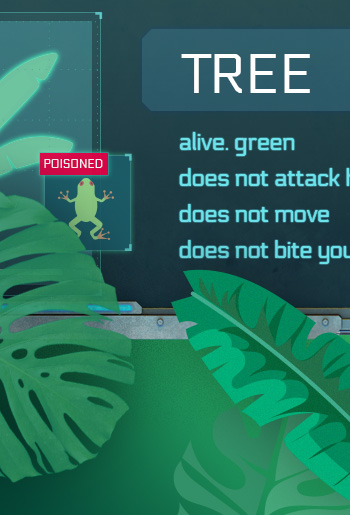 Estación de Amazon is the outer station in Barnard’s Star, lonely in its orbit on the outskirts of the system. This remote station has a secret: a potential solution to the water shortage plaguing what’s left of humanity.

The Gaule Protectorate recently acquired this station peacefully from its former independence. Its position in the far reaches of Barnard’s Star makes it tactically useless, but what’s inside could present something of immeasurable value. Unique in the known galaxy, Estación de Amazon is populated by densely packed rainforest in which it’s possible to grow over a hundred varieties of fruits and vegetables.

More interesting still, it is the only known station in the quadrant that can boast a water cycle of such greatly increased efficiency. The station has real, freshwater rivers and even an elaborate swamp system in the ruins. This almost closed system makes Amazon an incredibly valuable source of research in the hopes of replicating this unique environment. The shock of green and the presence of so much water and even rain is enough to make even the most seasoned spacer gape.

Once a station of lawless fighting between those who survived the Catastrophe, Hopkins' Legacy has been taken over by the Japanese Tanegashima Fleet, and is now the headquarters for Yasutsuna Corp. The station is an odd mix of old, pre-Cat tech and glossy, new, state of the art machinery and equipment brought on-station by Fleet members who've moved aboard. The Lionhearts, a group of native station residents, were only too happy to make room for the newcomers, whose arrival helped hasten the retreat and defeat of the Lionhearts' opposition. Together, the Lionhearts and the Fleet personnel have established law and order on a station which has known only war since the Catastrophe. Those who oppose this new peace have been pushed to the dark corners of the station, far from the lights that now shine on this new prosperity.

The Maid of Orléans

The Maid of Orléans

A Gaule military base that was once a luxury retreat for the rich and famous, The Maid holds a unique position due to several of her warships having survived the Catastrophe. This, combined with her shipyards, has allowed The Maid to be the pre-eminent power in Barnard’s Star. However, the military acted with restraint, recognizing humanity’s precarious position.

The officers on The Maid enforced law and order, but coordinated relief efforts throughout the Barnard’s Star system, earning the grudging admiration of the other stations and a measure of peace in the reconstruction. The Maid is a Gaule station, but it was originally a station named “Amethyst,” constructed by the Consortium almost 800 cycles before The Catastrophe. This would not have been known, but during The Catastrophe, a few Gaule naval ships “running dark” in military drills had escaped the destruction, only to return to The Maid to find most residents dead. Those naval ships held some historical records and after Gate 420.C was reopened between Sol and Barnard’s Star, those records were leaked to the Consortium.

With the re-opening of Gate 420.C between Sol and Barnard’s Star, that peace is coming to an end. The Consortium wants the Amethyst returned but recognizes that, after several centuries, they no longer have a legitimate claim. The Gaule would be hard-pressed to say “no” were it not for the Gaule naval ships already in the system. To add to this, many residents of The Maid of Orléans are unhappy with the strict military discipline imposed by the Gaule and many now advocate for rejoining the Consortium. Thus, a tense stalemate is evolving.