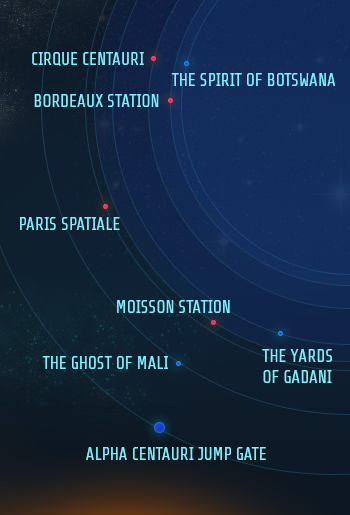 The system closest to Sol, Alpha Centauri represents mankind's first major milestone in colonizing the stars. It is from here too that the race to reestablish colonial territory between the Consortium and Gaule Protectorate after the Catastrophe truly began. The dwarf planet Vercingetorix currently holds a number of operational stations in orbit.

One of the first jump gates built, Alpha Centauri jump gate is also one of the largest structures ever constructed. Impressive as it looks from the outside however, its innards are a puzzle made up of pieces that have long since stopped fitting together. Maintenance crews fight a daily battle to keep the gate from falling apart, and the needs of the station itself are often ignored as the priority to keep the jump gate structurally operational takes precedence. The security cameras, however, are always in top working condition. They scour and scan everything that comes and goes. Although a Consortium owned and governed territory, the Gaule Protectorate commits some resources to the gate’s upkeep as a move to safeguard both their own citizens and their footing with the Nouveau Limoges Accords, the treaty which keeps a delicate peace.

“All animals are equal, but some animals are more equal than others.” Ancient Terran Text

This tenspan, Galactic Destinations brings you to Bordeaux Station, a culture and society with a uniquely colorful recent history, and potentially an explosive future! We interviewed a local historian to get the inside scoop!

Bordeaux is very much a society born of a series of events perpetuated by its reaction to the Catastrophe. Here, the military, for some reason almost in its entirety, blasted off the station to apparently chase after some unseen assailants. They did not return for some time, a long time, in fact.

A coalition government was formed, born of like minded citizens without any particular status or class. Under this people’s ruling body, the station survived and even prospered to a degree. Food was rationed, repairs were organised, and artistic endeavors and activities were organised on a tenspanly basis to facilitate a healthy expression against the uncertainty of those darker times.

A community of artists, poets, dancers began to form, born from the ashes of a time when the Black outside truly was empty. Thus they looked within, instead. Created stories, composed ballads, painted landscapes to provide an escape from the harsh reality while they waited, and hoped that the outside galaxy would return.

And then it did. The military returned in ‘glory,’ announcing that the citizens were safe once again. The coalition government stepped down, the Protectorate placed its high ranking generals and colonels in positions of power to rule and maintain the peace. Curfews, legislation, and various other controls were quickly established to keep citizens happy and productive and the dancers and poets retreated into the shadows.

Rumors speak of poems now growing in anger, in volume, of new stories weaving tales of oppression and retribution, and of ballads singing hymns of revolution.  Whether true or not, through this time, the ruling military classes maintain that hardship is simply necessary for the citizens for the good of everyone, though they do so from opulent offices while eating imported foods and drink.

Anonymous historian and citizen of Bordeaux

“...and to know that things never had been, nor ever could be much better or much worse–hunger, hardship, and disappointment being, so he said, the unalterable law of life.” Same Ancient Terran text 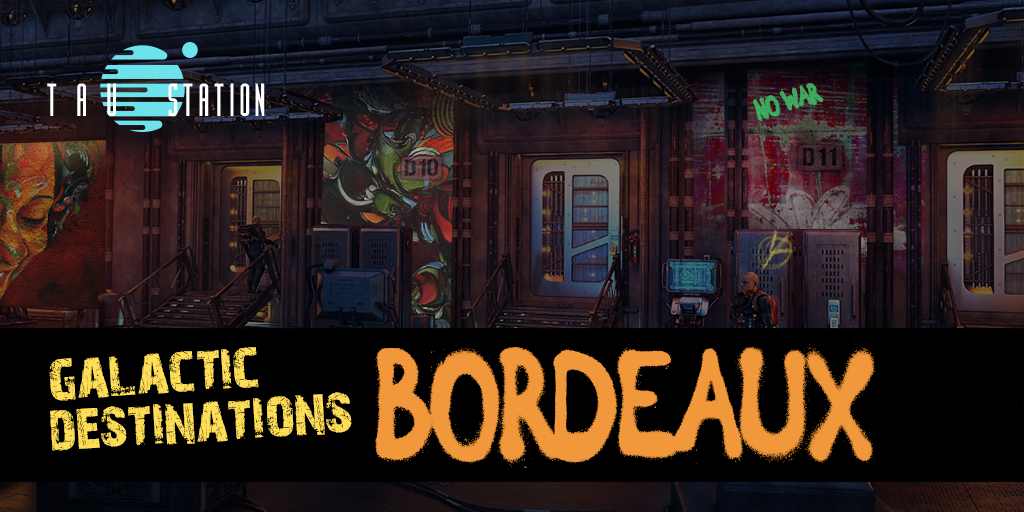 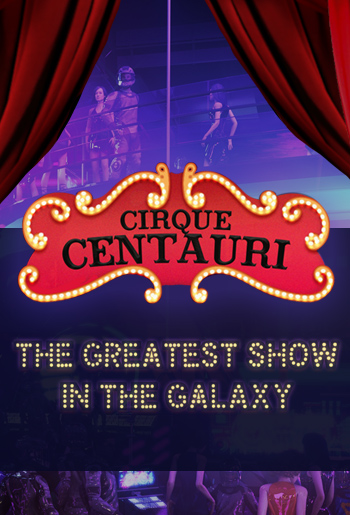 Once a mecca of leisure, hospitality, and entertainment, this station is once again open for business. At one time a thriving station with high-end hotels, galaxy-class restaurants, a spectacular circus, and the finest of recreational activities, the station fell into disrepair after generations of neglect following the Catastrophe. The streets beneath the golden skyscrapers are empty now, the huge, Catastrophe-ravaged buildings being an unstable hazard, in danger of toppling at any moment on those below. Ruins of previously well-groomed neighborhoods, posh hotels, and vibrant offices that were neglected, and in some cases destroyed, are now being slowly reclaimed from the destruction that was caused when the station's power grids overloaded. A big top, with daily shows, has sprung up once more, and luxury hotels have begun to reopen after repairs and new management under the Guild of Hospitality. Originally created to supply the local galaxy-class restaurants with exotic foods, an industry around farming has been revived as the hydroponic labs and hanging vineyards have been slowly reclaimed. Much of the food stays local to be served at fine restaurants or sampled at the Night Market. Some of the treats are shipped off-station and are sold around the galaxy at a great profit. Cirque Centauri is the place to come to find rare fruits and vegetables, wines, beers and spirits, and spices. Albeit, at a great cost.

*Look around when you have got your first mushroom or made your first discovery: they grow in clusters.

Before the Catastrophe, Moissan Station was the true gastronome’s destination. Its endless bays of food printing machines churned out a sea of every imaginable edible delight on a daily basis. A never-ending stream of shuttles transported these delicacies around the galaxy or, more often than not, those with the credits to spend right to the source itself.

The Catastrophe struck with merciless accuracy. On Moissan, the gigantic food processing units fell silent. No matter what effort enacted by the engineer chefs, these behemoths of gastronomic production lay silent and lifeless, refusing to replicate even the smallest, tasteless of morsels.

Very soon, starvation set in. Thousands died during those darkest of cycles, buried in mass graves in the ruins of the once opulent and much visited city center. These makeshift cemeteries, often spanning an entire thoroughfare, would serve as grim reminders of the fallen, and, soon after, as actual salvation for those left behind.

By some combination of the organic and decaying matter beneath and the uniquely nutrient rich atmosphere above, the ruins that housed these mass graves soon began to give life to a plethora of spores, mold, and fungus. This area with the darkest of histories was soon awash in every color and bio-luminescent glow nature could conceive of. Even more miraculous, many of these mycelial blooms were edible! In a tragically poetic turnabout, the remaining population would be saved.

There are those that postulate that this timeline is fraught with inconceivable mistakes, that the molds and mushrooms would not have been able to grow in time to save anyone. These same individuals would have us believe that some clan of cannibals has existed through the cycles on Moissan. But in the vacuum of space, a vacuum of knowledge will often be filled by the biggest and most ludicrous of tales. The simple truth is, we just don’t know exactly what occurred during those dark cycles.

What we do know is that today Moissan has begun to flourish, buoyed by a burgeoning trade in mycelial materials that are useful in everything from ration production to construction. This historic station truly is the epitome of natural balance. From death comes life, from hunger, sustenance, from adversity, triumph! 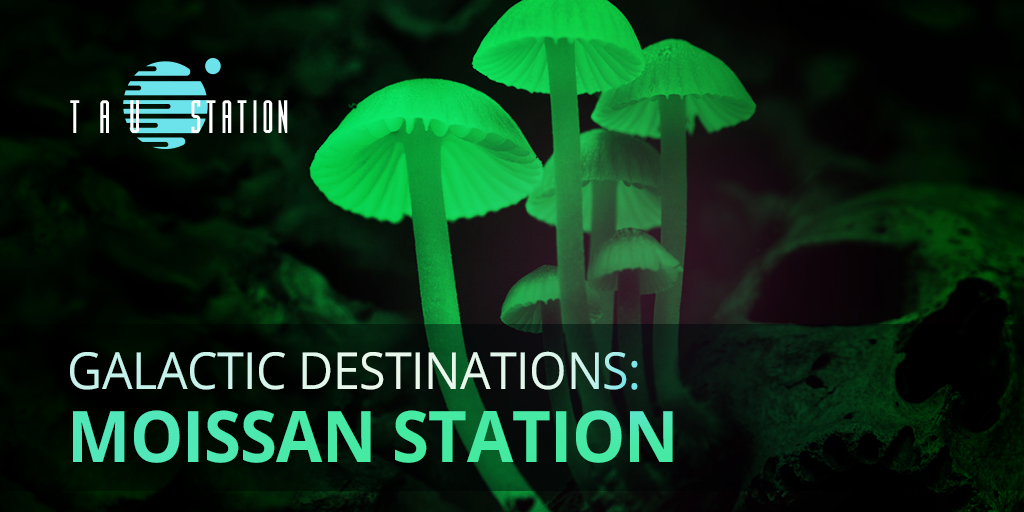 Paris Spatiale is a glorious contrast of past and present, an ever-present reminder of how even the mightiest can fall from grace. Once the very pinnacle of culture and engineering, the station is now characterized by colossal, empty skyscrapers and ruined museums. Fractured sculptures of heroes and beasts of legend cast ominous shadows in the perpetual twilight of a damaged fusion core. But there is also hope here. With the fragments of its former glory strewn around the station, one is reminded of the station as it once was, and as it could become again. 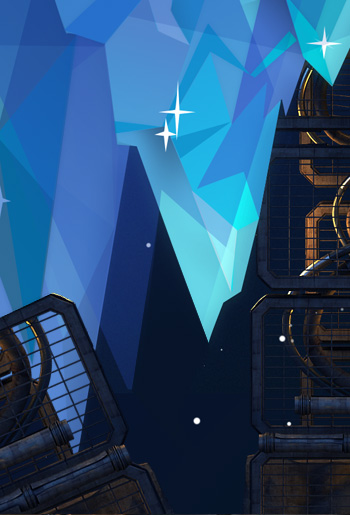 Well off due to its water purification facilities, the Spirit of Botswana is held up as an example of recovery from the Catastrophe. From this station, Aquatic Resources Corp manages the largest ice mining and water purification operations in the galaxy.

One of the largest stations ever built, Botswana is where mined ice is brought for purification, bottling, and shipment. Every person who lives on or near a space station is dependent on the bounty that the miners of Aquatic Resources Corp (ARC) haul back from the asteroid belt. The Shipping Bay of Spirit of Botswana is always busy with the coming and going of ships, both large and small, and their precious cargo. 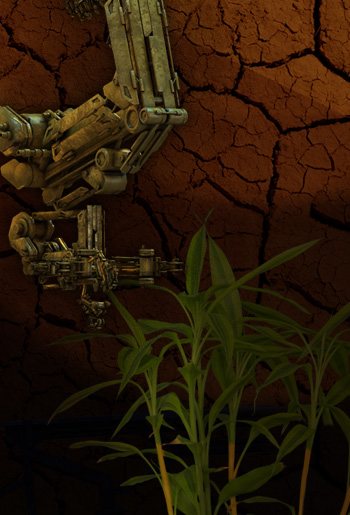 The Ghost of Mali

Filled with tracts of artificial farmland, Ghost of Mali had few cities when the Catastrophe hit. Even so, the destruction wrought by that day rocked the survivors to their core. After seeing the failure of the machines they’d depended on, they sought a new path. Eschewing technology wherever possible, they turned instead to tools powered by hand and sweat. Indentured servants scaling massive, genetically engineered plants are a common sight, and visitors often stop by the fields to watch as people dangle from the limbs to harvest the crops. 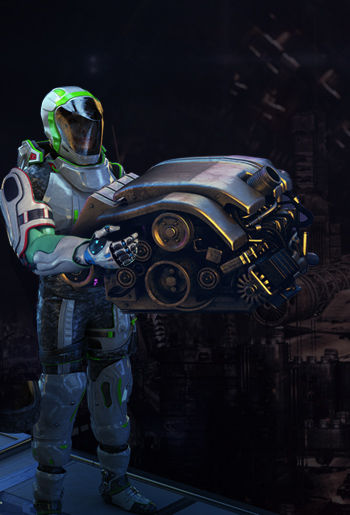 The Yards of Gadani station is known for two things: its ship breaking yard, and its reduced gravity. During the Catastrophe, a freighter slated for decommissioning exploded with enough force to slow the station’s rotation, causing untold death and destruction as buildings shifted, collided, and collapsed around the hapless citizens. In the time since, its residents have gradually adapted to life with less gravity and it has become home to many Belters; those long-limbed individuals who have adapted over the centuries to lower gravity environments. After the Catastrophe, Belters from all over rushed to this station, enchanted with the idea of having a home that wasn't their ship where they could really stretch their legs properly. The ship breaking yards of Gadani also attract a regular stream of visitors, some looking for parts with which to repair their starships, while others come seeking to purchase a new (to them) ship from the shipyards.

There is a saying: “Ships come to life on København, and come to die on Gadani.” Yards of Gadani is a massive station, built to be able to swallow up broken and disabled ships and spit out their bones. Workers toil in dangerous conditions on the yards, both within and on the outside of the station's asteroid. They swarm like ants over enormous retired ships, stripping them down and turning them into scrap. Hulls of ships rise up many stories, their exposed metal girders like fleshless skeletons. The decreased gravity makes the hard work both easier and more dangerous.