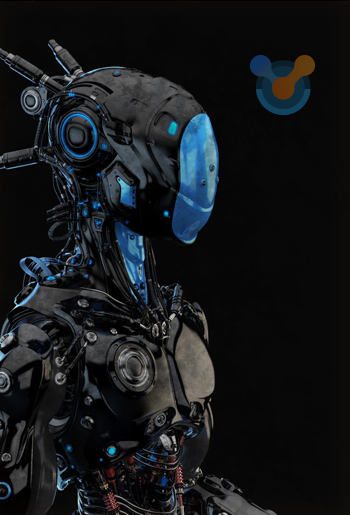 Humanity finds itself in a position unique in its history. We, for the first time in our civilization’s life span, possess technology at our disposal that we no longer know how to craft. The knowledge of a number of technologies and systems that we utilize, the secrets behind their inner workings and prototype designs have been lost after the events of the Catastrophe. In essence, we have the technology; we cannot rebuild it.

With survival having been the forefront of our collective priority for the last hundred cycles or so, getting something to work was far more important than figuring out why it works. As such, a number of fundamental processes and systems that are firmly ingrained into our society have to be accepted on an ad hoc basis without a deeper understanding of their inner workings. Today, with humanity finally being able to take a small, albeit brief, breath, a number of organizations have begun to make some headway into reclaiming some of this understanding. It remains, however, a fascinating position we find ourselves. We are, in essence, attempting to retro-engineer our technological evolution.

All humans have been found to possess an inbuilt genetic modification that allows for the generation of an amygchip within their frontal cortex. The construction of the amygchip is not well-understood; however, its behavior is.

When a clone is first purchased, a reference scan of the brain is performed and the data stored at a clonevat facility. This data is encrypted with a cryptographic system known as the "Obi homomorphic lattice", or "Obi lattice" for short. Little is known about it other than an African mathematician developed a lattice cryptographic system which is theoretically unbreakable except by brute force, even with quantum computers.

After the reference scan, the amygchip is constantly broadcasting to the "Mesh", a Galactic wide mesh network that runs through jump gates. Periodically the amygchip broadcasts an encrypted keyframe and constantly streams encrypted diffs of said frame until the next keyframe broadcast. This stream is distributed to all clones matching the amygchip signature.

When a person with an amygchip dies, a "dead man's switch" is triggered causing their latest clone to be decanted. If that clone is in another star system, there may be a significant delay in decanting. 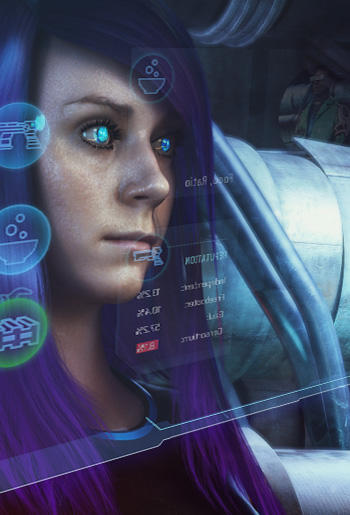 The word CORETECHS stands for COgnitive Recall Enhancer TECHnology Stack. It is a personal computing interface placed behind the retinae of your eye and developed by Benevolent Dynamics.

The neural interface of the CORETECHS allows users to see and manipulate an augmented digital view of the world around them, projected into their field of view. This includes such aspects as voice comms and access to the mesh, personal bank accounts, and the digital market. The CORETECHS also provides personal storage and inventory, ship systems, and social networking.

In a time of darkness and strife, the CORETECHS is a testament to humanity’s ingenuity and nobility. It’s a tiny window of light, shining out of our eyes, by which we can connect to each other in the dark. It is available to everyone at no cost, irrespective of position or affiliation. 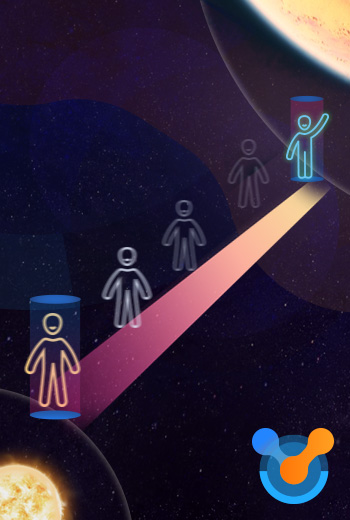 The galaxy is truly a vast, mind-bogglingly large place to live, these days more than most! Humanity’s stations orbit planets, that in turn orbit stars. Solar systems dance in a complicated rumba around the galaxy and we strive to travel throughout it all! Benevolent Dynamics, through the new, old, and proudly reclaimed science of Quantum Telepheresis is extraordinarily pleased to announce that we have just brought all of that so much closer together!

Accept this broadcast to learn more. Disclaimer – please note the broadcast includes sensory input. Please ensure your surroundings are safe and you are not operating heavy machinery during the presentation.

The background hustle and bustle of the station fades away as your CORETECHS gently pulls a visual and auditory blanket over your senses. A gently spinning galaxy washes over your field of view, replacing the travelers rushing through the port of København. Shouted greetings and station broadcasts are softly muted as a soothing voice begins to speak in dulcet tones.

Space, one of our seemingly final frontiers. For cycles we thought it an almost insurmountable obstacle, limited by the capacity of the engines we could salvage and our own timespans. Benevolent Dynamics however, ever striving to bring you miracles of science and technology, have taken a rather significant chunk out of this challenge!

The gently spinning galaxy grows as your field of view smoothly hurls you hurtling closer towards its stars. You fall towards a system and then slowly come to a stop, gazing at the stations orbiting the red planet of Mars in an endless celestial waltz. A single phrase, written in starlight, appears to explode out of the nearby sun and glistens for a moment above the solar system.

Quantum Telepheresis is the ancient science from Before of transporting matter instantaneously through space via entanglement on a molecular level. Our scientists have spent the last several cycles reclaiming this old technology and now, soon, will make it available to all citizens of humanity for a modest fee of bonds!

Your field of view zooms in even further down onto København, the very station you yourself are standing on. You swoop through the metallic corridors, flying past hundreds of stick figures representing the denizens and travelers of the station, and stop in a room by the port. There, a smiling stick figure waves at you and steps into a strange looking contraption. The figure stands in the strange, chrome colored tube for a moment before dissolving into what appear to be tiny 8-bit cubes that slowly fade away. You note that the last thing to dissolve is its happy smile.

Suddenly, you are thrust upwards and out of the station, shot through space only to arrive on a different station and a different port. The smiling, waving stick figure is there, in a similar chrome colored tube. It steps out and walks away to continue doing whatever stick figures do with their day.

We are happy to report that at time of broadcast 90% of all test subjects have arrived at their destinations almost entirely intact! Please note that due to several factors including governmental legislations and resource restrictions, only organic matter and personal possessions may be Telepherised. Additionally, travel is restricted, for the moment, between stations of the same system.

We are very excited to soon bring you this latest, reclaimed development from Before! The galaxy shall grow smaller and become vastly more accessible! One telepherised step at a time, we shall reclaim all our homes among the stars!

Part of Benevolent Dynamics’ raison d’être, as it were, is the rediscovery and reclamation of lost knowledge towards its utility in our everyday lives. The end goal, of course, being the hopeful rekindling of humanity’s extropic flame lighting our way once more throughout the galaxy.

One of the more interesting technological mysteries currently under our scrutiny is that of simulated sentience. Androids, gynoids, and the gender neutral xynoids, while not entirely uncommon in and around the various stations we currently inhabit, function in certain ways that are, as of yet, still not fully grasped. As such, the ‘population’ of these more complex systems are finite. We have the knowledge to activate them, to (more often than not, with their own help) repair certain superficial issues and the like, but to fully program the software behind their behavior is something we are still striving to understand.

To date, we have gleaned certain parameters that lie at the surface of an android, gynoid, or xynoid's operational matrix. These rules correlate with certain ancient texts that originated from Earth and govern the behavior of these systems.

While an almost infinite matrix of processes surely govern many behavioral patterns of an android, gynoid, or xynoid's ‘character’, the above four serve as the prime directives of these systems. It is therefore inconceivable for a given unit to be dangerous to a human in any way. Whilst many do experience a certain unease when faced with individuals of programmatic intelligence, it is merely an emotional response and not one born of logic or fact.

While both androids gynoids and xynoids, and robots display and utilize an extent of programmatic cognizance, they do so in vastly different capacities. Both are able to function with a certain amount of autonomy within a given set of parameters. However, the former display more nuance and depth in both interaction and problem solving.

It is important to note that however much an android, gynoid, or xynoid may ‘seem’ to possess a rudimentary personality, this is not the case. Software provides rules and guidance that govern the way the unit will respond to different circumstances. A certain amount of ‘learning’ or complex problem-solving and adaptation have also been observed in them and, to a much lesser extent, robots. Again, however, this is no more than a very well-written program system.

There may also be something to the visual distinctions between the two types of system that may have had some bearing in their initial design. Our predecessors from the Before, for some reason that only they knew, chose to make androids, gynoids, and xynoids resemble humans to a certain extent. They can be identified by their all-white glowing eyes and artificial skin pigmentation. The ‘flesh’ of a unit is comprised of a quasi-organic polymer plastic that houses the various fluids required for both internal lubrication as well as cooling.

In contrast to this, robots do not deviate from their mechanical origin in appearance. They do, however, have a larger diversity in look and function. From the small, cylindrical units that keep stations clean to the bipedal service bots that do everything from tend bar to data entry in certain embassies, all robots look like machines.

Like androids, gynoids, or xynoids, robots have speech functionality in order to best communicate and facilitate the needs of those around them. Unlike the former group however, a robot’s speech pattern is more finite and less nuanced, more a series of permutations in as far as programmed responses.

While perhaps not the most imperative aspects of the Before that we seek to reclaim, androids gynoids and xynoids, and robots do, perhaps, represent a facet that is most ingrained in our current society. This in itself presents a fascinating conundrum; walking among us, advising us and performing all manner of our tasks are machines that, technically, we do not fully understand how to craft or operate. While the rules that govern them ensure that they can never ever cause us harm, it is nevertheless an interesting reflection upon our post-catastrophe culture. 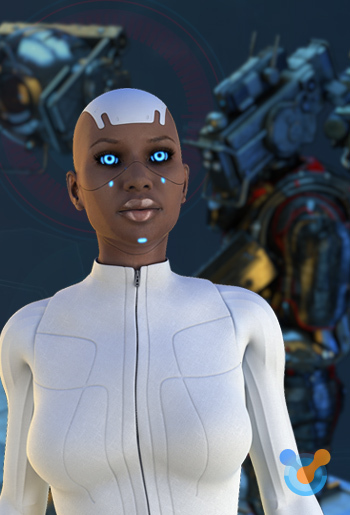 The mesh is a vast, intergalactic digital network that acts as a repository for data, method of communication, and hub of a number of crucial digital services. Servers link through jump gates and allow the datastream to flow through the wormholes that link the various hubs together (as well as allowing for interstellar travel).

Your CORETECHS is linked directly into the Mesh and allows for an infinite number of tasks to be performed remotely and with relative ease. This includes the storing and transferring of your amygchip data between clones.