Life among the stars isn’t easy for those living in the shadow of the Catastrophe. Humanity’s once-formidable presence in the “Big Black” now comprises clusters of confused outposts and the remnants of fallen empires. Often, the only shared value is the hope of making it through another day.

For those who travel far and wide in this varied starscape, the challenge is even greater. Knowing where your next ration is coming from or having the right documents for your journey can make all the difference. 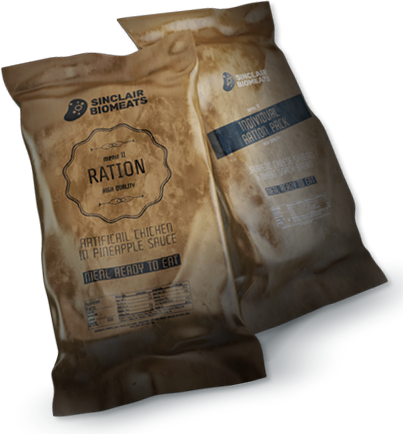 In the wake of the Catastrophe, avoiding starvation became a complex technical and organizational challenge. On some stations, extreme food scarcity prompted brief bouts of cannibalization. Elsewhere, thirst and water-borne disease claimed their own share of victims. What passed for government in the Catastrophe’s chaotic aftermath set about remedying the situation. With the aid of some fledgling corporations, post-Catastrophe authorities devised new nutrition systems to meet the needs of surviving populations.

Today, all citizens are entitled to a daily ration pack which can be collected from a station’s Government Center, tiered for each person’s level of physical need. Despite the restricted entitlement, it’s not unusual for some citizens to secure additional rations with a bribe. Rations refresh a citizen’s health and well-fed citizens will notice faster recovery from injury and fatigue. They might not taste good, but they will keep you alive. At least until tomorrow.

Thanks to these well-run supply systems, populations no longer dread starvation like they once did. Food riots and related crime are rare. But diligent administrators take nothing for granted, regularly testing contingency plans for a range of shortage scenarios. It’s only a slight exaggeration to say that rations are the best peacemakers of all. 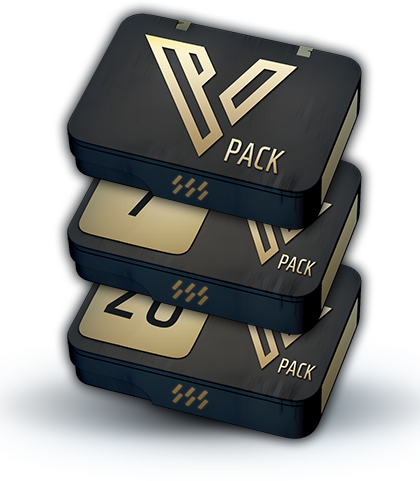 These highly prized packages of "Vaccaro-Ibrahim Particles" provide huge boosts to the body's repair mechanisms. The origin of the name is unknown, but refers to nanite particles of varying half-lives which, when injected into the body, stimulate neural and physical repair.

Production of VIP packs is handled by Hemingway’s Hyperdashery, a corporation with a savvy high-end retail strategy and an innovative product line, aimed at affluent travelers. Despite the efforts of many, no wannabe copycat has yet managed to crack the Hyperdashery’s VIP recipe and produce a competing counterfeit product.

VIP packs are tiered according to users’ physical needs, and also vary in terms of their effect duration. As both Consortium and Gaule governments tax VIP sales, they offer additional administrative privileges for VIP users. For example, government centers will store up to 30 days’ worth of uncollected rations for bulk pick-up, and also offer visa purchases in-house, saving VIP pack users the trouble of visiting a station with an Embassy. 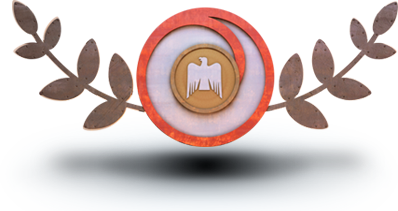 As stipulated by the Nouveau Limoges Accords of 92 AC, Gaule and Consortium citizens can travel freely between stations of differing affiliations on condition that they possess a valid visa, purchased either from an Embassy or, for VIP users, a Government Center. Upon expiry, visas must be renewed.

Both great powers are open about the fact the current visa system is there for surveillance. Though rarely touted in public, mistrust persists between the two political entities and, consequently, trade and travel can only occur with the aid of strict monitoring. While the Catastrophe remains poorly understood, the situation is unlikely to change.

As a result, authorities on both sides have little time for excuses. Consortium citizens who find themselves on a Gaule station without a valid visa, and vice-versa, will experience swift deportation. Responsible travelers shouldn’t neglect their documentation! 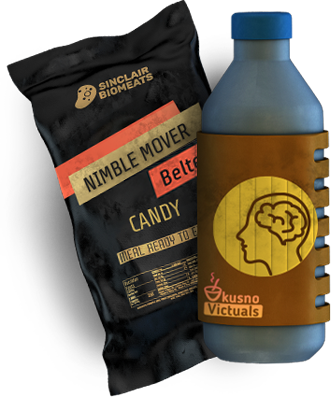 Individuals of specific genotypes will find that consuming such targeted flavors will enhance their genetically given advantages, and occasionally negate their nucleicly-bestowed disadvantages. These 'wonder foods' come straight from the 3D printers of the hardworking, inventive, and highly profit-driven folk at Sinclair Biomeats and Vkusno Victuals.

According to scientists, CORETECHS biometrics show those enjoying a genotype-matched snack see a temporary increase of 15% when engaged in activities that use their primary biometric stat. For activities using their secondary stat, drink products will provide a temporary boost of 7%, while vitamin pills can, for a time, ensure 0% training loss from their weakest statistic. These numbers are based on CORETECHS data gathered from almost entirely willing test subjects.

Baseline individuals are also able to benefit from the full range of products. Biometrics show they enjoy 50% of the benefits of any of the genotypically targeted delicacies.

In the cycles that followed the Catastrophe, it took every ounce of tenacity, ingenuity, and no small degree of luck for humanity to drag itself, tooth and nail, out of the debris-filled avalanche of potential oblivion. Always scrappy as a species, we somehow managed to pull ourselves, gasping for collective air inexorably upwards, grasping at every chance for survival. Along the way, a number of principles from Before managed to cling onto us for the climb out of this metaphorical pit.

Capitalism, ever our most tenacious trait, was one such survivor. It has since born a number of systems that have helped us try to thrive in an otherwise untenable situation. In today’s future, the concept of Free Enterprise allows us to boldly go where we might otherwise have been wholly unable to. Engage with us below and we shall go into a little more detail.

Food, water, and air were among the first elements of life we needed to scavenge for through the rubble of our former homes. Without these, as was very often the case during the first, dark cycles following the Catastrophe, there was only death. Very soon after the need for protection quickly arose, we started scavenging for anything that we could fashion into a weapon to protect what nourishment we could find. Those first cycles were often violent and bloody. If you found food or water, you could be sure that others would want it, need it.

As we scavenged, we discovered something new, whilst also very old. We discovered the digital presence of credits and bonds saturating much of everything from Before. Suddenly we had a potential substitute to the violence, or at least, to a certain extent. Many prefer to simply take even this currency that others use for trade, by force as well.

At the same time, the Consortium and the Gaule Protectorate were moving slowly through the systems, reinstalling the foundations for order and law, and bringing a semblance of organization and establishment back into our lives.

There was, inevitably, strife and tension between the governments but also a need for stability. They worked with the survivors to help humanity adapt to its new predicaments. Plans and processes were put into place to attempt to revitalize the fledgling economy and allow individual survivors the chance to survive, even thrive. Thus, the concept of Free Enterprise was born anew.

Today, legislation states that any scavenge is considered a legitimate trade and all individuals legal traders. With the digital ingenuity offered by the CORETECHS, anyone may set up a storefront, whether digital, physical, or both. Some will set up stalls, allowing you to physically peruse their goods, while others allow you to view a virtual store wherever they are and deliver any items on the spot via drone.

Within cycles, a burgeoning and dynamic economy began to form. Supply and demand across systems and even between stations meant more travel and more trade. A commodity or piece of gear common and cheap on one station, may be highly sought after and expensive on another. Likewise, some vendors struck deals with the powerful corporations, selling their wares in their name across the galaxy, others ply what goods they scavenge. Looting the dead, however recently deceased, is technically scavenging. This, perhaps inevitably, has led to a certain ethical quandary when it comes to the gray area of how an object of scavenge may have met their end and subsequent looting thereof.

Yet others have branched out, specializing in different areas or even to specific genotypes. Offering goods and consumables for their specific type of physiology or cultural disposition. Individuals and even entire syndicates now are able to ply their wares on any station they feel most economically inclined to their particular goods at a given time.

On any station, across any number of systems, travelers will always be able to both find opportunities to buy and sell any number of scavenged, pillaged, or crafted goods that may benefit them directly, or be highly sought after in another part of the galaxy. In this way, Free Enterprise is a small, but perhaps vital aspect that helps to breathe life back into what remains of humanity.