In a galaxy where survival is far from a guarantee and more of the bonus at the end of the day, ‘on the fly’ medical care became somewhat of a necessity. The stimpack is post Catastrophe healthcare’s answer to the current clime. Utilizing a cocktail of nanotechnology and various different chemical mixtures, depending on the nature of the particular dose, stimpacks provide an almost instantaneous boost or relief in the field when proper medical care is unavailable.

Due to lack of clear standards in the naming of the stims, the names were somewhat arbitrary and led to many medical professionals being confused as to which stim to offer for a given condition. To deal with this issue, an inter-governmental agreement between the Consortium and the Gaule Protectorate developed an interstellar standard for naming of stims to reduce confusion amongst medical professionals and consumers. The name is comprised of four parts:

With this naming scheme, a competent medic can quickly select an appropriate medical stim for the condition at hand. All relevant information is encoded in the name of the stim, though some might find it easier to read the stim details.

Stims, for the most part, are available for private and military use. Certain black market varieties have begun to surface but these are heavily cautioned against as no measure of quality or safety can be guaranteed. 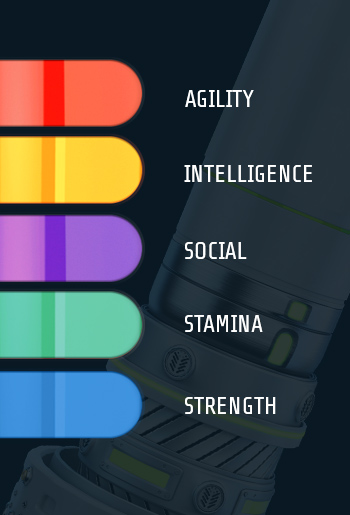 The three letter code that begins the stim name indicates the type. The codes are as follows:

The stim variant is the hardest part of the name to understand and it's one that well-trained medical professionals focus on. Each stat is given a number and, when added together, the make a unique "variant" for that sime.

Thus, a "variant" of V25 must be a civilian stim boosting strength, social, and intelligence, as that is the only combination of values adding to 25.

Each stat has its benefit listed here, from strength to intelligence (in the order listed above), with toxicity as the final number. If the same value is seen multiple times, it's indicated with an x followed by the number of times the stat was seen. Thus, for Civ T04-V009-10.05x2-0.05, we know that: