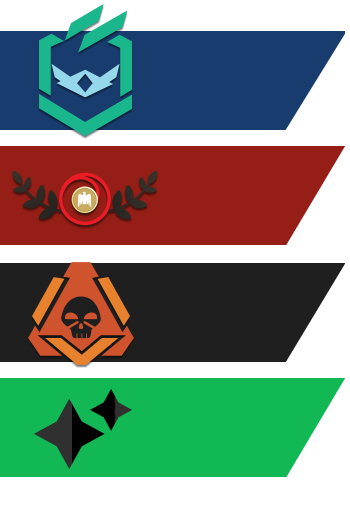 Humanity’s post-Catastrophe political entities are divided into four camps. Two major powers, Consortium and Gaule, control the majority of stations. The rest split between the anarchic Freebooters and a range of diverse and unique Independents.

Diplomatic relations can be complex and vary according to local conditions. The major powers are locked in something of a cold war, but also cooperate mutually on some issues. Freebooters spread anarchic instability and Independents strive to forge their own destinies amid the often unwelcome courtships of imperial blue and red.

Every system is, to a degree, unique. Where Freebooter menace lurks, Consortium and Gaule are often seen to share closer ties. Where both eye an unconverted Independent neighbor, the opposite might be true. Like stations, individual citizens also possess affiliations which confer rights, privileges, and sometimes, duties and obligations. 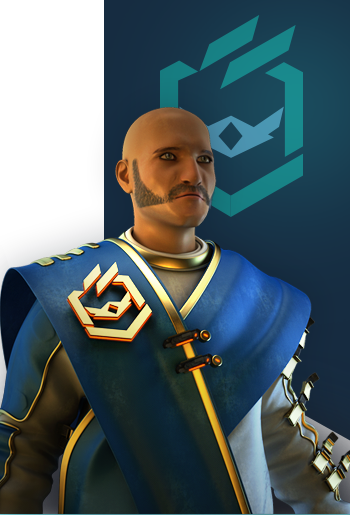 The Catastrophe was a time of chaos and darkness; we, as a species, were floundering and struggling to survive. A number of factions rose up out of the ashes of humanity to guide and steer the remnants of our civilization to safety. Today we’d like to introduce you to the Consortium!

With our civilization teetering on a precipice, the Consortium had the resources and influence to provide us with a bastion during catastrophically troubled times. Of course, any powerful organization that rules will be met by some sort of opposition. There are those who would accuse the Consortium of many unsavory practices while others argue that these are just disgruntled dissidents and that it provides safety and stability in a time of turmoil.

Generally speaking, its citizens perceive a sense of individual liberty, ownership of businesses, education and health, and subsidized welfare programs, but taxation is high and complex bureaucracy very much the norm. While military service is not currently compulsory, joining the service is associated with good citizenship and accords its members with unique social and economic privileges.

Some say that there is, perhaps beneath the shining symbol of stability, a dangerous veneer of control and, indeed, the Consortium has been called expansionist as it has often been quite ruthless when opposed. On the other hand, individual stations are ruled by appointed governors (civilian and military) who tend to have a free hand in how they govern as long as they meet the government’s requirements for trade, support, and defense. While petty corruption by elected or appointed officials is usually tolerated, treasonable activities and gross misconduct are punishable by death. The Consortium has a first-class surveillance and security department to keep their citizens safe. There are those that would add propaganda and strong-arm tactics to this list as well, though who knows if these types of political malcontents can be trusted?

In the aftermath of the Catastrophe, the Consortium seems to have two imperatives: reestablishing control over all systems and preventing another Catastrophe. Though they are currently working with the Gaule Protectorate to rebuild, their relationship is one of convenience, and a very definite “cold war” could be said to exist between the two affiliations. 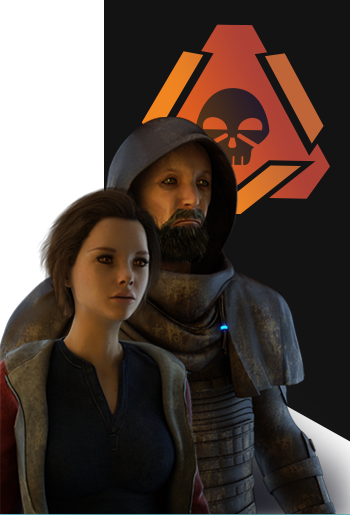 “Oh, better far to live and die Under the brave black flag I fly, Than play a sanctimonious part, With a pirate head and a pirate heart.” ~ Ancient Terran Freebooter manifesto

Since the Catastrophe, the Consortium and the Gaule Protectorate have each been doing what they can to bring stations, left out in the cold by the destructive forces unleashed during those dark days, back into the fold. There are, however, those who show zero desire to be brought back, embracing instead the wild and unpredictable nature of life on the fringes of known space. Allow us to introduce the Freebooters.

In the far reaches of chartered space lie stations that seemed to thrive on the initial radio silence that followed the Catastrophe. Many of these stations were forced to get by without the help of the established governments, embracing instead a very necessary ‘survival of the fittest’ type philosophy in order to endure. The resulting cultures that formed over time are now deemed too wild and uncontrollable an entity for either the Gaule or the Consortium to consider bringing under their yokes.

Stations that have adopted the ‘Freebooter’ status as their affiliation prefer to survive the rigors of space on their own terms, and enforce what laws may be necessary (if at all) through violence and harsh consequences more often than not.

Most Freebooter stations lie in the fringes of colonized space. One notable exception to this is the station known as Caen Stronghold that resides within the Bernard’s Star system. While Caen Stronghold is relatively closer to the central occupied regions, at least in comparison to many other Freebooter stations, it still politely and firmly maintains its less than lawful affiliation. It does so somewhat smugly by way of various powerful armaments that had been salvaged from a number of battle cruisers during early settlement and subsequently retrofitted directly onto the external housing of the station itself. These armaments serve quite effectively as the intergalactic version of a ‘No Cold Callers’ sign.

It should be noted that Freebooters are not wholly unapproachable. On the contrary, since a more widespread contact has been established, Freebooters have been known to trade with others on a regular basis. The only stipulation is that they not sense any weakness in their dealings. Any perceived lack of strength will often translate to them simply taking anything they decide does not need to be paid for. It should also be noted that Freebooters often have a very loose definition of what constitutes ‘weakness’…

“I’ve had my fair share of dealings with the Freebooters. They’re not all bad, some of them even have hearts of gold. Though in all likelihood, they probably stole those from someone else.” Maya Von Christova – Benevolent Dynamics 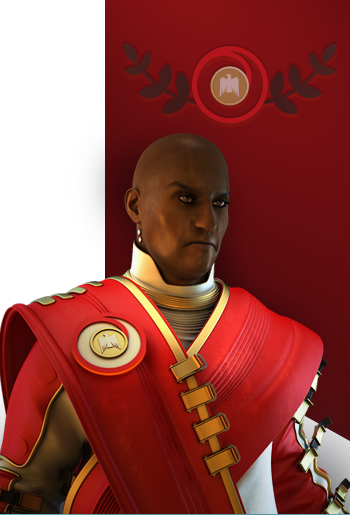 Prior to the Catastrophe, the Gaule were a Federated Republic based on traditional and historic democratic principles born out of the ashes of a failed European Union on Earth. The Catastrophe and its devastating aftermath significantly altered the Gaule’s form of government (out of necessity, argued the survivors). Officially, the Gaule saw the Catastrophe as a deliberate attack by some unknown source or entity. Some within the government, however, feared collusion by the Consortium. It should be noted that within the Consortium, a similar suspicion regarding the Gaule was being considered.

In light of the crisis, the Gaule Protectorate (honoring an ancient European tradition) elected a “First Consul of the Protectorate” to lead the government. This position of First Consul, historically adopted in times of war or other emergencies, and usually given to a person of high military rank and/or distinguished service, was given absolute control of the government and military. This temporary dictatorship was supposed to be relinquished after the crisis had passed. To date, the First Consul of the Protectorate, Simone Beauharnais, remains the leader of the Gaule Protectorate.

In the duration, the Gaule have become a highly militarized society, despite its deep roots in republicanism, liberal citizenship, human rights, and social reform. The people of the Gaule Protectorate, after centuries of struggle against the Consortium, are willing to sacrifice individual liberty (temporarily) for the security of maintaining their identity as a sovereign state. Military service of 21 cycles is compulsory for females and males 65 – 146 cycles old and is required for full citizenship.

In this regard, the Gaule are considered to have the most advanced military services in the known systems. This military might, for now, is the shield and sword that keeps the much larger and economically stronger Consortium at bay.

Though Gaule suspicions about the cause of the Catastrophe were never completely quashed, both sides agreed to broker a tenuous detente. Diplomats took over. A treaty was later signed by representatives of both affiliations at Nouveau Limoges in the Sol System. This treaty is known as the Nouveau Limoges Accords, which outlined terms for expansionism, technical cooperation, claims to stations, and trade.

Under the Accords, the Gaule Protectorate and Consortium agreed to combine their efforts in producing and repairing ships, exploring the galaxy, redoubling the effort in recovering surviving stations, and answering the great question of what caused the Catastrophe—and how to prevent another. Despite the Accords, a deep distrust continues to exist between both powers, leading to an ever expanding cold war. 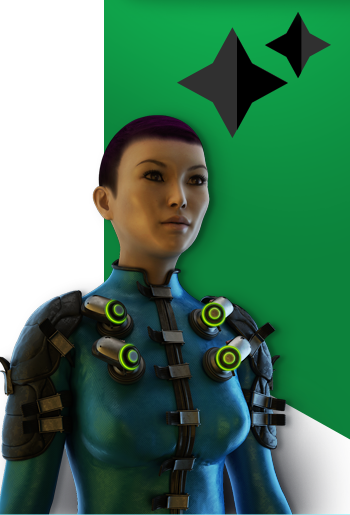 A number of stations remain independently governed to this day. Some are run by corporate interests, whose non-affiliation is economically advantageous. Others hold onto the local, less formal, governance which saw them through the Catastrophe’s aftermath and has served them since. Some, due to their relative isolation from the norms of the major powers, will appear downright bizarre to visitors.

Diplomatic relations between Independents and their neighbors vary drastically, but few welcome the courtship of the major powers. The Consortium prefer ‘soft power’ strategies, aimed at creating public support for accepting the blue affiliation. The Gaule, though less likely to convert an independent, are also more heavy-handed when they do, especially in assimilating local populations to Gaule citizenship demands.

Not all Independent people are friendly to one another, but most share a commitment to the cause of perceived freedom and liberty from the overarching yet distant central system of control that the larger powers offer. Many cooperate at least loosely with one another, recognizing a shared self-interest in keeping blue and red at arm’s length.