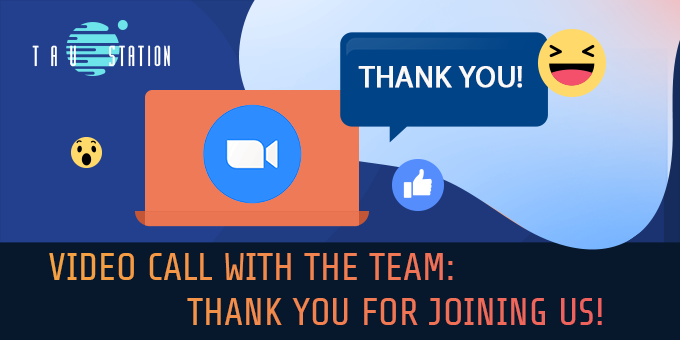 On the 7th of April, we invited the Community to a special video call with the team to learn more about development plans for Tau Station and to have an open discussion about how you perceive the game now that we published the desktop version 1.0.

The call began on Thursday, at 18:00 UTC. Despite it being quite early for some and late for others, a good group of people nevertheless participated in this first chat with the Community in 2022!

After the introduction of the team, Leila shared insights about the current objective, vision, and next steps for the game’s development.

Currently, the focus of the team is on finishing the new visual approach that we recently pushed for the desktop version. The goal of showing it to you even before everything was 100% done was to get your feedback which helps us to finalize it now. Once the desktop version is done, we’ll work on the tablet and mobile implementation. The tablet version will be similar to the desktop, but a bit lighter. All this is set to happen within the next 6 months.

“One Page, one Action”

A major ongoing task is the migration of the game into a one-page application and reducing the complexity of the various areas of the game. Several areas offered sometimes too many options and therefore it was too overwhelming, especially for new players. “One page, one action” is the direction for making it smoother.

The next update & Cockpit

The very next update on the 12th of April will bring improvements for the University page and the message system. Afterwards, the cockpit of private ships will be improved as well.

The meeting participants had the opportunity to get a sneak peek of a very early (work in progress) layout for the new cockpit. Just to share one of the many ideas mentioned: we want you being able to enter your private ships even when not traveling.

We’re going to open a new system soon as well. Once we have all the big UI changes done and the one-page application changes are in place, we will add more fantastic music for Tau Station, music for the mission and sound design that has been composed, waiting to be enrich the game. On top of that, we plan to add more visual effects as well, plenty coming…

Leila underlined that more multiplayer gameplay is on the roadmap. Curtis highlighted a big feature: “Syndicate buildings”. Syndicates will have the ability to have their own barracks or Sick Bays that can be built in the Ruins.

In the future, the gravity will differ per station with an impact on combat, e.g. We’re also speccing out some exciting feature details for ice mining.

Al referred to the narrative work: There is a big chunk of narrative review going on with new directions in the missions to play and test. The team is looking forward to adding these improvements to the galaxy. We’re also having a lot of fun writing an intriguing and hopefully engaging core story!

During the open discussion, everyone was able to ask questions and share their feedback. Here are some topics we touched on:

Xierumeng brought up the various user scripts that need to be updated in order to work with the new UI and game changes. Leila asked for a list of scripts to see what we can bring into the game for you!

Also, Cloning will be reworked.

Sotheryn asked how the Community could help to bring forward the game’s vision. Besides buying small packs here and there to support the development team, spreading the word about Tau Station and especially sharing your feedback as you did so much in the past will be most beneficial, especially now as we’re back with weekly updates again!

While Sotheryn has a special task to collect all items of the game, Ovid explained that we also want to add a display cabinet to every profile to present cool items like collectibles (and achievements) to other Citizens. Leila emphasized that more collectibles will be added to the game.

What we’d love to see is more mission feedback now and in the future as the narrative team is applying a lot of changes a mentioned before.

More meetings for everyone

We will organize such meetings every 2-3 months to keep you all posted and to listen to you! We think it’s very beneficial and motivating to talk to each other. And we also want to start the Citizen Council again – dates will be announced.

Thanks again to all participants and those who wanted to join us, but didn’t have the time to do so. We’ll meet next time!

Cya next time in space again!
StarGazer for the team