Buckle up for 2 brand new missions, detail changes (as usual) and a fancy item for those who want to use respawns in a strategical way: welcome to an item the Community has been asking for…read on for all game update details. 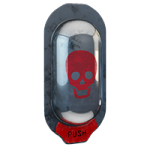