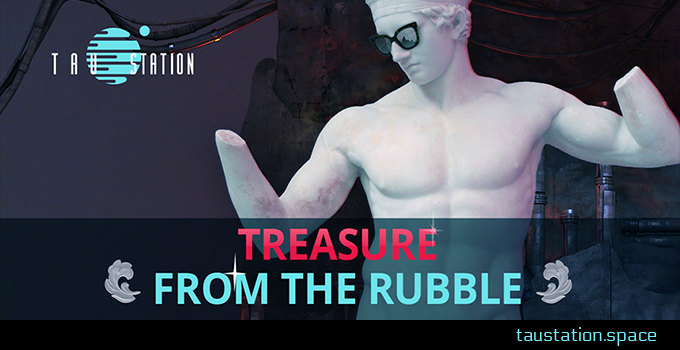 All across the star systems, those who have survived the Catastrophe dig and hunt in the ruins of the stations for relics of the past. Items from Before that we’ve lost the ability to construct. Objects that our ancestors knew how to use and make, which are now a mystery to us. Take a sneak peak into a private letter detailing the life of one of those who comes in contact with some of these artifacts …

There are untold treasures below the surface of the station. Under the cracked and fallen towers, beneath the rubble, among the bones of our forefathers. These precious items are our history, our past, and possibly … our future.

As I sit and wait for yet another one of your clones to activate across the star systems, I thought that I might take up the ancient art of letter writing and dictate a missive to you. That’s an old word for “letter.” I’m practicing writing in a manner that I have read in some ancient books too. Anyhow, I have so many thoughts to get out and so many things that I wanted to share with you. I know you’re not really dead, and yes, we’ve been through this many times, but I still feel the loss of you in these moments during which we can not connect. It’s worse, even, then when you’re out in the Black on one of your mining jobs. At least there, I know you’ll come back into range again and our CORETECHS connection won’t have such a delay. This, though, I’m not sure I’ll ever get used to. I do spend a great deal of time cursing the ice that you spend so much time with. Isn’t it funny how much I hate a thing that I, and in fact all, of the universe needs so much.

In any case, as you know, we wrapped up an exhibit here at the Grande Galaxie Museum and Gallery this week. (Don’t laugh. You know I love saying the full name out. It’s so pretentious.) Anyhow, the exhibit was all pre-Cat artifacts, and they were so fascinating. We had to have extra security because of how rare some of the stuff was. Many of it was on loan from that elderly woman, Justína from Paris Spatiale. Remember her? We met her at that fashion gala on Paris a while back. Siegfried introduced us to her. Anyhow, she lent us old statues, scraps of paintings, glassware, and a few very strange mechanical objects. None of which worked, of course. But they are fascinating to look at.

I asked her where she gets all these items. Can you believe that she has agents who scour the star systems, looking for these old treasures? I can’t imagine a life like that! Dusty all the time, digging into the rubble of a station. Unearthing who knows what and dodging Ruins Rats and other scavengers! Too much excitement for me. Justína said to me, “Many turn their eyes to the stars, pushing further and further away from Earth, but in the dirt of these stations, under the crumbled buildings and crashed ships is hidden the history of humankind!” I honestly think that if she wasn’t so old and frail, she’d be down there in the dirt with them, digging for buried treasures.

I wonder if the people who lived on these stations before us could have ever imagined that their trinkets and frivolities would be on display at some point for strangers from all over to gawk at and admire. Either way, I prefer to browse the objects in the galleries, locked away behind glass, with just the right lighting to enhance their details. Though I do admit, when we were setting up the exhibit, I had a grand time turning over and handling the artifacts. Getting to look up close at them, pressing the buttons on the strange technical items, reading the things stamped into the statues. I love that I get a closer look than the regular public! But I’ll leave it up to them to push aside the regocrete, bones, and dust.

As I’m sure you’re suspecting, the exhibit has been great. I wish you could have made it to opening night. There was champagne! Brought over by some of the visiting Gaule officials from Paris. We had tofu cheeses and grilled bio-meats on sticks, and Félicien hired extra staff for the evening, who walked amongst the crowd with trays full of appetizers and flutes of sparkling golden liquid. I missed you being here telling me to be careful with the bubbly. I ate too many grilled bio-chicken skewers. They were so juicy and, well, I guess I’ve been pretty bad about stocking rations with you gone.

Anyhow, I should wrap this up. I need to get back to work breaking down the exhibit and packing up the collection to be transported back to Paris. I hope that you’ll be waking soon. I can’t wait to connect with you again, and I’m looking forward to the week off that you’ll have during your adjustment period.

With all my love,