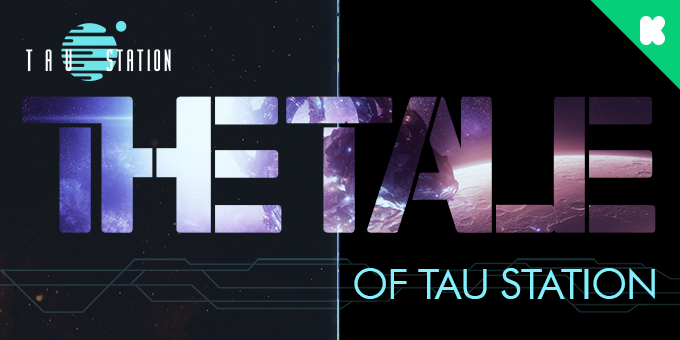 Tau Station has achieved near geosynchronous orbit around Kickstarter! With this new phase initiated, a number of questions come to light concerning the Catastrophe and other more mysterious tales of the galaxy. Please accept the following transmission in order to upgrade your security clearance!

Disclaimer: Any mental or physical harm, death, or dismemberment that may arise from knowing too much is the sole responsibility of individuals choosing to continue past this point.

We traveled deeper into space than our histories could have imagined.

Our progress was everywhere.

We had it all.

Then the Catastrophe came.
Blazing through the Galaxy, a digital wave of destruction.

Everyplace once safe was a wreckage, a barren wasteland, often a battleground.

From the ashes, we grasped at what was left of humanity’s thread. We wove from it our new lives.

We find opportunity in the shadows.

We find redemption in the light.

We fight to survive.

We are not many, we are one.

No matter the alliance.

We are humanity’s last hope.

We can’t let another Catastrophe end us.

This is the story of us all.

Tau Station has many tales to tell. Station denizens have stories of love, mystery, or danger immersing you in emotion, suspense, or even laughter! The galaxy is a dangerous place, sometimes that’s funny!

Central to all these tales, however, is a core story that weaves through them, gathering all the threads and tying together a narrative that hides in the shadows, just behind the world we can see.

The Catastrophe, a galactic, near extinction level event changed everything. Hundreds of cycles ago, it swept through every habitat of humanity and brought our civilization to its knees, less than 5% of us survived. All human populations living on planets were wiped out, just as many on the orbital stations that drift throughout every star system.

Those that survived spent the next cycles in darkness, silence, and separated from each other. Only recently have things started to move at an upwards trajectory once again, as more and more stations are discovered and brought back into the protection of the surviving governments.

When you awaken, this knowledge, these concepts are all that drift to the surface of your consciousness. Any sense of self, of identity, has myseriousely been erased. It also appears you are a clone, meaning whoever you were must have recently died…or been killed.

Survival is at the forefront of everyone’s mind, the dark years after the Catastrophe having been so recently experienced. Now, however, certain groups are beginning to ask questions, the right questions, dangerous questions.

What caused the Catastrophe? Was somebody behind it? And finally, could it happen again? As you try to answer these questions, you will find a fair amount of danger attached to trying to glean the answers which, in turn, only begs more questions.

Tau Station is currently achieving orbit via Kickstarter! Join the crew and help answer the mysteries behind the Catastrophe by sharing our campaign now!