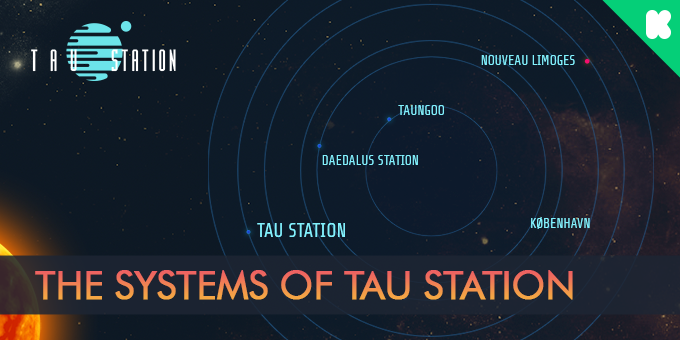 Today, we want to have a look at how far Tau Station has come since we first shared our galaxy with you in 2016. There are currently five solar systems implemented, which you can explore at your own leisure within the game, and one more is soon to launch (or so they say – Freebooters have a tendency to sidestep expectations). There are currently 83 systems we have planned as a grand total.

With so many places to explore and stories to take part in, it’s useful to get some space-bound perspective. Last tenspan we gave you a primer to the story through The Tale of Tau Station, so now it’s time for an overview of star systems!

Warning: As your CORETECHS connects to our presentation, we advise you to stop whatever other tasks you are carrying out to fully focus on the splendor of our human-crafted space stations.

The universe of Tau Station is populated with hundreds of stations circling stars you know (like Sol, our sun) and others you may not know much about (such as the red dwarf YZ Ceti). Each star is orbited by a number of constructed stations where human life flourishes in its myriad forms… And suffers grave losses. When the Catastrophe struck, it affected each station in a different way – we might call it “the Catastrophe”, but it was a series of events occurring simultaneously across the universe, events unique to each station.

As stations rose to these new challenges, they grew from these experiences.  In København, the multitude of ships that crashed have now become buildings for its citizens, who are quite literally building on their past. Moissan was saved by a particular strain of fungus that grew when no other food would, and is now used for construction and trade as well as consumption. In some places successful interim governments dealt with the crisis (such as in Bordeaux), while other stations like the upcoming House of Congo were abandoned to their own fate. Some could not rebuild, having no survivors – Cape Verde Stronghold and Asimov Freehold are both populated by newcomers, ever wary of the deaths that befell their predecessors.

Another side effect of the Catastrophe was isolation. As stations couldn’t communicate with their neighbors or governing bodies, each developed in a new direction. While Orwell Stronghold focused on high-tech research, its people working alongside androids, gynoids and xynoids, the Roswell Group of L726-8A Jump Gate re-enacts Old Earth’s 1940s America. Prometheans believe you only have one true body and refuse to have a clone, while many Citizens are grateful for cloning’s safety net, and yet others use clones as a reason not to care if they hurt people. From art-focused stations like Nouveau Limoges, to the space pirates of Caen Stronghold, each system and its corresponding stations ask different questions about the universe of Tau Station – and, as with all good science fiction, help us look critically at our own present and future.

While all stations are different, there are common threads uniting them in the form of factions. The Consortium is the largest, ruling over the majority of stations, with the Gaule Protectorate hot on its heels. Very few are independent of these two powers, choosing to govern themselves despite the Consortium and Gaule’s combined pressure. There are even some stations that prefer their own brand of anarchy, calling themselves Freebooters. Which faction a station is aligned with tells you much about their predisposition and culture, and having multiple factions present in one system often leads to altercations, mistrust… and a chance to grow.

The universe is vast; hugely, mind-bogglingly, vast. There are five systems for you to explore in Tau Station, with a sixth coming soon and at least 77 more in the works! What you see is only the beginning.