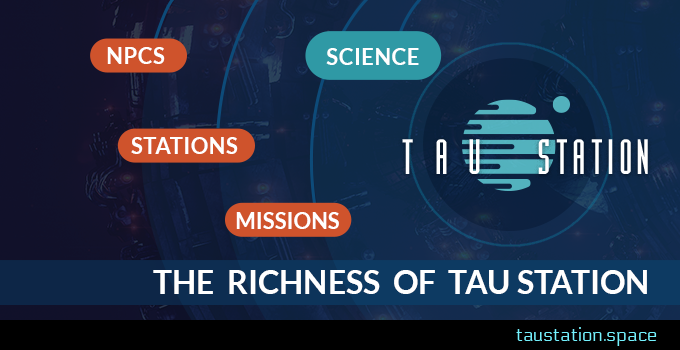 The complexity of Tau Station requires a huge amount of work and care. Extensive research and times goes into every aspect of the game. Be it scientific, historical, or otherwise, we strive to make the Tau Station universe believable and as realistic as possible to further the experience of immersion and enjoyment. Read on to learn more about the ways we spend the time needed to bring this realism into a sci-fi game set hundreds of years into the future…

When creating the non-player characters (NPCs) that populate our vast and varied stations, one thing remains a central focus to the core of the experience: no two places, no two cultures, and no two people can ever truly be the same. The variations in approach to this philosophy by our narrative designers are as unique and expansive as space itself, and we strive to create a richly woven tapestry with meticulous weaving and ambitious creativity. Through research, study, and exploration, we reference real world history, places, and people in the wide web of universe crafting. This attention to detail and desire to make an expansive, yet holistic universe is carried over into every aspect of the game.

We want the stories in Tau Station to be a compelling experience where the player gets to forge their own path and choose their own outcomes. For example, here’s the design of one of our missions: 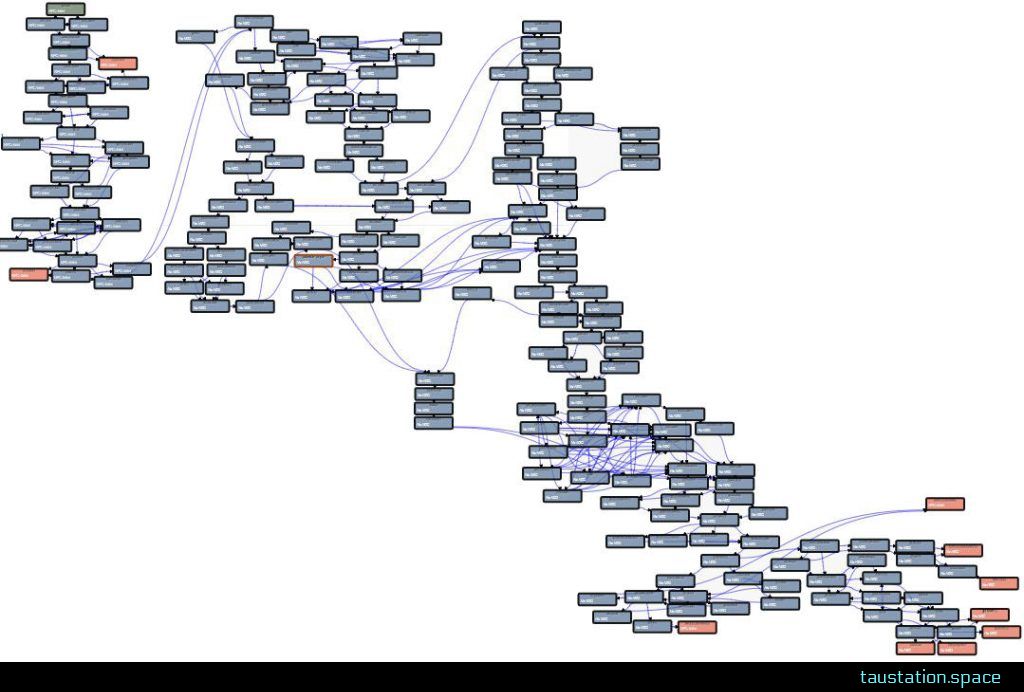 And that’s just the first draft! The mission became even larger when additional endings were added to correlate to earlier player choices. Providing this sort of narrative depth is time-consuming, but worth it in the end to grant players the opportunity to explore the stories in a variety of ways and through a plethora of choices. We even have one mission which is complicated enough that there were over a million paths through it (seriously, graphs get complicated quickly).

You Can’t Have Sci-Fi without Science

We also pay attention to science, of course. Though we have to take shortcuts because Tau Station is a game, we try to at least make things plausible. For instance, stations orbit planets or dwarf planets, and this is why shuttle ticket prices vary. While we do limit ourselves to circular orbits (it simplifies things), we use a well-known orbital period calculation to ensure orbital times are correct. We even used the orbital period of the International Space Station to double-check our calculations.

For spaceships in the Tau Station universe we assume they’re using antimatter drives with a base efficiency of 50%. So how do you know how much antimatter it takes to move a given ship a given distance? Well, you need to know the mass of the ship, how fast it accelerates, and what distance you want to travel. From there, it’s trivial to calculate the force, in Newtons, and use the famous E=mc2 equation to determine the amount of energy, in joules, produced by matter/antimatter annihilation to travel the distance required. The Perl code looks like this:

Interestingly, by working hard to use real science wherever we can, we’ve found that many “difficult” aspects of the game became self-balancing and many questions answered themselves merely by consulting the equations.

For example, we’ve often been asked whether we take into account relativistic effects. If you work the math, you find that the amount of antimatter to get ships close to enough to light speed for those effects to kick in is so great that it’s not feasible. Relativistic effects are thus so small as to be unnoticeable. Further, we have limited ship accelerations because otherwise, passengers and crew would be turned to jelly. We’ve also found that traveling from Earth to Mars at a constant 1G acceleration, assuming a halfway flip, takes about two days (or about two weeks to get to Pluto). Even bumping the acceleration to around 12Gs only reduces the Earth/Mars transit time to about 17 hours. Naturally, this has wide-ranging impact on gameplay and we’re well aware that you don’t want to wait a day or more to travel across stellar systems.

All of this only scratches the surface of what we’re doing behind the scenes to make Tau Station into an immense, incredible experience.