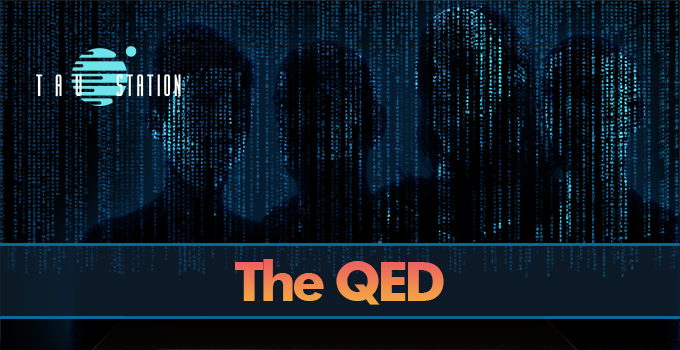 “Love those who seek the truth; beware of those who find it.”
Marcel Proust (attributed).

Recent reports indicate that a secretive new branch of Benevolent Dynamics has begun researching the events surrounding and attributed to the Catastrophe. Read on below for a full brief.

This newly formed ‘think tank’ as the Benevolent Dynamics PR department is calling them, has been named the QED. They, allegedly, seek only to answer the mystery behind the Catastrophe in order to finally understand what caused the near extinction level event and, presumably, avert such a situation from occurring again in the future.

Whilst Benevolent Dynamics operates outside of governmental jurisdiction under the auspices of an independent technocracy, both governments have expressed alarm and suspicion at the formation of this group and their investigation. While neither government has the authority to impede this investigation in any official capacity, they have both declared that any citizens offering aid will be viewed as potentially criminal and may be subject to interviews.

Lending weight to governmental suspicion is the fact that the QED seem to operate on a highly secretive, if not clandestine, basis. Benevolent Dynamics refuses to divulge any names connected to the group nor have they released any reports of findings to date.

It has been reported that while the core members of the QED are comprised of scientists and researchers with varying areas of expertise, the bulk of their initial investigations are handled by field operatives who are out-sourced by Benevolent Dynamics. These operatives are, allegedly, vetted via an analytical process that quantifies various CORETECHS acquired metrics that pin-point certain characteristics above others. This, no doubt, also troubles the governments as they see such tactics as ‘fast and loose’ as such operatives cannot be tracked and reported on. It is highly likely that anyone identified as a field operative for the QED will most likely be detained and questioned at length.

From a logistical standpoint, it does, perhaps, make a certain amount of sense to investigate the Catastrophe at this time. Infrastructure, economy, and even society to a degree have started to regain a foothold. However, the event that wiped out over nine tenths of our species remains unknown. We know it happened, we roughly know how long ago it occurred, but beyond that, we have no more information. The thought, or perhaps the absence of it, looms over the collective consciousness of humanity like a pendulum from an ancient torture device, waiting to swing back down from the darkness where we saw it swing up into.

Some may fear that the QED are delving into knowledge that should best be left alone, or that what they discover may open up a colossal can of space worms. But perhaps this is the fear of the unknown that our species has always struggled with…