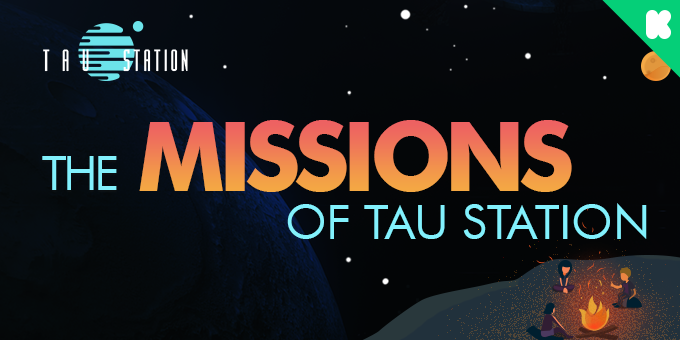 I like a good story well told. That is the reason I am sometimes forced to tell them myself.

One of the core pillars of Tau Station are its missions. They are the main medium by which you can experience the many stories of our galaxy, how we introduce you to its denizens and engage you with their struggles, their passions, fears, their loves and laughs. Our missions weave throughout the systems and their stations, tying in themes and genres while guiding you through each narrative.

“A good story well told,” is very much how we approach the crafting of our missions. We want them each to feel like a unique short story that takes you on a journey, be it of emotion, humor, adventure, or the like. We craft them with the user experience very much at the forefront of our design, wanting to engage you in the most satisfying way possible. Aspects such as subtext, agency, and conflict are some of the lenses through which we view and review our missions many times over before we make them live.

There are a number of mission types that each focus on a part of Tau Station that we want to help you delve into. What we refer to in game as Missions tell a variety of tales and tend to explore the thematic focus of the station they originate on. They are the people’s stories, introducing you to characters and seeking to engage you in a number of ways. Some example include:

An ancient and apparently unmanned vessel has arrived at Sol Jump Gate. Various factions demand ownership when the ship suddenly comes to life and demands you, and only you, enter to defuse the self-destruct protocol it has just initiated!

A series of murders framed as grotesque art pieces will take the player and their sleuthing partner Qui9 around Spirit of Tianjin. Question suspicious patrons, check recordings and gather clues—but know the murderer may also be keeping an eye on you.

A once-revered Tanegashima fleet admiral languishes in a brig cell on a treason charge. She counts off the days until her capital sentence, troubled by one lingering question about her past. Can you help find the answer before her time runs out?

Our Mission Dispatch (and two and three) posts can further tease you with a little extra detail on many more if you find your curiosity piqued!

Weaving through the aforementioned Missions and the stations they take place on is a newer development we are adding very soon. Core Stories grab the mystery at the heart of Tau Station and guide you through the shadows to try and unravel its dangerous plot line. Core Stories will have a unique functionality that focuses on this epic scale quest that will take you through the galaxy and where your choices can branch off into a multitude of possibilities!

Story is quite obviously front and center in a lot that makes up Tau Station. If Tau Station was some sort of time-traveling, intergalactic alien, narrative would absolutely be one of his and her hearts. Each beat tells a tale that we have carefully woven with utmost respect and care so that it reads like a lovingly crafted short story that you direct.