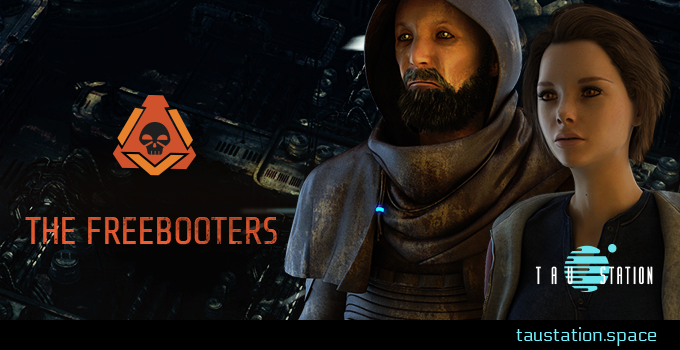 Oh, better far to live and die
Under the brave black flag I fly,
Than play a sanctimonious part,
With a pirate head and a pirate heart.

Since the Catastrophe, the Consortium and the Gaule Protectorate have each been doing what they can to bring stations, left out in the cold by the destructive forces unleashed during those dark days, back into the fold. There are, however, those who show zero desire to be brought back, embracing instead the wild and unpredictable nature of life on the fringes of known space. Allow us to introduce the Freebooters.

In the far reaches of chartered space lie stations that seemed to thrive on the initial radio silence that followed the Catastrophe. Many of these stations were forced to get by without the help of the established governments, embracing instead a very necessary ‘survival of the fittest’ type philosophy in order to endure. The resulting cultures that formed over time are now deemed too wild and uncontrollable an entity for either the Gaule or the Consortium to consider bringing under their yokes.

Stations that have adopted the ‘Freebooter’ status as their affiliation prefer to survive the rigors of space on their own terms, and enforce what laws may be necessary (if at all) through violence and harsh consequence more often than not.

Most Freebooter stations lie in the fringes of colonized space. One notable exception to this is the station known as Cane’s Legacy that resides within the Bernard’s Star system. While Cane’s Legacy is relatively closer to the central occupied regions, at least in comparison to many other Freebooter stations, it still politely and firmly maintains its less than lawful affiliation. It does so somewhat smugly by way of various powerful armaments that had been salvaged from a number of battle cruisers during early settlement and subsequently retrofitted directly onto the external housing of the station itself. These armaments serve quite effectively as the intergalactic version of a ‘No Cold Callers’ sign.

It should be noted that Freebooters are not wholly unapproachable.  On the contrary, since a more widespread contact has been established, Freebooters have been known to trade with others on a regular basis. The only stipulation is that they not sense any weakness in their dealings. Any perceived lack of strength will often translate to them simply taking anything they decide does not need to be paid for. It should also be noted that Freebooters often have a very loose definition of what constitutes ‘weakness’…

I’ve had my fair share of dealings with the Freebooters. They’re not all bad, some of them even have hearts of gold. Though in all likelihood, they probably stole those from someone else.