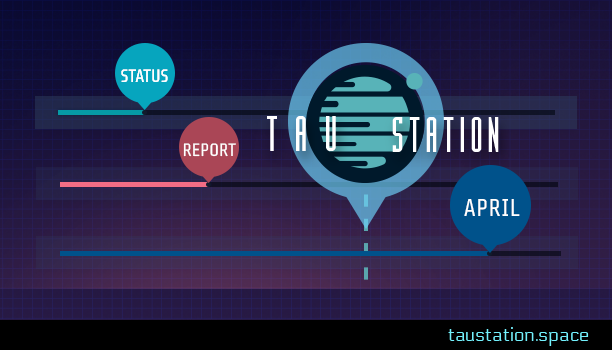 April is over! Time to have a look at what was achieved last month and what the team will be working on for May. The biggest milestone in April was, of course, the live launch of Tau Station; we’re very happy to welcome many new citizens already! The process of expanding the game with weekly content updates will be continued, and a major feature is coming closer. Read on to learn more …

The status reports contain major aspects of the work done on Tau Station each month. As we’ve started to provide changelogs for every game update, you can find way more details, including all smaller changes, in these dedicated posts. Links to all updates / changelogs that happened this month are listed up at the bottom of this article.

A lot of work was done to get the game ready for live launch. On Wednesday, the 18th of April, our PEGI-3 rated science fiction game finally opened it gates. Since that day, everyone has been invited to start their adventure by signing-up and starting to play!  You can access your account via browser from PC, tablet, or smartphone. We follow WCAG 2.0 AA standards to provide an accessible game, and we appreciate getting your feedback on that topic (and all others) as it is a matter of great importance to us. The dedicated blog post about the launch also contains starting tips.

Missions in the Sol system:

Missions in the Alpha Centauri system:

You can find a short, detailed summary of every single update in their according changelogs, which we have been publishing on an a regular basis since we started the Closed Alpha Test. Here are all of the changelogs for April 2018: