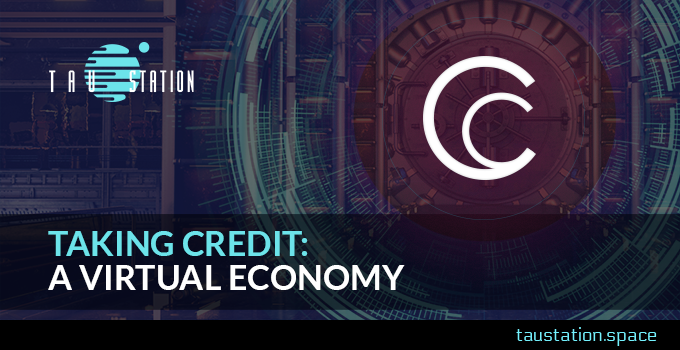 In the time following the Catastrophe, almost all infrastructure had collapsed. Many networked systems had crashed and much that existed within the digital realm was erased as if a virtual wildfire had spread through the galaxy’s servers in one digitally-devastating wave. It resulted in a catastrophic loss of both life and data on an unfathomable scale. Isolated systems were, for the most part, the only element to survive and, due to the nature of its digital existence, the credit was one such system. Capitalism, always humanity’s most tenacious trait, had managed to survive the apocalypse.

Many cycles down the line, when both scavengers and salvage teams began sifting through the detritus of civilization, one discovery that stood out was that of isolated virtual units of digitally-signed numbers that could be scanned and transferred via the CORETECHS. Virtually unhackable, these digital components appeared to utilize a variation of the same technology that encrypts amygchips, known as an “Obi homomorphic lattice”.

These units, known as ‘credits’ were essentially a finite system that could be collected, transferred, and utilized as legal tender but never hacked or duplicated. Indeed, this was surmised as their likely use Before as well. The quantum mathematical nature of encryption that houses credits in software merges with the CORETECHS, also encrypted with the lattice. This resulted in an interesting security feature. Once downloaded, credits can only be relinquished by host request or if the entire housing system is rendered dormant. The latter is a polite way of saying there remains a major security hole: the CORETECHS of unconscious or dead victims have been known to leak credits.

What remained of humanity took to credits like the natural-born capitalists we are. What followed were a tenspan or so of cycles known as the ‘Credit Crunch’ with credit prospectors scouring stations and derelict ships for every credit they could download. Not long after, an independent organization was formed as a means to transfer and keep credits safe, existing networks were salvaged and connected to the mesh with pioneers in mesh and network hacking being roped in to keep the system secure. The Pangala People’s Banking Network was thus born out of a growing need for trade and commerce.

Pangala People’s Bank remains an independent intermediary whose sole purpose (in theory) is the security of the credit network and privacy of customers transactions.  Seeing the need—as well as advantage—in neutrality, Pangala set up two headquarter hubs in both  Gaule Protectorate and Consortium stations thus maintaining support from both factions.  When it comes to credits and a galactic economy in general, an autonomous and unbiased system was, everyone begrudgingly agreed, in everyone’s best interest.