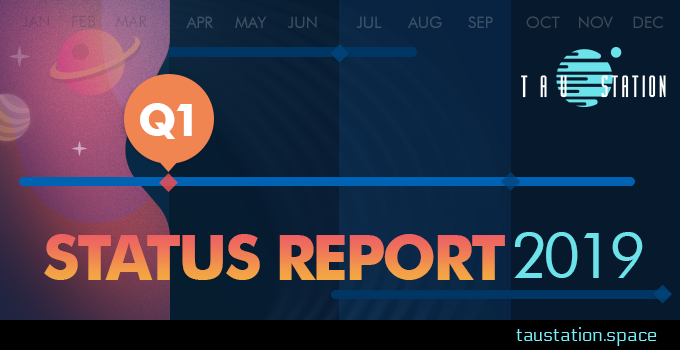 Welcome to our first quarterly status report. It’s time to review changes in Tau Station from January, February and March 2019!

5 new missions and the YZ Ceti system, with 4 stations was added. Bodyguards are now at your service; the game’s beginning has been improved for new citizens; and there are 89 new item images, plus 40 brand new epic items for Syndicate Campaigns. Lots of new University courses, the bond log, and various other improvements were also added. Last, but not least, there’s a new dedicated section in your CORETECHS for the Citizen Council.

We’re delighted that the first Citizen Council will start to work for all our Community members in close cooperation with our dev team soon. Thanks again to all candidates and all Citizens who participated in the election on day 41, cycle 201.

The Council members had their first meeting to elect their board on day 53. With the next game update, the Council page in your CORETECHS will show the results. This also means that soon your Council will step-up their discussions, and start asking for your opinion on what to present to the Tau Station team in their regular meetings. We’re looking forward to starting this collaboration with you!

The new system with 4 stations is under control of The Consortium.

Besides several small improvements to existing missions based on your reports, 5 new missions have been added:

Besides the 40 brand new epic items for Syndicate Campaigns, 89 artwork updates have been added to remove the placeholder pictures on the items listed below. The numbers in brackets indicate the item’s tier.

You can find a short, precise summary of every single update in the corresponding changelog. Here are all of the single update details for Q1/2019:

The status reports contain major aspects of the recent work done on Tau Station. As we’ve been providing changelogs for every game update, you can find way more details, including all smaller changes, in these posts. Links to all updates/changelogs that happened in the quarter of this status report are listed above.