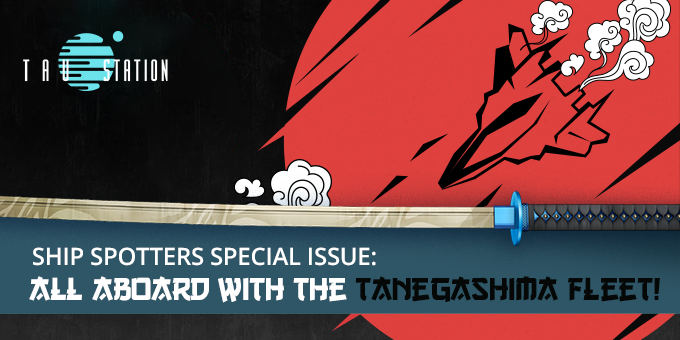 Suit up, ship spotters! Welcome to a very special issue of the galaxy’s number one feed for all matters craft and vessel-related. Today’s edition is a real doozy; covering a visit aboard the Tanegashima Fleet’s most striking specimen. As always, I – Cosmo Sheridan – am your guide. Let’s get started!

Last tenspan yours truly woke to find something curious in my inbox. After more than a cycle of failed attempts, I finally got a positive response from Admiral Hukon of the renowned Tanegashima fleet. ‘Request granted’ read the subject line. And – let me tell you, fellow spotters – I was pretty stoked!

Usually extremely private in their affairs, the Fleet Admiral had nonetheless decided it would be rude to reject another of my requests to see their capital ship, the Tonchō.  Residents of Barnard’s Star system will know this impressive beauty is stationed at Hopkins’ Legacy. The Tanegashima Fleet’s arrival here saved it from cycles of post-Catastrophe disorder –  turning it into the well-run independent outpost it is today.

So imagine my surprise when the response came. I couldn’t believe my CORETECHS! It turns out the Admiral visited my spotters feed and discovered he liked my respect (or ‘worship’ – as he called it) of space-faring hardware. He was happy to grant me a few supervised segments aboard the fleet’s Capital Ship, the Tonchō. A coup for Cosmo!

I shuttled over to Hopkins’ Legacy (no, dear listeners, the Ship Spotters budget doesn’t stretch to Quantum Telepheresis travel!). Then onto the Tonchō via one of the fleet’s private transporters.

Views of the ship were magnificent on approach. Despite the pilot’s care to guard the Tonchō’s military secrets, I caught a glimpse of its renowned phaser arrays and aft torpedo launcher. Looking down the launch tube, my heart skipped several beats!

Already I knew the fierce reputation of the Tanegashima Fleet was well-deserved. It’s no wonder the two great powers tread carefully in dealings with the fleet and their Hopkins’ Legacy base. These folk know their way around the big black. Woe betides whoever goes up against them in a gunfight!

Next I marveled at the Tonchō’s unique ‘z-shaped’ thruster rigs as we approached its dock. By now I was giddy from seeing such superlative ship design up close… I’d barely had time to catch my breath when we docked aboard. Admiral Hukon met me there.

The Tonchō and Tanegashima warrior code

My fellow spotters, the Admiral’s tour of the fleet’s prized possession was an unforgettable experience! The interior of this 6-million metric tonne masterpiece is like none I’ve seen before. There are no bare bulkheads here. Every corridor displays homage to the proud Tanegashima warrior code.

At every turn, we passed ceremonial forged-steel blades from centuries past on the walls. Glinting, curved swords, and battle-burnished daggers, each aloft on its own pedestal. Admiral Hukon explained they remind the crew of their heritage, and their duty.

Elsewhere, traditional cross-padded armor sat in a glass showcase at the intersection between two walkways. The protective plates were carefully – or even, lovingly, arranged under a respectful and dignified spotlight. I read the ancient Tanegashima proverb inscribed underneath: ‘Fall seven times and get up eight’. The Admiral bowed gently before it.

And then, something to top it all! On the command deck, we walked across a central foyer adorned with many large circular shields. Each is hand-painted, as the Admiral told me, with intricate scenes of ferocious battles from Tanegashima military history. What incredible work!

Many feature the Tonchō itself, adjacent to an explosion. A recently-vanquished enemy ship, perhaps? The Admiral merely nodded, without divulging further details. But one thing is certain: Tanegashima don’t forget their military exploits in a hurry.

Finally the Admiral politely indicated that my segments were up and it was time to leave. I said my thanks and proffered a gift of some Vkusno delicacies I’d picked up on my journey over. This prompted the Admiral into a series of small, grateful bows.

Within segments I was back on Hopkins’ Legacy catching my connection home and preparing these impressions for you, fellow spotters. Hope you’ve enjoyed it as much as I did!