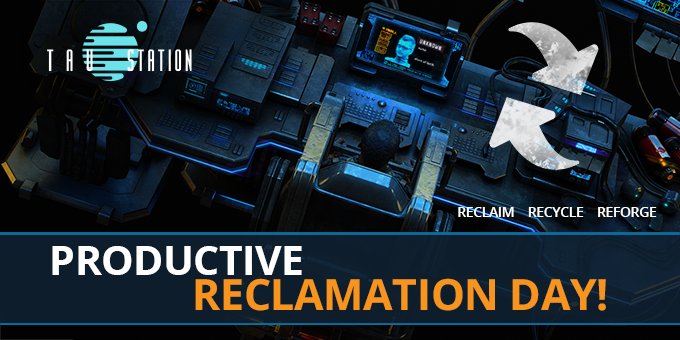 When the world is reborn, when all that we knew is claimed by fire and darkness, its citizens are left struggling to find the light. It is difficult to start anew, to evolve and adapt, without knowing what we have left behind. One needs to reclaim their past before they can leave it behind. Reclamation Day is designed as a day of rebirth. Reclaim, recycle, reforge your narrative!

Once a cycle, during this special tenspan, intelligence branches of the goverments offer their services to the public in order to help them to learn who they were Before, where their families may have come from. In accepting this knowledge, they can then leave it behind. An evolution of self through closure of the past.

Humanity has been rebooted. After the Catastrophe, those of us who remained could only focus on survival. Much of the knowledge of who we were before, where we came from, slowly but inexorably drifted away into the black as our grandparents and parents struggled during the dark years. Reclamation Day, the brain-child of governmental psy-ops divisions, came about as a way to help the collective community emotionally evolve past the near extinction level event that has been on humanity’s subconscious for hundreds of cycles and focus on rebuilding from a fresh place.

At the close of the tenspan, an elaborate ceremony takes place in the ports of many stations. Elaborately crafted metallic eggs are sold to those citizens who achieved reclamation. Their histories are uploaded into these intricate receptacles and they are then all released into the black, drifting away and allowing citizens to start anew.

This all is, of course, no small task. During this tenspan both the Consortium’s and Gaule Protectorate’s intelligence branches tend to outsource much of their investigatory work towards the reclamation of private citizen’s pasts. This is authorized as it does not (for the most part) involve any measure of  threat to galactic security .

The mesh will accordingly updated with such jobs, so any enterprising citizens with an eye for investigation should watch this space!