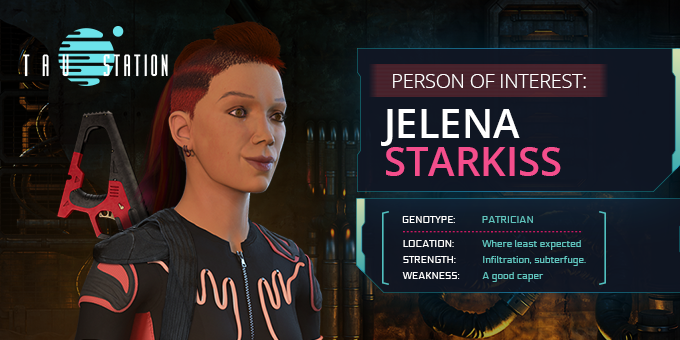 During the darkest of times, while a candle may provide light that is both pure and illuminating, a blaster bolt often shines brighter and cuts right to the heart of the matter. Where law protects, guides, and nurtures, ofttimes a dollop of chaos can expedite matters and inspire greatness of solution! Both sentiments can be attributed to  Captain Jelena Starkiss.


The QED, being an independent think-tank of Benevolent Dynamics, technically operates outside the official jurisdiction of Consortium or Gaulish law. That said, our own protocols dictate that we do our best to maintain proper relations with both governments and work together towards a more illuminated future for humanity.

We have often made use of such law-abiding and, indeed, law keeping individuals as Captain Vollmer in our investigations into the Catastrophe. Captain Vollmer’s sense of law, order, and honor have proved invaluable on several occasions.

Captain Jelena Starkiss, to use one of her names, is not such an individual. She provides an alliance of a different, and often rather two-way, nature. Miss Starkiss is a highly skilled individual and, to her credit, knows exactly how much said skill is worth, and, indeed, often quotes this in a price of credits or bonds!

A number of our field agents have reported coming across Miss Starkiss in any number of locations all across the galaxy, operating under a number of aliases. It is, of course, impossible to hack the CORETECHS in any such way as to alter one’s designation, so we must assume some measure of human error in these reports.

Furthermore, such confluences often result in misadventures that ultimately provide something of value for all parties involved, or rather, those parties lucky enough to be allied with Miss Starkiss at the time. Other parties tend to be the providers of said value rather than its beneficiaries.

In conclusion, it is with no small amount of awe and equal measure of trepidation that this reviewer authorizes Captain Jelena Starkiss as a Person of Interest.