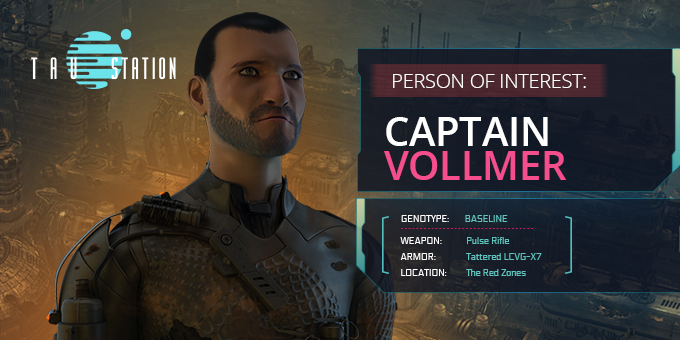 These are interesting times we exist in indeed! Finally, after hundreds of cycles after a near extinction event that, to this day, has left our civilization with a galactic sized mystery and source of insecurity as a species, we are now in a place to begin asking questions. A think tank has been created and freelancers evaluated for field research.

Yet for every step forward, for every new clue uncovered, we meet resistance, even hostility. To that end, we must draw others to the cause, making allies and friends. And, if scientific protocol is to be observed, these persons of interest must be meticulously cataloged! Today it is my distinct pleasure to start the process off with the honorable Captain Vollmer.

Captain Vollmer is a native of Tau Station, born and bred there. He received his training in security directly from the Consortium military service and very quickly became a career officer. He earned a number of commendations during his early days, leading raids and helping establish a more secure station for its residents.

It has been reported that the Captain is both staunchly law abiding, as well as enforcing. At the same time, we have found him to be a helpful personality who seems to go out of his way to help citizens when they come to him with unusual requests or interesting problems. Recently, for example, he was instrumental in stamping out a rather ingenious hacking scheme, reportedly with the help of an outsourced professional.

I would conclude this report by stating that Captain Vollmer, in this analyst’s most humble opinion, will be invaluable for our own purposes. His expertise in all matters of security and investigation, as well as his willingness to go above and beyond, especially should his own curiosity be titillated, can be harnessed as a real boon to our own investigations.