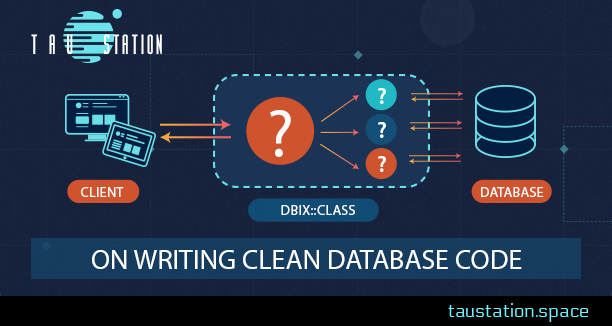 In earlier articles we looked at the way we use “economic exchanges” to simplify complex code into a series of small understandable steps. We use similar ideas to build up business logic in our DBIx::Class model layer: combining multiple small predefined queries together to create more complex conditions for generating SQL queries against the database.

Read on below if you take the challenge to read “0011001010” language of our database experts who love to share knowledge with you again about clean code.

DBIx::Class (often known more simply as DBIC) is the “Object/Relational Mapping” system we use in Tau Station. DBIC is not a really a full ORM in the traditional sense, but can be better described as:

The Bad and the Ugly

We often need a list of visible player characters which we might also restrict to those on a specific station, or perhaps just within a specific station area. We could use a single large query but since game requirements change we would have to maintain this long-term and continually risk introducing new unexpected bugs. Such a DBIC query might look something like this:

This is much more complex than we’d like so…

DBIC to the rescue

Fortunately DBIC supports the concept of “chaining” which allows us to create a number of small, understandable and maintainable queries that can be chained together to create more complex queries. Its documentation has this example:

Each of ‘good’, ‘cheap’ and ‘recent’ are implemented as individual methods known as ‘predefined queries’ and we can test them individually and re-use them elsewhere. Reduced code complexity and reusability all in one: success!

A player’s character might be travelling from one station to another. We want only characters who have arrived at their destination:

… and who have been active in the game recently:

… and they must have a valid visa for their current location (this one is a little more complex):

… also remembering that characters who are in a hotel room cannot be seen:

… and we cannot see anyone onboard their own ship:

Since we need all of those queries to be chained together to create the
‘visible’ query we create this new method:

… which would result in an SQL query along the lines of:

Now we can narrow down our predefined ‘visible’ search to those characters in the same station area as the current character:

Using small predefined queries that we can chain together allows us to develop faster and write testable and maintainable code. We also find bugs more quickly and can fix them more easily without risk of breakage.

The above code is, of course, subject to change.