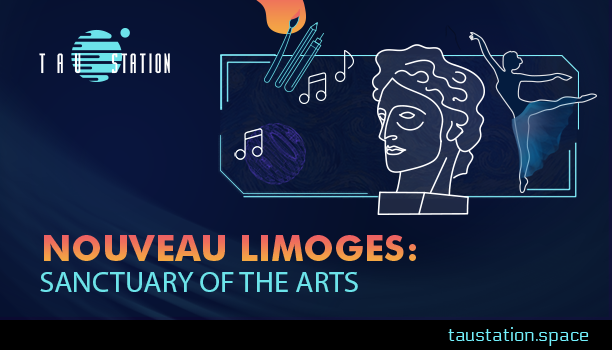 Founded by wealthy Gaule philanthropists looking to fashion a station devoted to the arts, Nouveau Limoges has long existed as a haven for artists, poets, musicians, and idealists. With its reputation for independent thinking and a resistance to authority, the station has always been seen as somewhat of an eccentric anomaly to the Gaule administration. With its large population of free thinkers, devoted to creative pursuits, the government was often at odds with the non-conformity of its citizens. The imposition of tighter control was met by increasing civil disobedience and the threat of outright rebellion.

In time, a compromise was reached by the Gaule and the people of Nouveau Limoges. Henceforth, the station would be governed with a lighter hand. The government would be still in charge, but would allow the citizens greater say in how they were governed. After the Gaule shifted their attention to establishing stations in Alpha Centauri, Nouveau Limoges became the remaining Gaule presence in Sol, and entered into what’s been called the “Golden Age” of its artistic and cultural development.

And then the Catastrophe happened. Famine. Communication blackouts. Drought. Panic. A breakdown of essential systems.

Unfortunately for the station’s citizens, it wasn’t just the Catastrophe they had to deal with. Desperate to establish order in the disaster’s wake, the Gaule administrators of Nouveau Limoges accepted the assistance of the recovering Consortium. Some say they had no choice in the matter; they were isolated, and cut off from their own government. In any case, the Consortium moved quickly to consolidate its presence and took control of the station’s recovery. Thus began the reconstruction under Consortium supervision. At first the citizens were grateful for the help, but as systems and infrastructure were stabilized, they began to struggle against their benefactor’s increasingly harsh rule. When, according to the Consortium, reasonable demands and the need for community sacrifice were ignored, martial law was declared. The Consortium began a campaign of measures aimed at stamping out all dissent.

This period became known as “The Sorrows.”  All forms of resistance were punishable by imprisonment or exile. Citizens were initially asked to volunteer for recovery work but were soon drafted into forced labor. “Desperate times call for desperate measures,” the Consortium explained. “We must work together or we will die together.” During this period, Nouveau Limoges saw an influx of Consortium citizens, many came to help, other to administer, and some for exploitation. To this day, even after being returned to Gaule administration, Nouveau Limoges has a sizable Consortium population.

The return to Gaule rule would signal the official end of “The Sorrows” and the re-establishment of Nouveau Limoges’ artistic and cultural heritage. Though its “Golden Age” may never be duplicated, the station has quickly regained its reputation for nurturing the arts. Artist and Craftsman Guilds are once again flourishing. Markets are busy. Museums and galleries are open. New plays and music are being performed.  Nouveau Limoges is once again a cross-road of free-thought, creativity, and independence. A booming market of artistic trade and craftsmanship. A refreshing mixture of the mundane, the exotic, the profound, and the rare.

Through artistic triumphs and devastating losses, Nouveau Limoges has re-emerged to become a shining beacon of human expression. There’s an old Gaule saying, “For better or worse, Nouveau Limoges will change the way you see the universe and yourself.”

Authored by Will Hiles