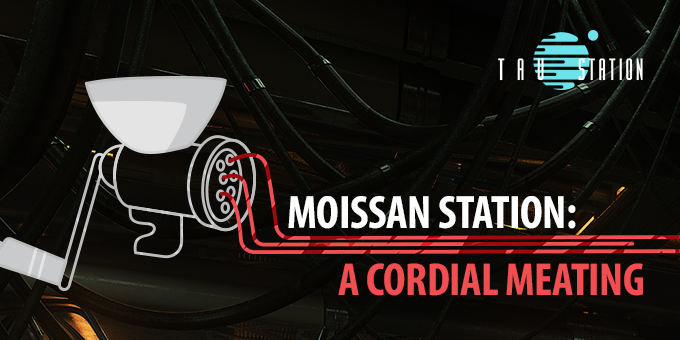 “And when I ate you, we would grok together and nothing would be lost and it would not matter which one of us did the chopping up and eating.”

This time period corresponds to a tradition from Before that venerates the spookier folktales and mythoi of our ancient cultures. Today we bring you a report on the ghoulish mystery that surrounds the station known as Moissan! Read on to discover more about the rumors of this alleged dark harvest.

Moissan station resides in the Alpha Centauri system. Once, it was known to house the very pinnacle of food replication technology. Here would flock the gastronomes and connoisseurs of fine dining from all around the galaxy to partake in endless feasts of culinary delight.

But when the Catastrophe struck, the mighty machines that generated food for thousands of denizens and guests alike fell silent. Worse still, when the dust settled and the survivors found themselves cut off from the rest of humanity, they found the machines had decayed to such a state as to leave them with no means of producing viable nutrition.

Thousands succumbed to starvation in the first years, their bodies littering the streets. The rest of Moissan’s grim history fell into darkness. Nobody truly knows what happened in the decades that followed until humanity began collecting its scattered remains and Moissan rejoined the fold.

Recently, there have been reports of the station’s dead disappearing. Bodies plucked from the morgue before they have had a chance to be cremated, clinics losing the deceased hours after they have passed, and similarly ghoulish tales. The unifying theory so far is that the dead are being eaten! Such an activity is, of course, considered criminal, but investigations have thus far been unable to yield any clues. All manner of grizzly hypotheses have begun to surface, though none have been corroborated.

Some claim that a cult of corpse eaters has sprung up out of the hunger-ridden darkness of Moissan’s recent past. There are also more grounded theories stating this, as many of humanity’s darkest acts, involves greed and profit more than anything else. There are even those who defend the  activity, stating that there exists on the station a secret sub-culture of honoring one’s loved ones by consuming their flesh.

Clearly, the truth of the matter will only be reached with a more thorough and in-depth investigation than is currently being provided by local authorities. No doubt such an investigation will yield facts that delve into far more than just circumstance, touching upon the darker aspects of the human psyche when faced with need and desperation!

Let it be said here that those who live their lives where life hangs by less than a thread understand the dreadful algebra of necessity, which has no mercy.