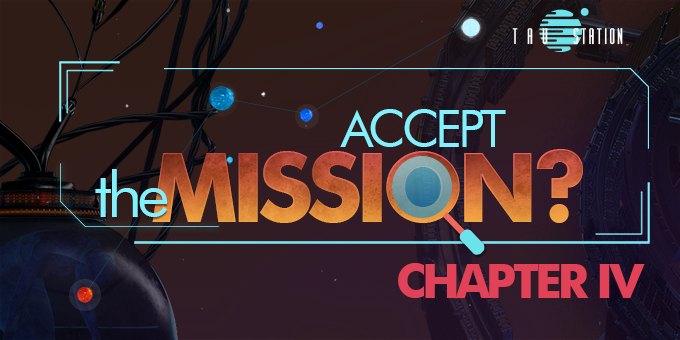 “The engineers of the future will be poets.” –Terence McKenna

We love a story…this is the type of statement we could enter were we vying for understatement of the galaxy. Our ongoing mission, that we wholeheartedly chose to accept, was to fill the universe of Tau Station with endless narratives and engaging adventures! To that end, we bring you another segment of Mission Dispatches to tease some upcoming, incoming, tales!

Eat your Heart Out

We often love to explore the contradictions and/or duality that often accompany many aspects of human nature. In a mission heavily inspired by Robert Heinlein’s Stranger in a Strange Land, noble sacrifice, macabre necessity, and the perceptions of social norm are all tested. These seemingly unconnected aspects come together to explore a cultural idiosyncrasy of Moissan Station.

Security on the station seem increasingly frustrated by local unwillingness to help investigate the latest in a string of unexplained disappearances. Pressure mounts to a boiling point as rumors of a cult of cannibals leaves law enforcement quite concerned.

Heinlein Stronghold has been suffering increasingly more dangerous technological faults. After witnessing a Citizen get accidentally floated, you may decide to dig a little deeper.

A council of Scientist Schismatics is attempting to solve the problem via committee, some solutions are more far fetched, and perhaps deadly, than others!

When the Walls (of Communication) Fell

Strange things can sometimes occur when groups of humanity spend a chunk of time apart and then come back together. On occasion, these occurrences can also provide no small amount of entertainment!

The station of Le Guin Stronghold out in the Ross 154 System is one such case. Here, the station has been the source of some contention between the Consortium and Gaule Protectorate, who both vye for its membership.

During the dark days following the Catastrophe, Le Guin, for a number of reasons, seemed to develop a rather unique and mystifying, if quite poetic and eloquent, dialect.

Confusion and accidental offence leads to a number of potentially hazardous situations as you try to help delegates try and understand each other.

We’re not the only ones, as it turns out, who love a story! Citizen Omni-Chronicles, thanks to the wonders of Omni-Reality Technology, allow you to witness and relive past events that have been constructed using a blend of found footage, Citizen bio-metrics, and offered memories. In this case an event that occurred on The House of Syria sometime shortly following the Catastrophe has been fabricated by Volunteer Omni-Architect, Xierumeng.

A mysterious and sudden explosion rocks the market area, leaving Citizens hurt, confused, and wondering if a second Catastrophe is looming unseen, floating in the Black! Relive this iconic event in The House of Syria’s history and perhaps glean some understanding about local Citizen’s collective emotions and motivations.