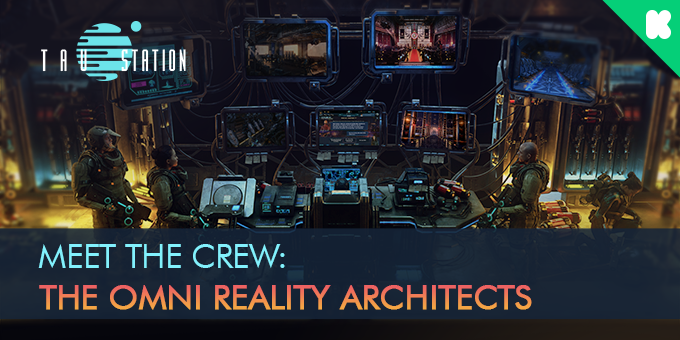 In our new series “Meet the Crew,” we’d very much like to proudly introduce you to the teams behind Tau Station. Let’s begin with our narrative team, also known as the Omni-Reality Architects of Tau Station.

Our talented authors are responsible for the manifold missions, side jobs, and career tasks that you can play.  Tau Station’s galaxy has been created and expanded by a number of very talented individuals from the present team as well as writers who honored us with their work and have since moved on. The beauty and ingenuity of each creative mind is molded into the universe and informs everyone’s ongoing creations going forward. As we write the future, we always take into account the past!

There is, however, even more to what they craft: the narrative team brings life to stations by creating all the NPCs with their individual background stories as well as the area descriptions and every station’s individual cultural background. All these important aspects reflect the diversity within Tau Station and come with a lot of heart from this team! 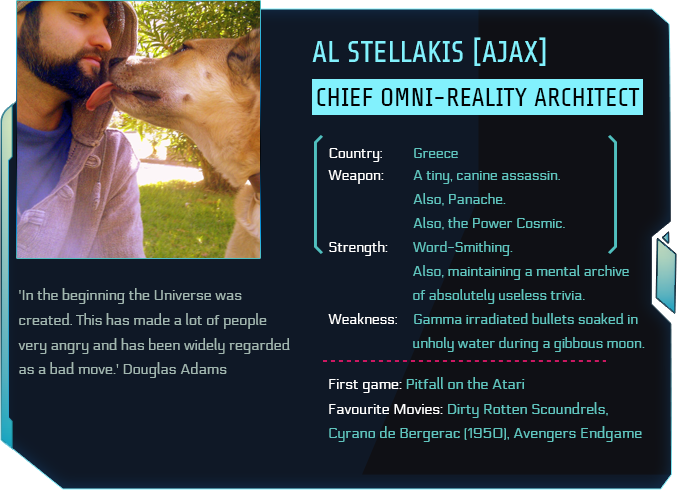 Al Stellakis’ nick is Ajax, he’s our Chief Omni-Reality Architect (narrative team) from Greece. His weapons are a tiny canine assassin and Panache. Also, the Power Cosmic. His  strength is word-smithing. Also, maintaining a mental archive of absolutely useless trivia. His weakness is gamma-irradiated bullets soaked in unholy water during a gibbous moon. His first game was Pitfall on the Atari and his favorite movies are Dirty Rotten Scoundrels, Cyrano de Bergerac (1950), Avengers Endgame.

“In the beginning the Universe was created. This has made a lot of people very angry and has been widely regarded as a bad move.”—Douglas Adams

The Damsel in the Dark—Moissan Station

A woman is trying to uncover what appears to be an organization of serial killers known as the Smiling Gentry. She has set herself up as bait and is being stalked by one of them. Can you unravel a digital trail of breadcrumbs she has left behind in order to help her expose the killer?

An ancient and apparently unmanned vessel has arrived at Sol Jump Gate. Various factions demand ownership when the ship suddenly comes to life and demands you, and only you, enter to defuse the self-destruct protocol it has just initiated!

Send in the Clones—Caen Stronghold

Two witless and, perhaps somewhat familiar, technicians argue over a series of repairs. You discover that one of the two has been cloned over and over again, and yet has no knowledge of this. A room full of grizzly corpses of himself attests to it! You will need to follow a dark and comical trail to unravel this macabre mystery. 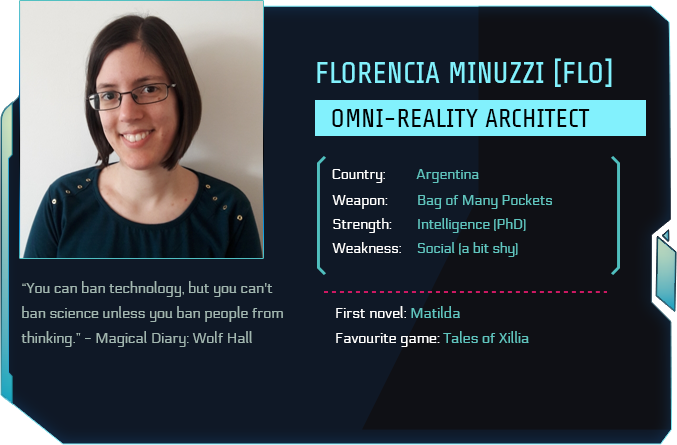 Florencia Minuzzi’s nick is Flo, she’s an Omni-Reality Architect from Argentina. Her armor is a bag of Many Pockets, her strength is Intelligence (PhD), while her weakness is Social (a bit shy). Her first novel was Matilda and her favorite game is Tales of Xillia.

“You can ban technology, but you can’t ban science unless you ban people from thinking.”—Magical Diary: Wolf Hall

Cur8, an android career adviser, requires human help to figure out why the Benevolent Dynamics algorithm keeps suggesting careers people don’t enjoy. At the core is a suspicious connection to Spirit of Tianjin, known for patrons with an abundance of credits.

A series of murders framed as grotesque art pieces will take the player and their sleuthing partner Qui9 around Spirit of Tianjin. Question suspicious patrons, check recordings and gather clues—but know the murderer may also be keeping an eye on you.

A group of researchers in the top-secret Consortium facility of Cape Verde are planning a conference after-party. Between finding them tasty snacks and dance music to liven things up, you might bump into people using the conference for more than the exchange of scientific ideas… 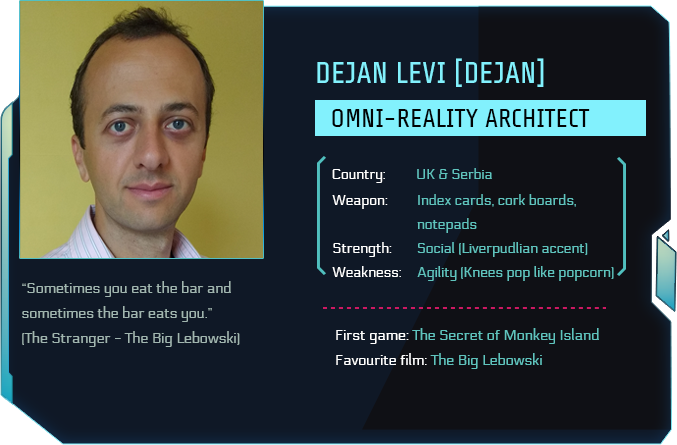 Dejan Levi’s nick is Dejan, he’s an Omni-Reality Architect from UK & Serbia. His weapons are index cards, cork boards, notepads. His  strength is Social (Liverpudlian accent) while his weakness is Agility (Knees pop like popcorn). His first game was The Secret on Monkey Island and his favorite film is The Big Lebowski.

“Sometimes you eat the bar and sometimes the bar eats you.”—The Stranger, The Big Lebowski

Trade talks between the two great powers are undermined by rumors of a compromising data leak, threatening to reopen old wounds in Barnard’s Star system. Can you get your hands on the data before it becomes public? You’ll meet freebooter data thieves, Consortium secret agents, and a fiercely independent journalist along the way.

A once-revered Tanegashima fleet admiral languishes in a brig cell on a treason charge. She counts off the days until her capital sentence, troubled by one lingering question about her past. Can you help find the answer before her time runs out?

A Difficult Anniversary—The Maid of Orleans

In a divided system still reeling from the Catastrophe, commemorating the past isn’t easy. But a gutsy local official is determined to build unity with a special event. Can you help her reconcile the stations’ few remaining Catastrophe survivors for this unique occasion?