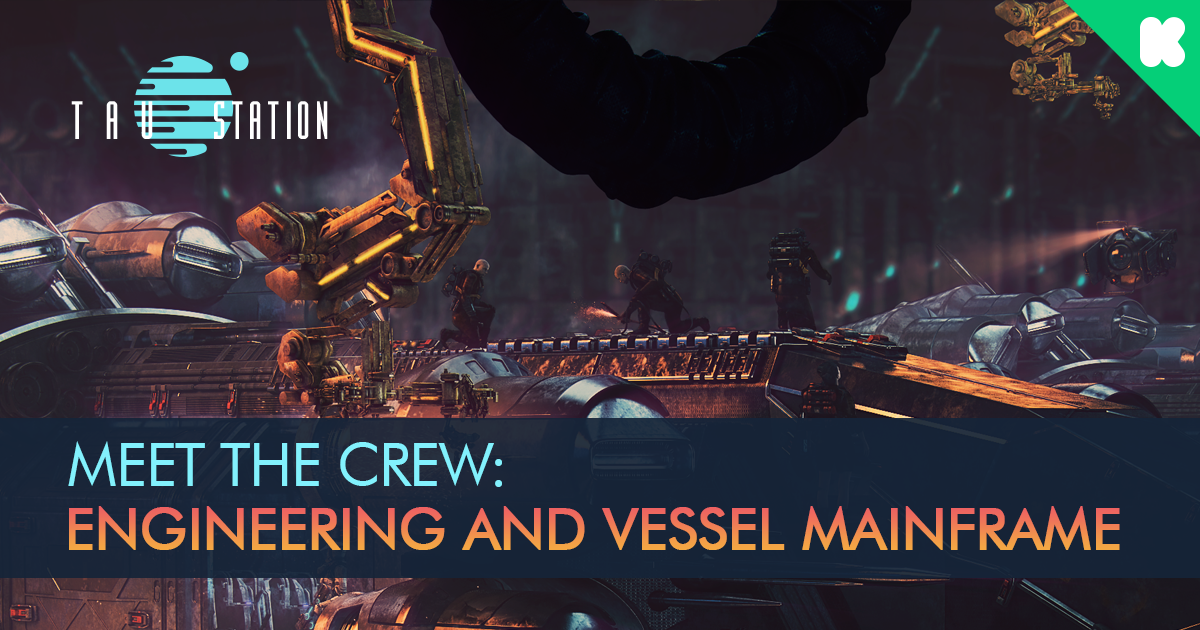 Welcome to the second episode of our “Meet the Crew” series, introducing you to the teams behind our beloved scifi indie game Tau Station. Today, you’ll meet our technical team, responsible for Engineering (back-end) and Vessel Mainfraime (front-end).

While the Tales of Tau Station may be core to our experience, let’s be honest, you can’t keep anything flying without an engineer! A certain Firefly class ship would have been a-grounded long past, as would have the Enterprise, Death Star, and countless other space-faring vessels without a hearty crew of engineers and mainframe experts!

So too, does Tau Station stay in orbit by the loving care of our engineers and vessel mainframe crew! 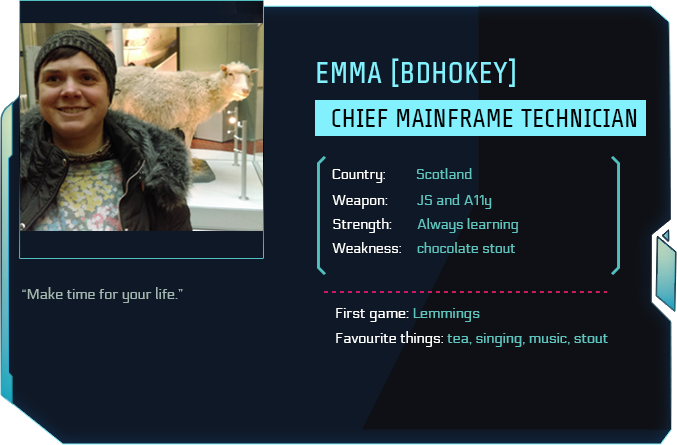 Emma’s nick is bdhokey, she’s our Chief Mainframe Technician (front-end),  living in Scotland. Her weapons are JS and A11y, her strength is “always learning” while her weakness is chocolate stout. Her first game was Lemmings and her favorite things are tea, singing, music, stout.

Make time for your life Emma

I want to share two sources that I think are helpful for people starting out in development and testing for web accessibility. 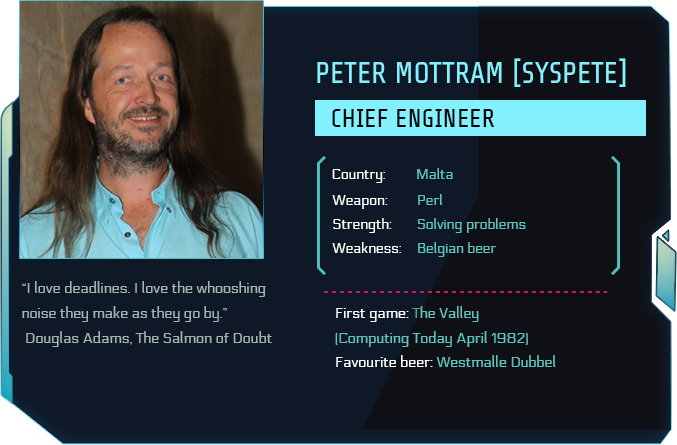 Peter Mottram’s nick is SysPete, he’s our Chief Engineer (back-end) from Malta. His weapon is Perl, his strength is “solving problems” while his weakness is Belgian beer. His first game was The Valley (Computing Today April 1982) and his favorite beer is Westmalle Dubbel.

“I love deadlines. I love the whooshing noise they make as they go by.” Douglas Adams, The Salmon of Doubt

This is not really what I wanted to show as an example, but the things I’m most happy with are just way too big to show any code snippets.

Our players are clever, and like to find ways to get more than we expected when they perform an action. They find interesting ways to multiclick, or do fast page refreshes, instead of waiting for the page to complete loading and then clicking the next action. We can use JavaScript to try to paper over issues like this, but such mitigations are easily circumvented client-side, so we created our one-time URL “nonce” system.

When a nonce is attached to a URL then any second, or subsequent click, is simply ignored by the game. We use a Catalyst ActionRole along with a simple helper to add the nonce and verify it. So, instead of a URL like:

we now have a URL with the nonce appended:

Nonce checking is handled by the ActionRole, so inside a controller we simply add attributes to the action sub:

A simpler controller action might not need an action-specific nonce, or a custom action on fail, making the action really simple: 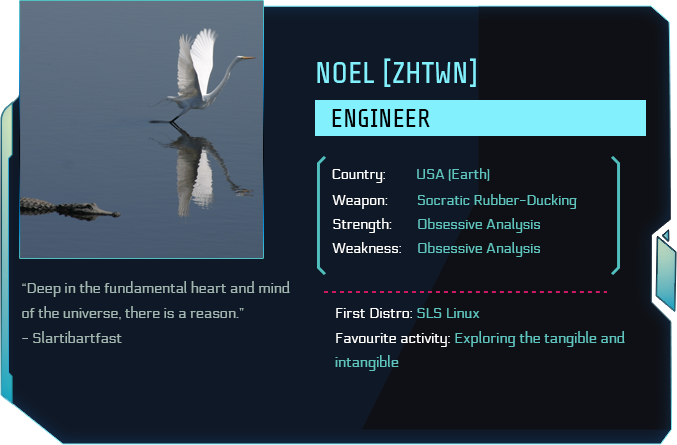 “Deep in the fundamental heart and mind of the universe, there is a reason.” Slartibartfast

One of the bits of Tau Station code that I’m most proud of is actually the YAML that we use to configure our shared DBIC Row cache (and of course, the actual code that implements this cache). The Station cache is configured
like this:

which allows us to use any of the following accessors, doing no more
than one database query per accessor, and never retrieving a given
Station from the database more than once: 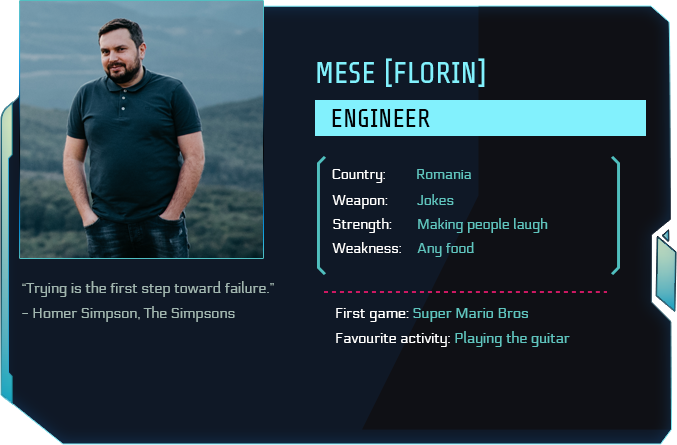 Florin’s nick is MeSe, he’s one of our Engineers (back-end) from Romania. His weapon are Jokes, his strength is “making people laugh” while his weakness is “any food”. His first game was Super Mario Bros and his favorite activity is playing guitar.

“Trying is the first step toward failure.” Homer Simpson, The Simpsons

One part of the code that I like is the query that decides which of a character’s bodyguards steps in a fight next.

We have four types of bodyguards:

First we see which of the character’s bodyguards are available (not already involved in a fight or currently recovering in Sickbay due to a fight) on the current station. We sub-query then by bodyguard qualities.
We consider the sentinels the most useful in a fight, due to their capability to extract the character from a conflict area. Then we also need to consider bodyguard rank, so that we provide the most powerful ones with priority. 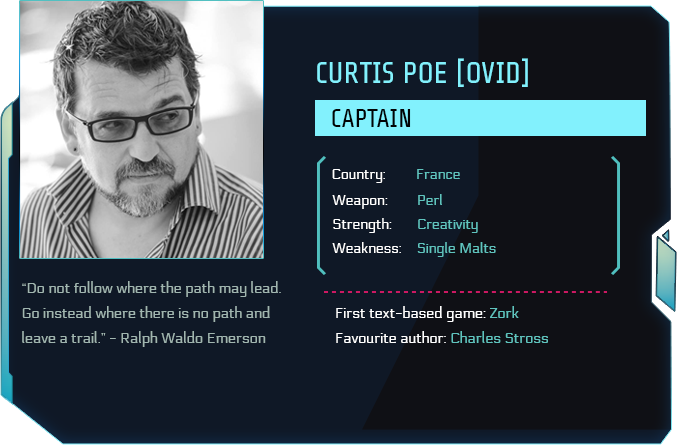 Curtis Poe’s nick is ovid, he’s the Captain of Tau Station in France while being an Engineer (back-end). His weapon is Perl, his strength is creativity while his weakness is “Single Malts”. His first text-based game was Zork and his favorite author is Charles Stross.

Do not follow where the path may lead. Go instead where there is no path and leave a trail.” Ralph Waldo Emerson

My favorite piece of code is our partial classes. This was a technique we adopted early on when it became clear that your character could do many, many things and the “single-responsibility” guideline for class design actually turned out to be a hindrance. But packing too much responsibility into a class can result in “god objects” which do too much and are hard to maintain.

Instead, we compose some classes out of multiple “partial classes”, each of which has a single responsibility. It’s made our code both easier to read and easier to maintain.

I was trying to do the right thing and follow the “single responsibility” principle so that each class had one and only one responsibility. Thus, my Mission class might handle all mission-related behavior and I had code like this:

But even though I wrote that code, I could never remember if Alice had a mission for Bob or vice versa. I had to look it up every time and that’s a hallmark of fragile code.

The reason it was fragile is because in linguistics, that’s a verb-subject-object (VSO) structure. However, in English, we almost always use subject-verb-object (SVO), and the VSO structure is very confusing to us.

What I wanted to write was:

That’s SVO and it’s no longer ambiguous. Thus, our code becomes easier to
read. I decided I wanted to use SVO everywhere in the code base to avoid these problems.

I thought about this for while and considered partial classes. There are several ways of implementing them, though today, the C# implementation is probably the best-known. With partial classes, you create several classes which can be composed into a single class, but each partial class has a single responsibility. In Tau Station, we use Moose for our object-oriented code and Moose provides roles, which gives us the ability to separate class responsibility and class behavior. Thus, our Character class could be implemented with the following pseudo-code:

While some might argue that TauStation::Character is still a “god object”, we’ve been using this approach for years and it’s turned out to be very maintainable and allows us to use the intuitive SVO structure for our method calls.