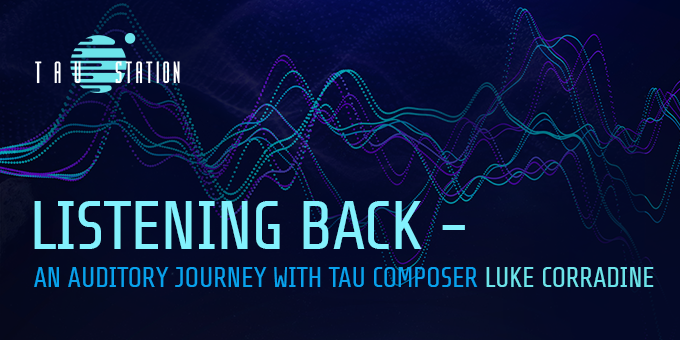 Come along Citizens, as we explore Tau Station, eyes closed, as Luke takes us through the process of, as he puts it, “caccooning the game with sound”.

Luke Corradine is no stranger to crafting the music that veils new worlds in sound. He is a multi-instrumentalist who has been composing music for film for over two decades, but Tau Station has been a unique, creative endeavor.

Luke began his Tau journey over five years ago.

“A feature of this relationship,” he recalls, “is the immense sense of friendship I feel with its creators. We’ve gone through hard times.” Of the game itself Luke knew very little -he knew the people behind the game, the heart behind the idea.

“This team and the director’s vision is profoundly unique. Their goals and modus operandi is extremely personal and hence, everything that comes out of it, has a distinctive style, and a trade mark of its own.”

Luke has matched this spirit in Tau’s music -the atmosphere is immersive, deep and connected.

“I’ve never been into games,” he confides, “I’m into film, but Tau Station isn’t just a game. It has scope and depth.”

Listening to Corradine’s compositions for Tau Station one can immediately tell that the process is personal, close to his heart. He did not want the world’s “unique sonic trademark” influenced or as he put it, “polluted” by previous works of his. The process, which involved rearranging his workspace from scratch -“you must destroy,” he tells me “before you can create” began with the keyboard for the science fiction universe, from “palettes of sounds to chords”.

The science fiction genre has always attracted the composer. Vangelis’ score for “Bladerunner” and Goldsmith’s eerie aura for “Alien” are some of his favorite compositions. For Luke science fiction is about “atmosphere’, and a certain sense of coziness” he tells me, “You somehow feel at home in a sci-fi work. This sense of warmth and wonder, of excitement and astonishment, are all emotional targets I want to hit right from the start.”

He feels at home with Tau Station -feels a part of it, and hopes to continue to grow with the universe he is helping craft. It is a challenging world to design. Unlike a predefined script for film -an industry in which directors are less and less likely to take musical risks- Tau’s universe is ever expanding.

“It has incredible literary depth and width. It is a work that requires a strong thematic core. Requires a huge amount of music. A huge amount of work was composed before we hit gold, perhaps as much as 20 or 25 hours of music.”

His responsibilities go beyond standard composition. Luke is responsible for bringing the auditory feel to the visual. He gives the action its voice. Sound design takes place in the realm of what is visible and what can be experienced through an action. “This includes weapon sounds; what it sounds like to spend money on training, on learning, etc… Actions are represented by a palette of sounds. I create those palettes.”

For the score itself he has high standards: “I aspire to improve on fluidity, composing pieces that are in perfect tune with one another, and gently entwined with each other via harmonic themes and thematic treatment”.

This is in the works and his “palette” of compositions is beginning to expand, and he sees the process of creation happening at a faster pace.

The man’s voice is warm and confident. One does not need to see his face to see that he is smiling when he tells me that, “Listening back, it’s incredible how much has gone into this world, how pleasant it has been swimming the musical waves of Tau.”

For your part, cherished Citizen, you will need to wait just a little while longer -till February of a new Earth year- to swim in those waves yourself. But to satiate your auditory appetite, here are two snippets of Luke’s wonder.