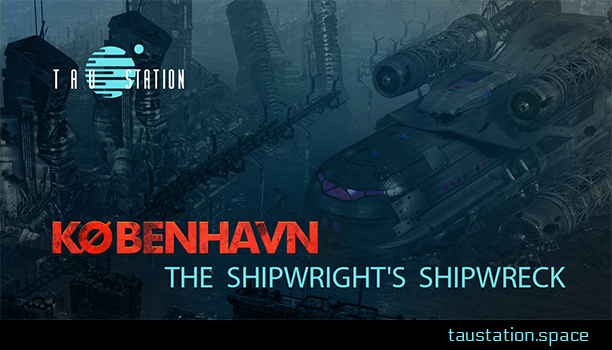 København, once a beacon of industry, a station of shipwrights and world class engineers known far and wide as the very best in the building of spacefaring vessels.  Now, after the Catastrophe, this station is a husk of its former self. When the Catastrophe struck here, it struck hard. Hundreds of gargantuan ships moored above the station, some for repairs, others being built outright, came slowly but inexorably crashing down upon the luckless denizens below. Cruiseliners, built to ferry thousands of passengers across the solar system disintegrated entire city blocks, other buildings exploded into fiery balls of deadly plasma as fuel tanks ignited or dangerous payloads caught a spark. In the aftermath, København’s people crawled out of the wreckage and, those that did, marvelled at their survival.

Today, the station is a wrecked shell of its former self with giant skeletons of once space-faring vessels crouching over entire city blocks like hungry gods.  Yet it is also a testament to resilience, to the indomitable spirit of its inhabitants. Rather than give up, the people of København have learnt to adapt to their situation, and even more to try and reclaim their former glory.

Many ships have been converted into buildings, their now empty hulls serving as walls and ceilings.  Brave scavengers known as Wreck Runners have been especially trained to navigate the dangers and ancient security systems of dead vessels, hoping to find resources and slowly clean up the graveyard known as, “The Wreckage.”

While much of the knowledge of shipbuilding has been lost, many people have come together to try and piece together what information there is and fill in the gaps with their own ingenuity. And slowly, the shipyards of the station have begun manufacturing vessels again, with corporations like Chamberlain setting up shop in the scrappy station, struggling to emerge like an ugly phoenix hatchling from the ashes of its previous life.