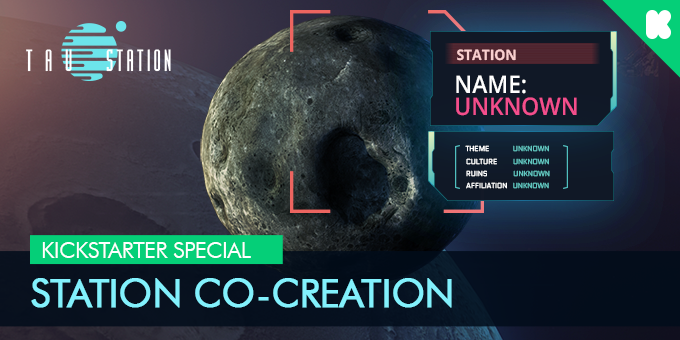 Stations have many layers to them – their areas and the characters that inhabit them, the missions and jobs you can carry out, as well as their history and connections to their neighbors. If you back us on the Station Designer tier on Kickstarter, we’ll work together with you to create a station in its entirety. Bring your ideas to life and create your own slice of space that all Citizens will be able to explore!

The Kickstarter Reward in a Nutshell

Working with the Tau Station team, you’ll co-create as many facets of a station as you want. If you’re not interested in designing the Inn, for example, we will create something that matches your vision for the station – equally, if you want to plan out every detail of a heist, we’ll transform that into an in-game mission! Since there is so much to this co-creation tier, it will happen over various waves, working closely with the narrative team to make sure all levels of the station work together well. The process itself will go something like this:

The Station: We’ll start by figuring out the broad strokes of the station. Is it inspired by a real-world city you love, the pursuit of culinary extravagance, the idea that love conquers all? We’ll give you a document full of the kinds of questions we ask ourselves when we make a station, and based on your answers, we’ll construct a two-page pitch of your new station. This is to make sure it fits with nearby stations you may not know about, and our broader story plans. Once you’ve looked over the document, we’ll have a chat to see how you feel about it, and make any changes necessary.

The Missions: We’ll send you a document full of thought-provoking questions to get your ideas down, then we’ll work together to bring them to life! If you want to learn more about the mission-making process, have a look at our Mission Co-Creation post. The station co-creation includes up to 4 instances of mission co-creation, so you can fill your station with the kinds of stories you want to see, including making sequels or having an exciting overarching narrative!

The Side Jobs: These work similarly to missions – you give us your ideas, we plan, you approve, we write, you test. By this point we will have a good idea of the station and what goes on there, so it’s likely the side jobs will rise organically by this point. Side jobs involve NPCs and areas, so this is another chance to fill out corners of the station we might not have used much until this point.

Final Tests and Call: At this point, we’ll finalize the NPCs and area descriptions, making sure we have everything covered, and everything is working well together. You’ll have another chance to test the station and talk to us about it – once it’s to your liking, our co-creation will be complete! (Remember that if you would like to playtest, you will be asked to sign an NDA.)

Each new system and its corresponding stations requires a lot of work, even before it’s populated by characters, missions and side jobs. Systems are a team effort, making sure they work on every level, while Stations are usually spearheaded by an individual writer. There are many questions to ask, so we work with each other to make sure we’re on the right track. Where will the core story be at this point? Will our Citizens need a breather from politics? Are there important secrets or information we need to reveal?

The station is arranged in concentric circles. The center, mainly essential services and housing, is laid out in an organized fashion. The middle circle contains more ‘frivolous’ things, like bars, gyms and markets, which were added once miners started living here. The outermost circle contains blue-green algae farms, which supply oxygen and food. The space between algae farms is free for anyone to use, and has been taken up by random facilities – oddly shaped skate parks, artistic renditions of extinct species, sensory deprivation spas, etc – all added hodge-podge as Freebooters made them.

Writing starts with whichever text processing software we’re most comfortable with – jotting down ideas, back story, history, culture, structure, and everything that is important to know about a station. Everyone else in the narrative team will help refine ideas, bring up any conflicts they can see, or suggest other directions and connections which will help the station stand out.

A station is in many ways the sum of its areas. Once we know what a station is like at its core, what it’s all about, we set out to create it piece by piece. As with missions, Tau Station’s system makes it very easy to add and edit text, and see it reflected in the game. We define local names for each area – say, what the Inn in this specific station is called – and get to work on the description. We have a separate server for narrative testing, so we get to play with all the new features and make sure they work before we share it with all of our Citizens. 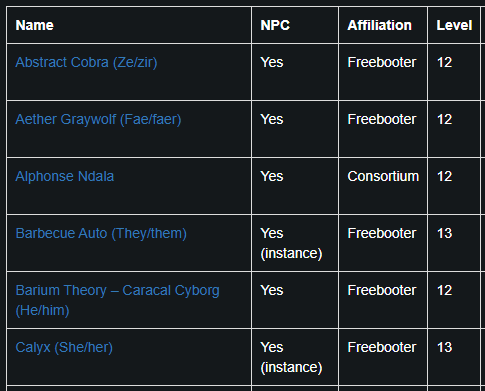 While some missions involve creating new NPCs, most are made alongside the station. They start out malleable, but having characters populating a station helps give a sense of the space. We also often create NPCs in a position where they would give Side Jobs – we want these repeatable stories to feel grounded in at least one character who assigns them to you. In order to keep track of our myriad characters, the system lets us call up lists of NPCs per area and lists various details about them, such as their level, location and affiliation.

The Tau knowledgeable among you may have noticed that the screenshots in this blog post feature areas and characters not featured in the game yet… something to look forward to, and something to inspire you, if you want to choose the Station Designer tier on Kickstarter! Come create a Station together with us!