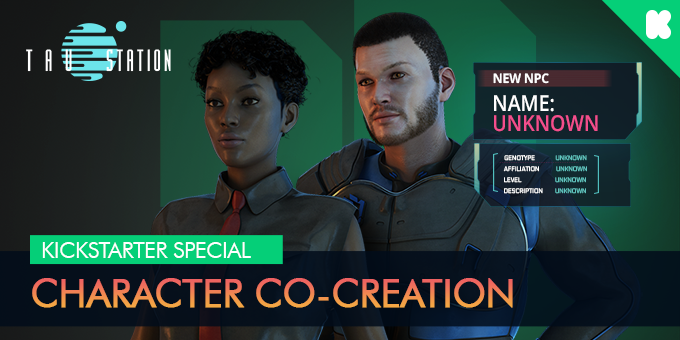 Just as people are the heart of the world, NPCs are the heart of Tau Station! If you back us on the “Character Designer” tier on Kickstarter, we’ll work together to create a denizen of the Tau Station universe, with the appearance, personality and mannerisms of your choice. Bring your ideas to life and create a character who will be immortalised in our universe!

If you enjoy reading character descriptions in Tau Station, you’ll know that their descriptions aren’t prescriptive. Sometimes the characters physical traits will be the focus, other times you’ll read about their mannerisms, voice, or the actions they’re taking as they go about their business. And while not all characters have avatars, the ones you co-create will! The process will go something like this:

Your Ideas: You can send us your ideas for a character, or we can give you a document with relevant questions you can use as a springboard. From their looks to their level of friendliness, let us know what you’re picturing!

Our Writing and Art: We’ll go through what you’ve given us and create a character description and avatar that works in the Tau Station universe, assigning them an area (in a current or future station).

Last Call: Once you see what we create, we’ll have a call and you can tell us what you think, and if there’s anything you want to change. When everyone’s happy with the outcome, the NPC will be ready!

Aside from some distribution balancing, writers have a lot of free reign when it comes to characters. There are certain Tau conventions – François Cornuché is likely a Gaule name, Cloister Vindaloo probably a Freebooter – the details are all up to us. As with most good writing, everything should serve multiple functions at the same time, and this is no exception. Ideally a character description will not only help you paint a picture of the character, but also further your understanding of the Tau universe, and maybe even make you laugh! If they feature in a mission or side job, their description will also form a part of that story in one way or another. 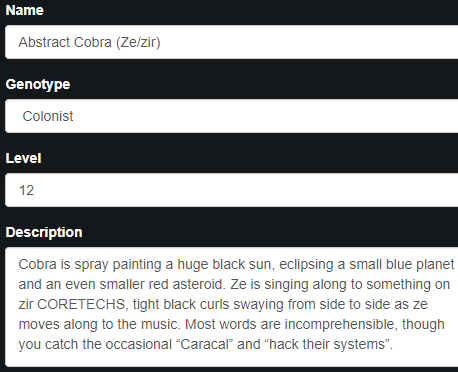 In practical terms, creating characters is as easy as filling out text boxes with their information, which lets us focus on the writing itself. After all, words are the backbone of Tau Station! If creating a character sounds interesting, have a look at the Character Designer tier on Kickstarter. You might enjoy having a go at creating your own, memorable character!