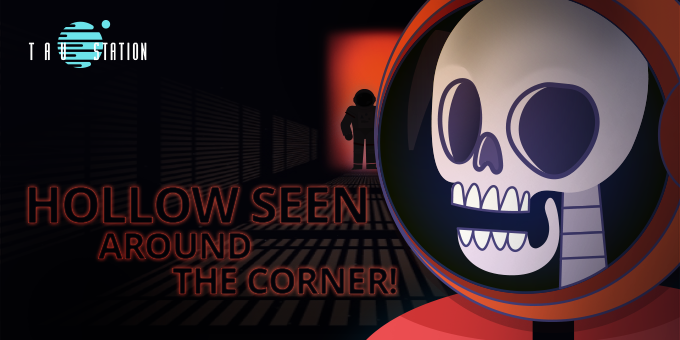 “Hollow Seen around the corner!”

The cry filters down the hallway from just ahead and is immediately followed by the sounds of a number of people, young and old, screaming and running. Dim lighting casts strange and jagged shadows as the echo of…something…follows them, reverberating round the bend in the dark corridor ahead.

The chaotic cacophony predicts the visual of a panicked throng rounding the corner and sprinting, pell-mell in your direction! It is only as they get closer that you can make out squealing delight mixed in with the exhilarated screams of playful fear.

“Hollow Seen!” Somebody yells again to the accompaniment of peals of laughter as they run past you.

There are certain times of a cycle which hold special significance to humanity, even though we may no longer remember why.

“Much that once was is lost, for none now live who remember it.”

Collective memories of celebrations past, even sounds that approximate a particular name or concept, filter through time and experience.

Every three cycles or so comes the festival of Hollow Seen! None remember now its origins, only that around this time humanity embraces and takes joy in fear!

We scare the children with stories of the Hollow, haunted and empty space or hazmat suits that lumber around trying to catch and eat you, forcing you to wear them! We stare into the shadows, out into the Black, and for one tenspan we proclaim, “Scare me, go ahead! I will revel in the thrill of it!”

Fear is, we tell ourselves, the mind killer.

Young and old alike delight in games of escape from artificially animated suits, driven by bot or drone that haunt the corridors of the stations throughout this holiday. For the especially brave, reaching inside their gaping, flesh-less helmets may yield a sugary treat!

As with most special times of the year, such celebrations last at least a tenspan and are always known to inspire a tale or two! Watch for a new and Hollow Seen inspired Chronicle landing next week!