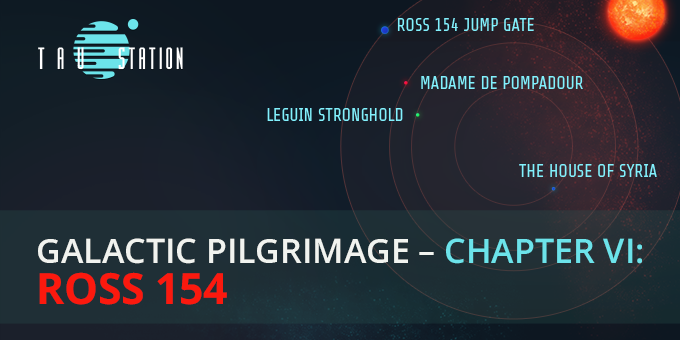 This tenspan we take our galactic pilgrimage towards the farther flung and uniquely amalgamated system of Ross 154. The collection of stations that orbit this lone Red Dwarf took a lot longer to bring back into the fold, resulting in a number of unique cultural idiosyncrasies forming around their societies.

Gateway to the system, the jump gate of Ross 154 sees itself as the protector of the stations herein. The military here chose to double down on their own presence before beginning any repairs on the gate itself post Catastrophe, being unsure of what they may encounter once functionality was restored.

Military traditions, married to omni-reality tech from the nearby House of Syria, evolved into one of the most advanced war-games institutions in the galaxy. Today, a cyclical occurrence on the patron station of the artistry of war, the war-games draw in competitors of every ilk and allegiance.

For a number of reasons, including the need for a decade of cycles wearing gas masks that hid features, among other things, the language of Leguin has evolved in a unique direction. Emphasizing both the need to vocalize clear intent as well as avoiding direct phrases that could affect the local belief in ‘Balance above all’, the local dialect is often difficult to grasp. Visitors to the unique, ‘Stanford Torus’ shaped independent facility will agree that it feels very much like the patron station of perfectly balanced balderdash.

The luxuriously meandering canals of Madame de Pompadour are a picturesque but grim reminder of the flooding that claimed so many lives during the Catastrophe. The intense focus on cultural supremacy that is encouraged towards citizens in an almost understandable reaction to wanting to put such horrors behind. Madam de Pompadour, the patron station of forging above and beyond, will always go out of its way to dazzle visitors with its ability to not only survive, but thrive.

The House of Syria – Virtual escapism

There are two separate stations that exist in parallel on the House of Syria. Extremely advanced omni-reality technology allowed a flourishing digital haven to exist behind the stark regocrete of this station. Digitally, this facility is a veritable cacophony of color and sound with brilliantly creative environments stretching far and wide.

Taking the jump gate’s wargames and elevating them to the next level, the House of Syria hosts a regular OmReAthletics tournament set within virtual reality. Coupled with this, tourists from far and wide travel to the patron station of better than life to experience a whole host of virtual holiday scenarios.