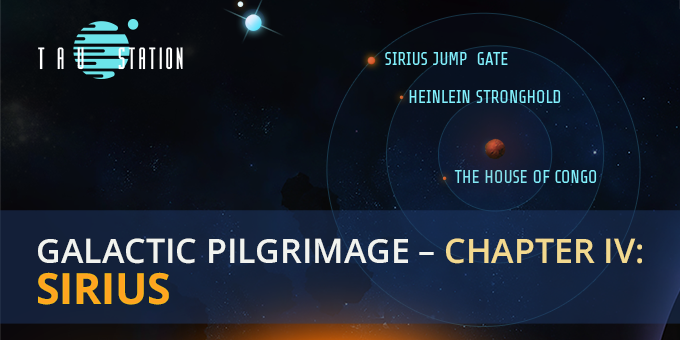 Not only is playtime decidedly over, but the adults have been expelled from the playground and the children have formed tribes and fashioned crude weapons! Welcome to the Sirius System, Chapter IV of our Galactic Pilgrimage. Here in, as the locals have designated, the Apples of Discord, Freebooting is the name of the game. Law takes a back seat to a hedonism and anarchy that maintains its status-quo by threat of mutually assured destruction.

Sirius Jump Gate – The gate of Pandemonium is a revolving door.

The entrance and exit to the Apples of Discord is one oiled by smugness and the imminent threat of violence. Heavily armored Freebooters lounge around the station, taking great delight in the discomfort they bring to Gaule and Consortium travelers (heavily) paying for the right to pass through a system that is a strategic hub in its galactic position.

The atmosphere here on the Sirius Jump Gate, patron station of opportunity, leaves no doubt that you are entering a system belonging entirely to a Freebooter collective.

The Scientist Schismatics who run this station are a group of researchers and inventors who have embraced the concept of unsanctioned science. Here, with the blessing of the Freebooter way of life, they can research and tinker with anything their hearts or minds desire, free from the confining yoke of regulation. The entire facility is a bedlam of whacky machinery and colorful devices. Of course, when the scientific mind is untethered by law and legislation, it can occasionally lead to rivalry; dangerous, explosive, and ingeniously deadly rivalry.

Welcome and watch your step on Heinlein Stronghold, the patron station of progress, no matter the cost.

The House of Congo – Be you, whoever that is.

When one first becomes a Freebooter, they are invited to change their name. This is in order to reinvent themselves in the essence they truly feel they are. Nowhere is this better exemplified than on the House of Congo, a station that celebrates diversity and individuality without exception. Every dwelling on this orbital facility stands out in its own unique way. Every color of the spectrum, every texture and weird facade can be seen as the eye gazes across any area here. It is the same with the local denizens, who revel in the culture of the unfettered, unrestricted self.

Here too reside the Caracals, a hacktivist collective that is responsible for the entire system maintaining its individuality. Here on the House of Congo, patron station of wearing your soul on your sleeve.