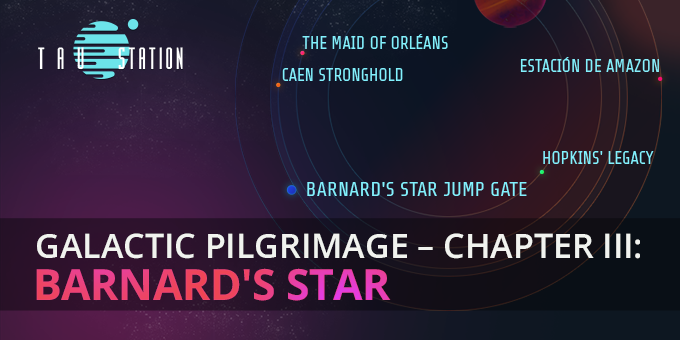 Our galactic pilgrimage turns to its third chapter, that of Barnard’s Star. Now, we have stepped off the comfort of our front porch, we are no longer even on the relative safety of the pavement. We have moved far from home, things are beginning to get hairy! The two largest members of our gang of humanity, the Consortium and Gaule, warily (and literally) orbit each other from a distance. They keep a narrow-eyed dance on the farthest edges of the system, circling Van de Kamp and sizing each other up. As a result of this, humanity’s first rebellious children in the form of one Freebooter and one Independent station maintain a bemused vigil closer to the center.

Far out from it’s comfort zone, the Consortium maintains control over this hulking entrance to a system that it finds perhaps less than hospitable. Smug Freebooter eyes watch from Caen Stronghold while the strong Gaulish Military presence around the Maid fosters an awkward tension for those on the gate. The Bakker inquest, did, at least, help to diffuse some of the simmering pressure throughout the system.

A station very much resurrected from the dead; its current populace is descended from those who found it devoid of living denizens and sporting a very large crater in the center exuding a fairly palpable tone of finality. Those that settled its empty halls after the Catastrophe and it patched its crumbling structures soon declared it a haven for any who found themselves trapped between stations. Folks arrived, contributed, survived.. Armaments were salvaged and attached to the exterior, transforming Caen Stronghold into a hedgehog of fierce self-reliance.

When the governments approached, post catastrophe, to rescue and reclaim, they were politely, firmly, and quite smugly told to smog off! Caen Stronghold is, after all, the patron station of violently enforced hedonism.

Hopkins’ Legacy was plunged into lawlessness, they did not come into it in gentle steps like on Caen. Thus here, the resulting independence was approached from the opposite direction. The Yasutsuna Corporation, whose Tanegashima Fleet was in the system, arrived to quell the panic and unrest and establish a modicum of order. Yasutsuna made Hopkins their HQ and politely rebuffed any suggestions that the station should rejoin the Consortium. Such rejections were made all the more possible by their popularity with the local populace as well as the none too subtle fleet in orbit around the station.

Hopkins’ Legacy is the patron station of corporate autonomy.

This plucky little station on the very farthest reaches of the system happily rejoined the Protectorate post -Catastrophe and brought with it a substantial gift. While the research is still ongoing, what is known is that somehow the station accidentally created an ecosystem, likely born of hydroponics and onboard farming left out of control. Estacion is currently the only known station with an actual weather system and flourishing biome. Understanding is pending.

The Maid of Orléans – Royally Militaristic

Once a destination of refinement and opulence for the rich and famous, the Maid is now a heavily fortified Gaulish presence for the system. The Gaulish military, ever the prudent-minded, have made a conscious effort to maintain a balance between the increased level of security and original luxury the station once offered. This, perhaps, creates a slight impression that Gaulish military are equating themselves with a higher echelon of society, but this is likely just a result of coincidental semantics…right?

Welcome to the Maid of Orléans, the patron station of regulated opulence.