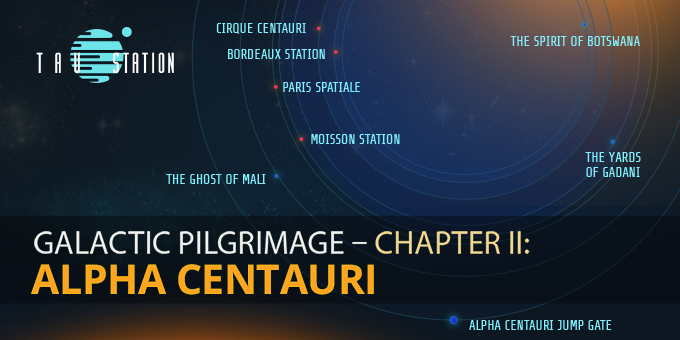 In Chapter II of our Galactic Pilgrimage, we take you through the system of Alpha Centauri, nearest neighbor of Sol and first port of call for many would be travelers beginning their journeys past our home system and to the vast galaxy beyond!

The first jump gate out of Sol, out of our home-nest, it is also one of the largest ever built. Alpha Centauri Jump Gate is the patron station of travelers, of setting that first foot outside the door into the great unknown.

The station itself often feels like it is barely held together, the sheer will of necessity binding its foundations and keeping them from drifting apart. Here, one can meet travelers from all corners of the galaxy, with all manner of agenda.

Bordeaux Station – Can you hear the people sing?

When the Gaule Protectorate first reclaimed this station, they found a people that had discovered they could survive the Catastrophe and govern themselves without the aid of the government. The Protectorate swooped in to rescue their wayward children, loudly welcoming  them back into the fold! So loudly, in fact, that they do not here the grumblings of dissent from the shadows.

Bordeaux, the patron station of passion, artistry, and the stirrings of revolution!

Moissan Station – The cycle of death and life.

Moissan Station was once a thriving location for galactic gastronomes. Behemoth food processing machines churned out exquisite works of edible art for thousands of salivating visitors. Then the machines died, and the people starved. Their mass graves soon invited forests of mold and mushroom, fungus and spore. Slowly, achingly, Moissan, the patron station of death and rebirth, of continuity and sacrifice, began to prosper once again.

By cultivating the forests of micelial product they saved not only themselves, but helped to provide a base nutrient for the first rations that would feed a post Catastrophe galaxy.

Spirit of Botswana – Water is thicker than blood.

On the Spirit of Botswana, residents stuck to doing what they did best even through the Catastrophe and thus, some would argue, kept humanity alive. Botswana was an ice mining station, and remained an ice mining station. Without ice, there could be no water. Without water, there could be no life. The Spirit of Botswana became the patron station of perseverance, of quenching the undying thirst.

Paris Spatial – The throne of the Protectorate.

Where Tau Station is the jewel of the Consortium, Paris Spatial is the pendant on the lapel of the uniform of the Gualish Protectorate. Very much the galactic capital of the Protectorate, Paris Spatiale is austere, often severe, stoic, and proud! Mighty fleets of Gaulish cruisers orbit the Patron station of stability and expansionism.

Cirque Centauri – In space, nobody can hear you laugh.

As we strove to survive the Catastrophe, we found ways to feed ourselves, to quench our thirst. We brought light and communication back to the Black, we found each other. On Cirque Centauri, we remembered how to laugh. Here, the gods of entertainment, sometimes humble, sometimes to excess, have been reborn. On Cirque Centauri, the patron station of laughter and indulgence.

The Ghost of Mali – Where space meets the land.

Sometimes, when technology fails you, when the machines largely fall silent, you get back to basics. On the Ghost of Mali, patron station of reaping what you sow, we went as far back as we realistically could, in order to hide from the present. Here, salt of the earth (so to speak) bioengineering and farmers toil on the hydroponics farms, raising genetically engineered behemoths of flora to help cultivate a simpler existence.

Yards of Gadani – Where ships come to die.

On Kobenhavn, ships were once born, when we knew how to craft them. On the Yards of Gadani, they came to die. The scrap-yards of Gadani are the final resting place of hundreds, if not thousands of once space-worthy vessels. Here, on the patron station of reclamation, do the enterprising come to loot the bodies of the chariots of the stars.