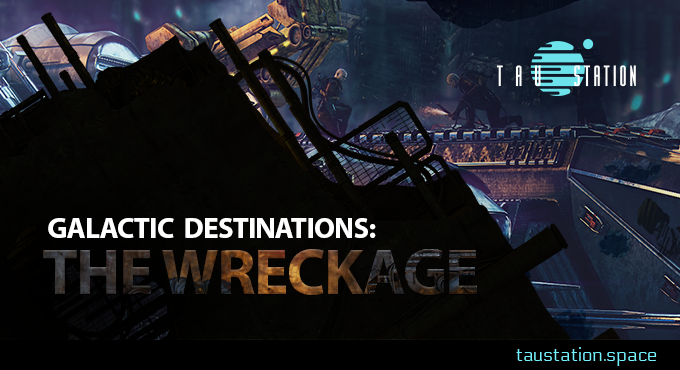 We fly ships we no longer know how to build, across stars we are charting all over again. Our knowledge of space travel and our ability to build space faring vessels are like two ships passing each other in the night. Thank the skies for København’s wreck runners, helping us reclaim this vital skill a bit at a time.

Welcome to the Wreckage! Our next Galactic Destination brings you to the broken city-scape of the ruins of København. Here, vast city blocks lie crushed beneath behemoth like vessels that once came crashing down onto the station when their moorings broke apart. The station wears this gigantic scar like a proud wound of war, a twisted reminder of what was lost, and what must be reclaimed. Read on below to learn more about this enigmatic destination.

When the Catastrophe struck, each station was affected in a different way, shaping their course and culture in the darkness of the years to come. København was the jewel of humanity’s ship building world. Here, the best and mightiest space-faring vessels were designed and constructed and the station’s shipwrights were the best in the galaxy. Tethered to the exterior of the station, were hundreds of vessels, each in various states of repair or construction. Shipwrights and engineers could be seen working on these throughout the day and night, their personal lights blinking to and fro like luminescent parasites on the back of a drifting behemoth.

On the day of the Catastrophe the moorings that held the gigantic vessels berthed on the exterior failed. The ships, untethered, drifted free. In the resulting collisions, many came crashing down towards the station. Thousands died that day, crushed or burned in the inevitable flames that followed.

The Wreckage is the memory of this day. The broken cityscape is littered with the corpses of these once magnificent vessels that were København’s heritage. Entire city blocks buried beneath silent and broken behemoths. Ruined skyscrapers with smaller ships jutting out of the section they crashed into.

Wreck runners are a special breed of scavenger who have been born out of humanity’s need and København’s special circumstance. Buried beneath the silent ship cemetery of the Wreckage lie secrets of ship crafting that are now lost to us. Wreck runners have adapted to scavenging the vessels that lie throughout this vast area, bypassing long forgotten security systems and surviving the many hazards that a dying space ship can present. Their self appointed task is to collect knowledge and scavenge resources to try and help København’s shipwrights reclaim the lost skill of crafting a space worthy vessel.

Leave the men where they lay
They’ll never see another day
Lost my soul, lost my dream
You can’t take the sky from me.

I feel the black reaching out
I hear its song without a doubt
I still hear and I still see
That you can’t take the sky from me.

The Ballad of Serenity