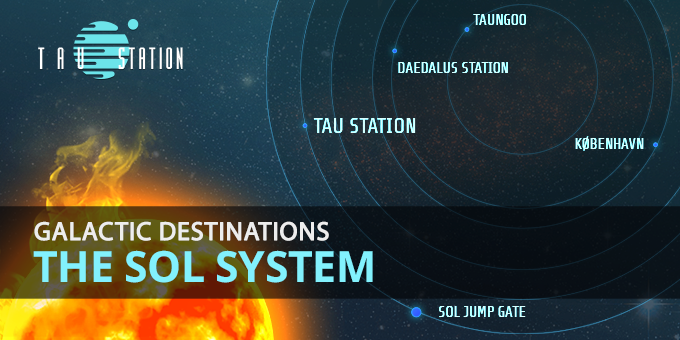 Often referred to as the cradle of human civilization, the Sol System, today, is synonymous with survival, reemergence, and the beginning of a new era for mankind. Join us on a short journey around the system while we present the various stations currently cradling our collective society.

First stop: Tau Station – The Jewel of the Consortium

One of the first stations to establish some semblance of stability after the Catastrophe, Tau is very much the patron station of awakenings, of stepping out of the shadows back into the light. Here, the Consortium reigns over the system with a shiny, chrome gauntlet of order and stability, offering a haven for travelers and settlers alike.

The shiny metallic sheen of prosperity and order is only slightly marred by a thin veneer of poverty, corruption, and the occasional clandestine operation within the Red Zones.

Next Port: København – A Shipwright’s Shipwreck

When the Catastrophe swept out over the Galaxy, she hit every port from a different angle, with a different kind of wave. Each destructive, each unique, each terrible. On København, where ingenious shipwrights and engineers crafted the galaxy’s very finest vessels, locals looked up to see a hellish rain of fiery ships. Some of these cruisers, ripped off their moorings by an unknown force, careened off into the Black, never to be seen again. Others, however, slipped down onto the station, through the hull and into the populated areas below.

Often a first port of call for those seeking to move through the system and beyond, here often is the place where those with wanderlust are first drawn to. Now, then, and forever more, København, the patron station of journey’s beginnings.

Daedalus – Where your one life awaits, as long as it is the only one!

When we first step out into the Black, when we gaze at the infinity of stars and glimpse our own insignificance, it can be daunting. That first step may turn into a flinch, a reflexive lurch backward, even a cower. This is what Daedalus represents. Home of Prometheus, who abhor cloning and the unnatural prolonging of life.

The galaxy is a cruel and unforgiving place. Embrace it, accept its decree on your life, no matter what. Daedalus, the patron station of embracing the void, taking comfort in the darkness.

In Taungoo we started to remember what it is to be human, for better or for worse. The Anima Foundation, who embrace rebirth and improvement of the self, push the gift of cloning through the galaxy. Death still hurts, but it’s now one of many stones in your journey across the pond.

Here, we again began to embrace our technological evolution with all its hiccups and excitements. Taungoo, the patron station of betterment, at any cost.

In Nouveau Limoges, we began to remember that it is not enough just to survive. Here, we began to think about freedom, individuality, and expression. The first station in the Sol System to be granted Gaulish independence by the Limoges Accords of 92AC, Nouveau Limoges finds itself in a unique collective mind-frame. Its denizens have always had a strong artistic passion and freedom of thought.

It is of little surprise perhaps, that it can be considered the patron station of revolution, both of the spirit as well as the mind.

Sol Jump Gate – First stop to the great beyond.

Punctuated by flashes of light that signify another ship traveling through the titanic wormhole outside, Sol Jump Gate is the last port of call out of the Sol System (or the first port of call into it). Here, travelers from the system mingle with those from the far corners of the galaxy. Lives, agendas, secrets, and stories flash like the light outside, blinking and then gone forever.

Journeys evolve into odysseys here, the familiar into the unknown. Sol Jump gate, patron station of thresholds, of the leap of faith.