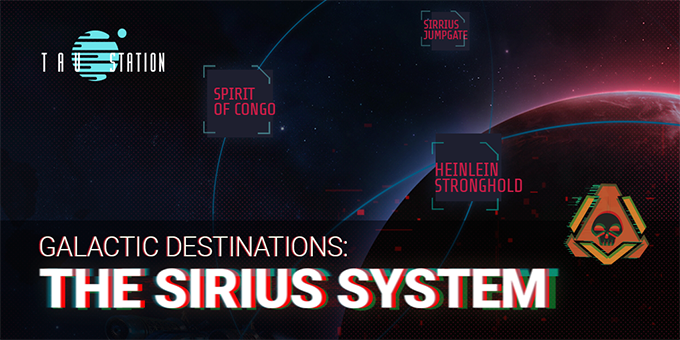 The Sirius System, these cycles, is anything but a serious place! This entire quadrant, whilst once a Consortium owned research and mining-centric part of the galaxy, quickly fell to Freebooter rule in the early cycles after the Catastrophe. The word, ‘fell’ is however, perhaps, incorrect in this case as the shift in administration, and I use the term in its loosest possible sense, was very much welcomed by most of the surviving population.

Two Stations, those of Heinlein Stronghold and House of Congo, along with the Jumpgate to this system, orbit a planetoid known as Greta Thunberg. It shares a circumbinary orbit between two stars and was reportedly named after a heroic Terran freebooter. It is said that, even as a child, she broke systems and rules for the good of her planet. Later, as an adult, she would lead millions in an eco-revolution and secure the safety of much Terra’s wilderness forever (at least, this is the case as far as we know it up to the Catastrophe). Today, the system very much shares a similarly rebellious mindset ever since its ’emancipation’ after the Catastrophe.

Facts are vague and we must rely mostly on hearsay but, what generally seems to be the consensus, is that Consortium protocol dictated that authorities fall back to the nearest safest location to assess the threat and possibly retaliate, putting the station’s inhabitants at a lower priority. While people died by the thousands, Consortium forces flew through the jumpgate that promptly shut behind them.

Perhaps by no coincidence, after the gate shutdown, a small fleet of smuggler ships, battered by their own ordeals, emerged from hiding. These vessels quickly took the opportunity to land on the stations and enact repairs (and perhaps some mischief) while no authorities were present. These smugglers found people struggling to survive, dying at the hands of their station’s own failing systems. Utilizing their already cunning hacking skills, the smugglers broke into and rebooted a number of these systems in order to save what remained of the populations here.

The system quickly and quite happily fell into Freebooter rule after this, with more un-factioned vessels and crews making their way to the unaffiliated system and steadily adding to the flagging populations. Freebooter ideology and culture quickly spread throughout the Sirius system and each station became a haven of lawlessness and hedonism in its own right.

What small measure of overall administration exists was left to the original group of smuggling hackers (and their eventual chosen successors). It is, perhaps, the first time in recorded history that governance of a quadrant is enacted both in anonymity and via cyber-criminology! Systems are maintained and altered via hacking, as is the availability of high level luxury software and markets.

Finally, and perhaps most importantly, the entire system is able to maintain its contumacious status quo thanks to the efforts of these ‘hacktivists.’ Delving into the systems of Heinlein Stronghold, which once served as a research facility for the two binary stars, the group discovered a number of probes that could be utilized to create energy surges within the stars. These surges could be increased way past the levels they originally were programmed for, which could cause the stars to deviate from their delicately balanced cosmic dance and, most likely, spread incalculable levels of destruction throughout the entire system.

The Freebooter collective of Sirius gleefully refers to the entire affair as “The Apples of Discord,” named after an ancient Terran myth regarding Eris and the Gods of Olympus. Quite smugly, they waggle a finger of mutually assured destruction at any Consortium or Gaulish forces that may cast their collective gaze at the stations of this system.

Travel is, of course, allowed through Sirius. However, a fairly steep “non-disclosure donation” is encouraged for all non-Freebooter vessels. Those lacking in generosity of spirit find their vessel’s Nav-ID subsequently broadcast throughout the system.  Freebooter pirates are renowned for their dogged pursuits of potential victims!

In closing, it should be noted that not all freebooters are pirates or possessing of the criminal element. Some have been reported to possess hearts of gold! Though, in all likelihood, they were stolen from somebody else.