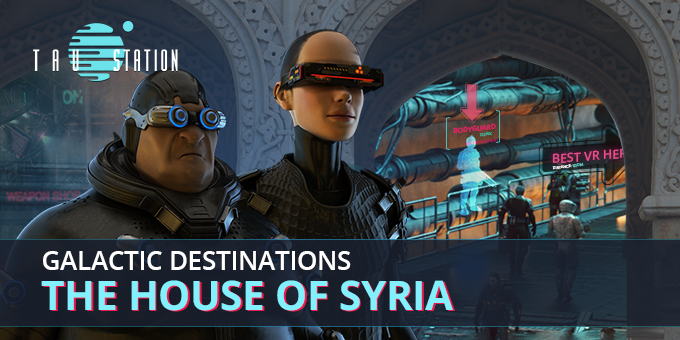 As engineers continue to realign the Ross 154 Jumpgate and bring us one jump closer to this branch of the galaxy, we glean some more information on the destinations it holds. This segment, we introduce you to the House of Syria!

The House of Syria is one of four stations of the Ross 154 system and the second (and, currently, last here) bearing allegiance to the Consortium.

While both the Jump Gate itself and The House of Syria are, as mentioned, Consortium, the local denizens view the former as the ‘strict, older brother’ as the feeling in this station is a little more open and less structured. There is even a loose friendship with certain factions of Freebooters for ideas and tech.

It is, in fact, their strong connection to technology that allows The House of Syria such freedom and flexibility. We understand that much of the station utilizes and benefits from fairly sophisticated Omni Reality software and that a large bulk of the station’s beauty is best seen through one’s CORETECHS!

A bulk of the station’s culture is taken up by OmReAthletics, (OmRe standing for Omni Reality) a hobby that it shares with its elder sibling, the Jump Gate. A central amphitheater dedicated to various types of OmReAthletic events is one of the most visually stunning pieces of architecture on the station. Indeed, large numbers of citizens  can often be seen sporting OmRe Headsets and haptic suits. There appears to be a general ideology that, while the CORETECHS is indeed sophisticated enough a technology to allow one to compete, the true “O-thletes” invest in dedicated hardware.

Another interesting idiosyncrasy we have noted is that language and communication have evolved in a rather unique way here. Due to the relationship with the system’s independent station, Le Guin Stronghold, (more on that soon) a particular shift in speech patterns incorporates  what appears to be a dialect designed for more emotional openness and semantic transparency of intent.

With the Jumpgate’s alignment almost complete, we hope to be on one of the first shuttles over as we look forward to exploring the unique facets of The House of Syria as soon as possible!