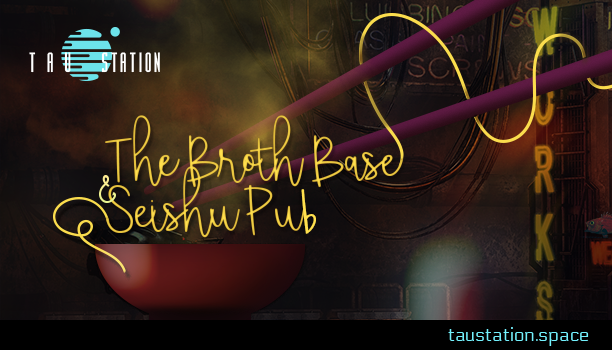 In our ongoing effort to provide a glimpse into some of the unique places you’ll find on your journey through the universe of Tau Station, we offer our latest installment of our Galactic Destinations series, The Broth Base & Seishu Pub of Taungoo Station. Like our previous entry, The Mermaid on Kobenhavn, The Broth Base & Seishu Pub is an inn catering to all forms of trader, wanderer, and traveler. But unlike The Mermaid, Taungoo Station’s inn features something that travelers can find nowhere else: Taungoo Noodles, the delicacy known throughout the universe as culinary art.

The Broth Base & Seishu Pub

Strategically placed near to the station port to attract visitors, The Broth Base & Seishu Pub beckon to the passerby with aromatic steam billowing from the entrance and as condensation against the windows. Bright notes of vegetation collide with the warm spice of Sinclair Biomeat products, both imported from the faraway Ghost of Mali, as a coaxing song of temptation rooted around the subtle twists of the Taungoo noodle. The noodle is the star of the dish and the ancestral secrets in the art of preparation are closely guarded.

The Broth Base & Seishu Pub, like much of Taungoo Station, is a place awash in crimson and gold. The culture of the station is an old one steeped in oral history, folklore, and tradition and nowhere is that more evident than in those places people gather: most notably, this, the station’s most popular inn. It’s a perfect place for a space-weary traveler to stay a few nights by booking a room.

Types of noodle dishes vary on Taungoo Station. In the market, The Arcade of Scent, one can approach a vendor for a cup of ‘standing noodles’, noodles prepared with eating on-the-go in mind. The convenience of the cups offers variety of family-secret flavors, some savory and some sweet. But the most relaxing experience is found at The Broth Base & Seishu Pub with a bone bowl filled with ‘sitting noodles’ and an ice-cold pint of Seishu beer. The chairs on which patrons sit are ancient and from time-to-time a waiter will remark on the history in the moment: dining on an ancient, pre-Catastrophe family-passed recipe on ancient pre-Catastrophe chairs. The atmosphere is as enticing as the steaming bowls. The warmth of glowing lanterns dangle overhead, stagnant in the air of steam and smoke.

Chatting up the locals while buying a round or two can help improve your social skills. Conversation and laughter flow comfortably between the customers while the relatively new tenants on the station, Anima Foundation, are often in the inn, but separate on their lunch breaks. The guards of the Administration, the Kyarr, usually occupy a table or two and are commonly related to the families of the noodle tradition. The community, like each noodle dish, is tight-knit and composed of a specific balance of elements which makes it uniquely Taungoo.