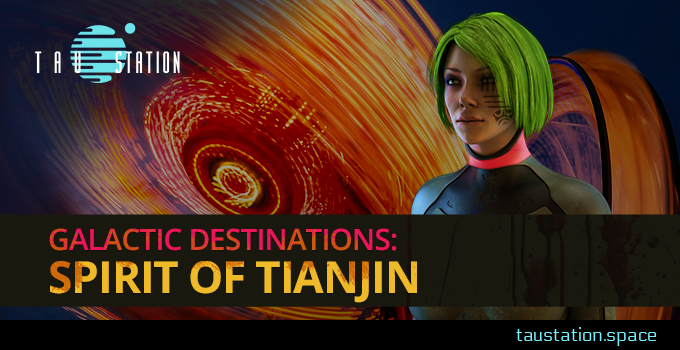 Today’s dispatch comes from the binary system of L 726-8, and one of the galaxy’s most controversial stations. Once dedicated to science, the Spirit of Tianjin is now famous for something far stranger: its unique ‘Carnival’, where nothing is forbidden to the wealthy Patrons. Debauchery is a luxury product here!

In the Carnival, other participants are the Patrons’ playthings. No laws or taboos restrict these interactions. Those who serve are dubbed ‘Actors’ and ‘Dummies’. Protected only by a clone back-up, their time on Tianjin is usually memorable; but not always in a good way.

Below we publish an extract from the log of Cha-Cha Barriss. One of Tianjin’s newest ‘Dummies’, Cha-Cha gives an insight into her first tenspan working the Carnival.

They said yes! Carnival Dummy application accepted; yeah baby! For once in my life I’m gonna make serious credits. A few cycles working this freak show and I’ll be all set. Buy myself that rock hopper I always dreamed of, spend my days seeing the stars!

Things are getting busy here. Loads of training and I had to sign a TON of legal waivers. Now I can’t sue anyone, no matter what they do to me here. But on the plus side, I already made more cash in 3 days than I did the whole last cycle scrubbing shuttle cabins…

Finally get my collar tomorrow. Dummies get a red one. Actors get green, and Patrons have gold bracelets. That way we all know who’s who. After that, I’ll be ‘in service’. Wish me luck!

I think I’m getting the hang of this now. Here’s the lowdown:

I’m on duty for 50 segments of every day. Get my red collar on and go see what sorta mood the Patrons are in. Usually I hang out in the Inn, but not always. It doesn’t take long before one picks me up. I got novelty value, I guess. Maybe the tattoos catch their eye?

As for the sordid details? I’m not allowed to say much. Rich people don’t like having their secret kinks made public. But so far, it was what I expected. Most Patrons just like the power trip of being able to do what they want with us. They round up a few Dummies and get us doing stupid stuff… One drunk made us play Russian roulette yesterday. But he passed out from the booze before any of us copped it.

OK, I gotta go. Need some rest before the madness starts all over again tomorrow. I’m starting to miss Hopkins!

Well, it had to happen sooner or later.

To be honest, I don’t remember much. Some whack job Patron made an obstacle course; then got a kick racing Dummies through it. They got a space for this kinda stuff; call it ‘The Theater’. The thing was full of traps and, of course, we didn’t know where…

Next thing I knew, I woke up in the Clone Vats. In my rehab session, I met a guy who’s been a Dummy here for 12 cycles. Reckons he’s been through 300 clones in that time. He takes memory suppressors but still… I wouldn’t wanna spend a day in his head.

Anyway, I don’t plan on being here that long. 3 cycles max.

I’ve not been through the Clone Vats since the last time I wrote, but I’ve been patched up in Sick Bay a few times. Always come out good as new physically but, mentally, it’s another story. Like most of the other Dummies, I’ve started taking memory suppressors. It helps a little, but I still get weird dreams.

Don’t get me wrong; it’s not all depraved here. I think most of the Patrons just come for escape, from whatever’s keeping them from being their true selves elsewhere. Hell, half of them just wanna play the hero for the day. Got all sortsa ‘scenarios’ here for that too!

Anyway, I’m not complaining. I chose this, and they sure do pay good. But one thing’s bugging me. Whoever runs this place knows a lotta rich and powerful people’s secrets. I know they advertise ‘discretion’ but don’t tell me they aren’t doing anything with it all?

Enough with the conspiracies. Two more tenspans, then I’ll visit Hopkins. I’ll need a break by then; this Carnival is making my head spin!