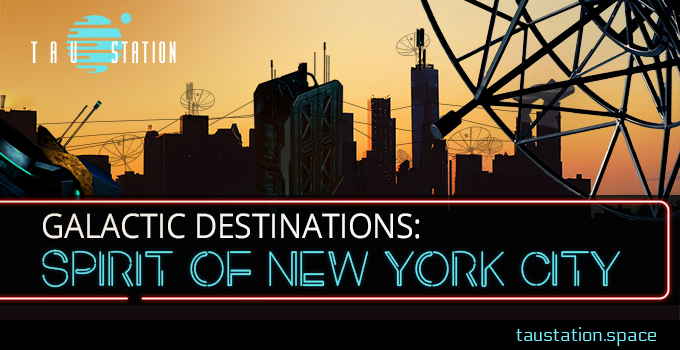 This cycle’s dispatch orbits around the Spirit of New York City, a station within YZ Ceti and part of a group of stations colloquially referred to as the Iron Quad. Back in the Before, this station enjoyed some of the more relaxed and froody vibes of the galaxy. Mellow bars, dazzling art installations, and cafes galore adorned every corner of the the station that sought to emulate the spirit of its namesake.

Things have changed since the Catastrophe. Land on the Spirit of New York and join us as we saunter through its faux-cobble streets as we explore the reclusive and paranoid station that it is today.

The contrived atmospheres of the Spirit of New York that sought to recapture a time of culture and relaxed cynicism are now only evident in the stylized and overtly jaunty decor of the now re-purposed bars and bodegas of the station. Now part of the Iron Quad, the Spirit of New York is one of four Consortium stations known far and wide for their secretive research and development.

However, while the other stations in the system seem to be quite clear in their respective roles, the only tangible function here seems to be observation. Every inch of the exterior of the station is covered in scanners and antennae of all manner and shape, from gigantic dishes that obscure entire sections of the hull to arrays of data collection nodes that spread out like a tiny carpeting of metallic moss.

Some note that in particular, many of the larger observation devices seem to be perpetually aimed at the planetoid which the station orbits, as if keeping some secret and silent vigil on what lies below. All we know for certain however, is that the Consortium, or at least those that run the Spirit of New York City, remain entirely tight lipped about the whole affair. A palpable feeling of paranoia greets anyone not directly affiliated with the Consortium and their military divisions.

Whatever it is that the Consortium are watching so keenly, they would be wise to note that when all eyes are pointed outward, there is much that goes unseen within! As a famous philosopher from bygone times reportedly stated:

“New York is an exciting town where something is happening all the time, most unsolved.” Johnny Carson