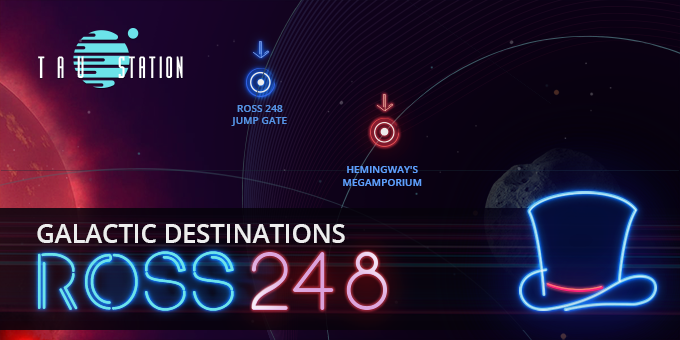 To the largest extent, we are reestablishing contact with more and more star systems as astro engineers work ceaselessly to reconnect bridges via jump gates. With each new system, a new bridge is brought back into the fold, with new connections to other systems. Slowly, hopefully, we continue to reclaim far flung communities separated in the Black during the Catastrophe.

Occasionally, however, the link is already open, but travel is hindered by some other aspect. Sometimes it is control of the route by Freebooters, for example.

In the case of Ross 248 however, it is down to corporate policy and negotiations with a quantum level of complexity when it comes to fine print!

Join us this segment as we learn a little about this, hopefully soon to be accessible system and home to Hemingway’s Hyperdashery!

The point above about the contract is quite literal, one legal team (of many) reportedly discovered print so fine that it has been written entirely on one single digital molecule of the expansive document. Hemingway’s Intergalactic Retail Privilege Intake Division (Int.Re.P.i.D) is notoriously meticulous when it comes to negotiations and retail rights, elevating legal documentation to an art-form on par with the crafting of epic sagas.

We are told, however, that governmental legal teams are slowly being whittled down in terms of willpower, and soon they will acquiesce to all stipulations, allowing for travel to the enterprising system.

Ross 248, also known as HH Andromedae, itself is a red dwarf star system that, at approximately 4000 light years, is relatively close in proximity to Sol. Two local stations orbit a small exoplanet known as Tartarus, itself a designated waste planet.

Much of Hemingway’s initial wealth was apparently derived from the taxation of waste dumped on Tartarus.

Hemingway’s Megamporium is the main station of the system, with the Ross 248 Jump Gate being the other. The Megamporium is a haven for all sorts of luxury retail experiences, be they physical, experiential, or even Omni in nature. Current negotiations are ongoing to allow other corporations legal Rights of Vendor on the Jump Gate itself.