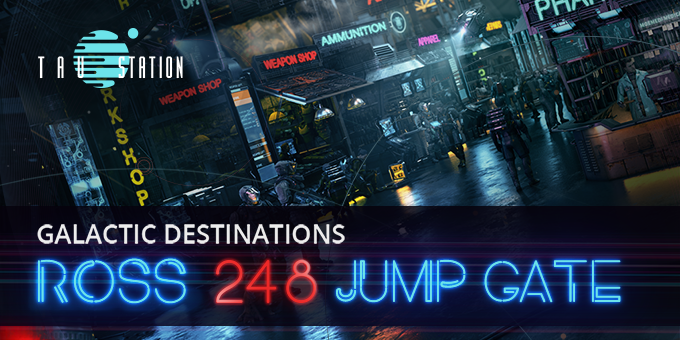 Hemingway’s Hyperdashery welcomes (in their, highly researched and optimized own words) both the intrepid traveler and savvy corporation alike to the Ross 248 system, the ultimate galactic hub of everything retail. Today, allow Galactic Destinations to whisk you away to the glamorous Jump Gate of Ross 248 where visitors and corporate vendors ply their trade under the watchful gaze of their Hemingwarian Hosts.

Ross 248 is a system that was quite cunningly monopolized by Hemingway’s Hyperdashery, purveyors of luxury galactic goods. This was achieved through a mixture of legal wizardry, cunning manipulation of services (namely the use of the planetoid Tartarus as a galactic waste dump) and, when all else failed, throwing millions of credits at any obstacle till it buckled under the strain of sudden affluence.

The main station, Hemingway’s Megamporium, enjoys complete autonomy in regards to governance as well as retail rights. Here, only Hemingway is allowed to ply their wares, usually at top credit and without any competition in sight.

However, in magnanimous entrepreneurial spirit born of keeping your enemies close and, preferably at each other’s throats, the Hyperdashery has decreed that the Jump Gate itself is open to everyone else for business. Here, the corporations of the galaxy have established their galactic retail hub, in close and common orbit with their hosts and competitors on the Megamporium.

Hemingway’s has even gone so far as to provide incentives in the way of tenspanly releases of profit numbers, arranged by best to worst and prizes (to promote competition) for the corporations that perform the best. An area has also been designated for corporate team building in the form of friendly wargames with the (increasingly lethal) ordnance and subsequent cloning provided generously by Hemingway’s themselves.

The Jump Gate is the place where visitors can peruse and find items from almost every corporation out there. Alternatively, they are encouraged to continue on to the Megamporium where the better versions of everything they find are available!