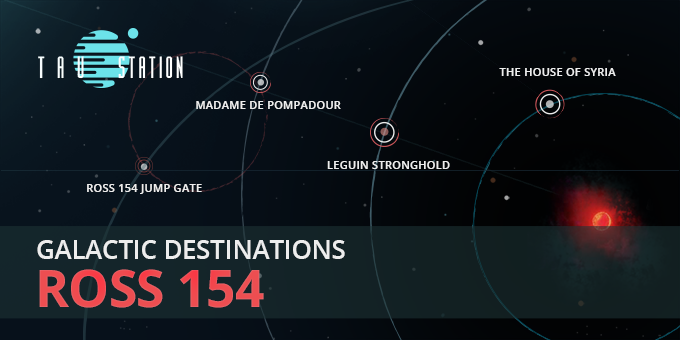 We have recently reestablished contact with Ross 154, a distant system whose jumpgate is soon to be accessible once more. It is the perfect example of how evolution, be it social or otherwise, works in the vacuum of separation.

The stations of Ross 154 consist of Leguin Stronghold, House of Syria, Madame de Pompadour, and the system’s jumpgate station. If initial communications are to be understood, (and it has proved a challenge) there exists a fascinating dichotomy in a number of ideologies here. Social currency, semantics, even meaning in some cases, have all evolved slightly differently on each station, during their collective time apart from each other and the rest of humanity.

This has led to a number of difficulties in subsequent communications and even trust of one and other. This is especially pertinent as the system contains two Consortium stations (The house of Syria and Ross 154 Jumpgate), one of the Gaule Protectorate (Madame de Pompadour), and one that is maintaining an independent status (Leguin Stronghold).

While initial information is unconfirmed, there does seem to be a fair amount of contention towards Leguin Stronghold’s Independent status, with both other factions vying to bring it into the fold. The communicational idiosyncrasies of each station, however, provide a barrier and fascinating challenge.

We shall be keeping an ear out for developments as we await the gate engineers ok for travel to this new system. Hopefully, communication barriers will be breached and the shores of understanding colonized! Watch this space for our upcoming segments on each station itself.