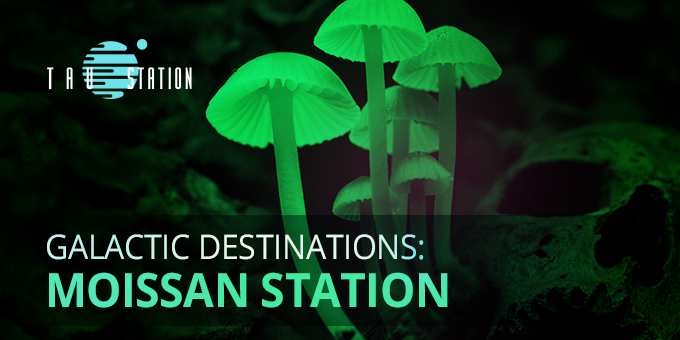 Look around when you have got your first mushroom or made your first discovery: they grow in clusters.

Welcome to Moissan Station dear listeners. Tonight, Galactic Destinations takes you to a station that truly understands the meaning of life after death. Stick with us for a segment and listen to a tale of tragedy and rebirth, success from failure, and life from death!

Before the Catastrophe, Moissan Station was the true gastronome’s destination. Its endless bays of food printing machines churned out a sea of every imaginable edible delight on a daily basis. A never-ending stream of shuttles transported these delicacies around the galaxy or, more often than not, those with the credits to spend right to the source itself.

The Catastrophe struck with merciless accuracy. On Moissan, the gigantic food processing units fell silent. No matter what effort enacted by the engineer chefs, these behemoths of gastronomic production lay silent and lifeless, refusing to replicate even the smallest, tasteless of morsels.

Very soon, starvation set in. Thousands died during those darkest of cycles, buried in mass graves in the ruins of the once opulent and much visited city center.  These makeshift cemeteries, often spanning an entire thoroughfare, would serve as grim reminders of the fallen, and, soon after, as actual salvation for those left behind.

By some combination of the organic and decaying matter beneath and the uniquely nutrient rich atmosphere above, the ruins that housed these mass graves soon began to give life to a plethora of spores, mold, and fungus. This area with the darkest of histories was soon awash in every color and bio-luminescent glow nature could conceive of.  Even more miraculous, many of these mycelial blooms were edible! In a tragically poetic turnabout, the remaining population would be saved.

There are those that postulate that this timeline is fraught with inconceivable mistakes, that the molds and mushrooms would not have been able to grow in time to save anyone. These same individuals would have us believe that some clan of cannibals has existed through the cycles on Moissan. But in the vacuum of space, a vacuum of knowledge will often be filled by the biggest and most ludicrous of tales. The simple truth is, we just don’t know exactly what occurred during those dark cycles.

What we do know is that today Moissan has begun to flourish, buoyed by a burgeoning trade in mycelial materials that are useful in everything from ration production to construction. This historic station truly is the epitome of natural balance. From death comes life, from hunger, sustenance, from adversity, triumph!